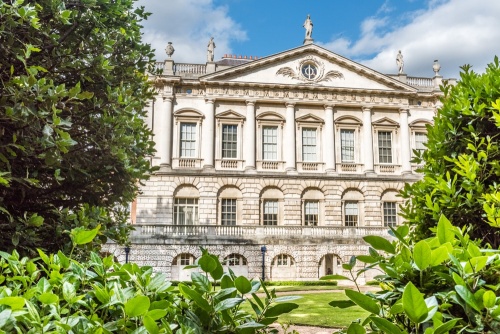 Spencer House from Green Park
Spencer House is the London home of the Spencer family, and boasts a superb art collection, showcased in one of the most beautiful and influential neoclassical interiors in 18th-century England.

Spencer House was begun in 1756 by John Spencer, who hired John Vardy, a pupil of William Kent, to create a setting for entertaining fashionable London society. Vardy created the exterior facade and designed the ground floor rooms.

In those days an architect was often expected to design not only the building but its interior decoration, and Vardy turned his hand to creating some of the furniture for the new suite of elegant rooms.

Then in 1758, Spencer called in James Stuart, dubbed 'The Athenian', to complete the house. Stuart had just returned from touring historic sites in Greece, and he applied his knowledge of authentic Greek design to the interiors of Spencer House, creating one of the most influential forays into neoclassical design to be introduced into England; a house that would influence the style of many of the great English stately homes of the next 100 years.

When the 1st Earl Spencer died in 1783 the architect Henry Holland was called in to remodel the interiors. Holland would go on to create nearby Carlton House for the Prince Regent, but at Spencer House he added to the Greek feel of the interiors, with scagliola marble columns, and massive mahogany doors.

The next major phase of building came in the 1840s when Philip Hardwick was called in to redecorate the ground floor and first floor. Hardwick's work on the ground floor was itself redone in the 1870s by the French architect Barbier.

It will be obvious from the short timeline given here, that Spencer House was designed and redesigned as fashions changed, but at its core it is still the elegant Georgian neoclassical house that the 1st Earl would have recognised. 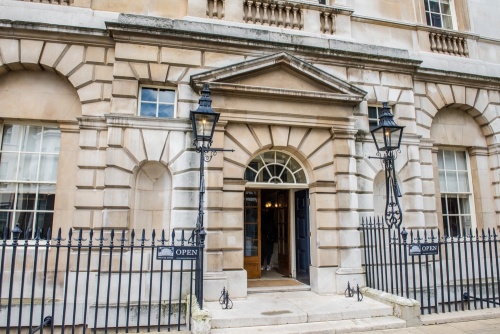 The house was let to tenants several times in the 20th century, and many of the contents moved to the Spencer family seat at Althorp in Northamptonshire. Not only furniture was removed; during the Blitz in 1942 fixtures including chair rails, doors, and chimney pieces were taken away for safe keeping. After the war, the premises were used by the Christies auction house, and then leased to a succession of companies who used the space as offices.

Much of the house is still let out as office space, but 8 state rooms have been restored to their 18th-century splendour, and are regularly open to the public. The restoration was aided when Queen Elizabeth II loaned 5 paintings by Benjamin West from her own collection to help present the interiors in their resplendent historic best.

As of this writing, Spencer House is open to the public on Sundays and on specially arranged private tours Please check the official website for exact opening details.

We took one of the Sunday tours, which included only the interior rooms, not the gardens. Unfortunately, we were not allowed to take interior photos, which is a real shame as the restored interiors are simply stunning.

One of the things that became very clear during the course of the tour is just how much had to be restored after WWII. So many fittings were taken to Althorp for preservation, but never returned to Spencer House after the end of the war.

Every detail, down to doorway mouldings and chair rails had to be recreated, often using casts from the original fittings now kept at Althorp. The result is wonderful. Unless you were an expert in Georgian design you would never know that most of what you see is a modern replica.

As ione final note, one of the best views of Spencer House is from Queen's Walk, the pedestrian path on the eastern edge of neighbouring Green Park. The Spencer House gardeners trim the trees and shrubbery borderng the park to create excellent viewpoints of the house's west facade. The view from Green Park is much better than the view of the house entrance on St James' Place.

The easiest way to reach Spencer House by public transport is from Green Park tube station. Take the Piccadilly exit and turn right. Pass the Ritz Hotel, turn right on St James Street, and right again onto St James Place. spencer House is at the far end of the street, on the left. From the tube station exit to the Spencer House entrance is no more than 8 minutes easy walk.

More self catering near Spencer House >>