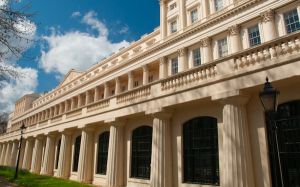 Clarence House from The Mall

The official London residence of the Prince of Wales and Duchess of Cornwall, Clarence House stands on The Mall, beside St James's Palace. The house was built by John Nash for Prince William Henry (later William IV) in 1825. It is open to the public during the summer months.

In 1825 the Duke of Clarence, later to become King William IV, commissioned architect John Nash to create a new residence connected to St James Palace because he found the palace too cramped for his liking. Nash, the architect of nearby Buckingham Palace, created a 4-storey building in gleaming off-white stucco. The house exterior that we see today resembles very little the original design, for it has been remodelled and updated numerous times over the last century, especially after the Second World War.

William passed the residence to his sister Princess Augusta Sophia, and from her, it passed to Princess Victoria (Mary Louise Victoria of Saxe-Coburg-Saalfeld), mother of Queen Victoria. In 1866 it became the official residence of Queen Victoria's second son, Prince Alfred, and when he died in 1900 it passed to his younger brother Prince Arthur, Duke of Connaught and Strathearn.

During WWII the house was used as a Red Cross base and by the St John Ambulance as their war headquarters. The building suffered heavy bomb damage and it took several years to repair the house. Princess Elizabeth and her husband, Prince Philip, moved in after the War, and it was at Clarence House that Princess Anne was born in 1950. When Elizabeth took the throne as Elizabeth II in 1953 Clarence house became the residence of Elizabeth, the Queen Mother. And when the 'Queen Mum' died the house passed to Prince Charles, Prince of Wales.

The main rooms of Clarence House are used for official receptions and welcoming official visitors to Britain. The rooms display works of art from the Royal Collection and from the Prince of Wales' own collections. Despite this recent 'personal touch', much of the interior has been restored to the way it looked when the Queen Mother lived here. The arrangement of rooms is the same, and many of the personal objects and artwork are placed as the Queen Mum left them.

The house is open for 1-2 months each summer. Visitors can book tickets for guided tours through the Royal Collection website. The tours take visitors through 5 rooms on the ground floor and include a formal front garden designed by HRH the Prince of Wales in memory of the Queen Mother. Tours last 45-60 minutes and take fine through the Lancaster Room, Morning Room, Library, Dining Room, and Garden Room.

Among the artwork on show to visitors are works by important 20th-century artists like Augustus John, John Piper, and Graham Sutherland. Also on show are fie ceramics, silver, and English porcelain, with many pieces have a strong connection to the Bowes-Lyon family. 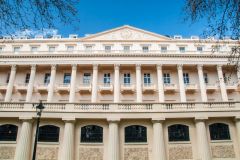 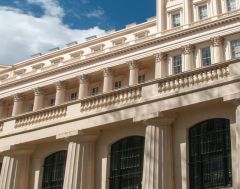 More self catering near Clarence House >>