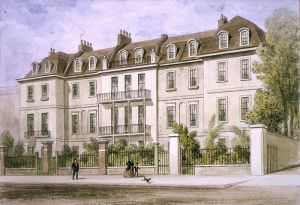 An elegant 17th-century townhouse in fashionable Chelsea, Lindsey House is built on the site of Sir Thomas More's garden. The National Trust tout Lindsey House as having one of the most attractive 17th-century exteriors in London.

In the early 16th century, this area of Chelsea was a quiet backwater, a rural retreat from the pressures of London life. Its most famous resident was Sir Thomas More, Henry VIII's Lord Chancellor. More, whose memorial stands outside nearby Chelsea Old Church, had extensive gardens beside his riverside residence.

After More's death, the site of his house and gardens were put to other uses. In 1674 the 3rd Earl of Lindsey built a fashionable villa on the site of More's gardens. It is thought to be the oldest house in Chelsea. There is the possibility that the main farmhouse on More's estate was incorporated into Lindsey's new house, which would make it even older.

The 17th-century house was renovated in 1750 by Count Zinzendorf for London's Moravian community, and divided into 4 separate houses in 1775 so that it now spans nos. 96-101 Cheyne Walk and the dwellings have distinctly different exteriors.

Lindsey House originally stood directly beside the river, but when the Chelsea Embankment was built in 1874 to create a modern sewage system for London the house found itself well away from the water.

Behind the house is a small garden designed by Edwin Lutyens and Gertrude Jekyll. The narrow garden strip features a lily pond and a mulberry tree, surrounded by a colonnade, with ornamental statues.

Though Lindsey House is owned by the National Trust, it is inhabited by tenants and is therefore usually open only for London's annual Open House weekend. It is easy enough to walk by the front of the house, but the last time I did so there was a large security fence at the sidewalk, obscuring much of the house, which was a real shame.

The easiest way to visit Lindsey House is to walk from Sloane Square tube station (District Line). Follow King's Road to Oakley Street, then turn right onto Cheyne Walk. Follow Cheyne Walk along the river bank, past Chelsea Old Church. Cross over Beaufort Street and you will see Lindsey House directly in front of you. 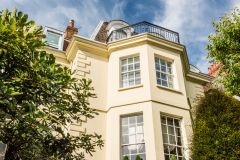 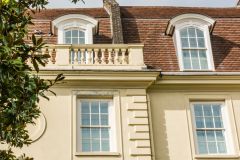 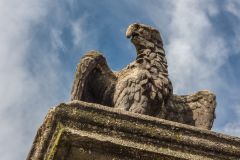 More self catering near Lindsey House >>