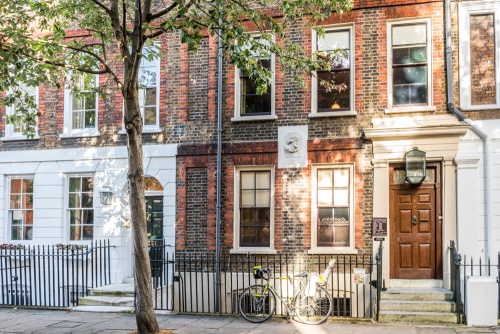 This Queen Anne house was the home of Thomas Carlyle, the “Sage of Chelsea” for 47 years until his death in 1881. As a historian, social writer, thinker and public speaker, Thomas is honoured in the house, while his wife Jane’s brilliant wit and gift for writing are recognised through her many surviving letters. The Victorian period decor is still very much in place, where an evocative atmosphere allows visitors to experience Thomas and Jane’s academic and domestic lives. 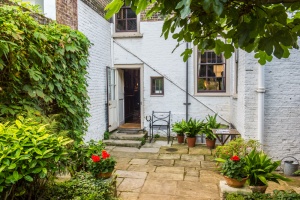 The rear entrance to the house

Thomas Carlyle was a writer and philosopher, essayist, satirical writer, and historian; a 'man of letters' as he was called by Victorian society. He and his wife Jane lived in this unobtrusive terraced house on Cheyne Row in Chelsea, just yards from the River Thames, and here they welcomed the brightest lights of literary London.

The couple moved into the house in 1834 and stayed there until their deaths (Thomas in 1881 and Jane in 1866). The house retains much of the couple's original furniture, paintings, and photographs.

Carlyle was known as the 'Sage of Chelsea', and feted by the most fashionable people in London society. Charles Dickens came here to socialise, as did John Ruskin, Alfred, Lord Tennyson, William Morris, and many more literary greats. Carlyle was the Victorian equivalent of a modern pop star.

Dickens famously said of Carlyle, 'I would go further to see Carlyle than any man alive!' He also used Carlyle's work 'The French Revolution: A History' (1837) as the historical basis for his novel A Tale of Two Cities. Carlyle's social commentary made him something of a hero among social reformers, but later in life he distanced himself from those views, attacked democracy, and suggested that slavery had been a force for social good.

One of the wonderful things about Carlyle's House is that Thomas's wife Jane gets equal billing. Jane Carlyle (1801-66) was not a shadowy figure, lurking in the background as a dutiful Victorian wife. She is considered one of the great letter-writers in 19th century England, and her voluminous correspondence can be studied in depth. Much of her writing is now digitised and can be accessed online through the National Trust website.

Jane Carlyle left her mark on the house, too; you can see a decoupage screen that she created decorated with poignant Victorian prints, and the sofa that she bought to surprise her husband. There are numerous information sheets throughout the house detailing her troubles with family servants and her opinionated views on society figures. 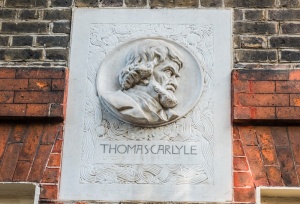 Bust of Carlyle on the front facade

One of the more peculiar rooms in the house is the 'sound-proof' study, crammed into the attic space. This is a very Victorian room, with pale pink wallpaper and dozens of framed prints lining the wall. Carlyle had the study built with an air cavity on all sides to buffer the sound from outside.

Carlyle's House has been restored as it would have looked in the 1850s, using a painting by Robert Tait as a model. You can see the painting on display inside the house; it was titled 'A Chelsea Interior ' (The Carlyles at Home with their Dog Nero; 5/24 Great Cheyne Row, London) and exhibited by Tait at the Royal Academy in 1857-8. Beside the painting is a copy of Jane Carlyle's letter to a friend telling how tedious it was to have Tait endlessly hovering about, sketching and painting.

Behind the house is a small walled garden, and just around the corner is Chelsea Old Church, where Sir Thomas More had a private chapel. A statue to Carlyle stands in Chelsea Garden, close to the river.

It ought to be easy to find Carlyle's House; it is, after all, just off Cheyne Walk and stone's throw from the riverside. But the street names do odd things in this area, and I found it a challenge. Judging from the National Trust website, other visitors also find it challenging! The house is a few yards up Cheyne Row where it heads away from the river, on the right hand (east) side. The house exterior is marked by a white marble plaque with a portrait of Carlyle.

Do not come expecting to see a grand stately home; this is a comfortable house, a quiet Victorian home, modestly decorated, but full of historic interest for one of the most influential writers of the Victorian era. It is fascinating to compare 24 Cheyne Row with Carlyle's humble birthplace in Echelfechan, Dumfries and Galloway.

Unfortunately, we were not allowed to take photographs inside Carlyle's House, so we had to content ourselves with photographing the front facade and the rear garden. I hope this gives some idea of the house, which was an absolute delight to visit.

Carlyle's House is halfway down the street on your left. It is an unobtrusive building, and you may walk right past it unless you keep a sharp eye peeled for the small National Trust sign. It will take at least 15 minutes to reach the house from Sloane Square, but it is by far the closest tube station. 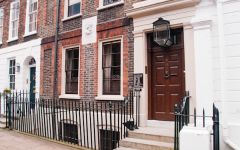 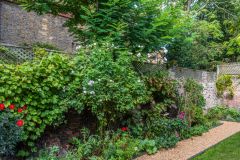 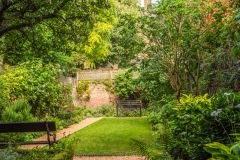 More self catering near Carlyle's House >>