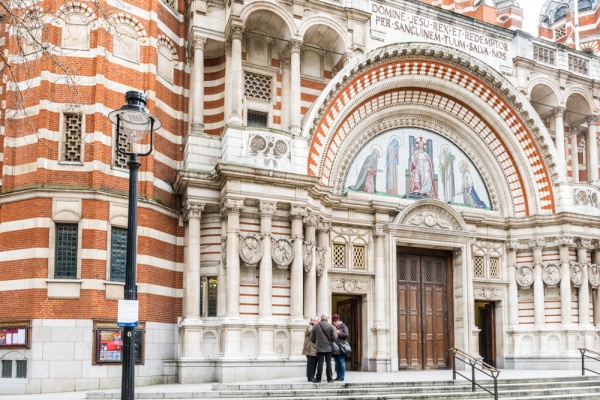 The most imposing and most important Catholic church in England, a marvel in multi-coloured brick. Westminster Cathedral (not to be confused with Westminster Abbey!) was designed by John Francis Bentley in extravagant Byzantine style. It was begun in 1895 and finished 8 years later.

After the religious turmoil of the Reformation, Catholic worship was either banned outright or at least heavily curtailed. It was only in the late 19th century that Catholics began to be allowed to worship freely in the UK and the Catholic Church was officially re-established in Britain.

The newly established Catholic hierarchy wanted a mother church for the religion. In 1884 land was acquired in Westminster, on the site of the Tothill Fields Bridewell prison.

Construction began in 1895 and the cathedral opened its doors in 1903, even though Bentley's extraordinarily opulent interior decoration was still incomplete. Bentley himself never saw his vision realised; he died in 1902.

What he created, however, lives on, as one of the most striking and impressive examples of neo-Byzantine architecture in Europe. The cathedral is striking for its use of bands of coloured brick and stone on the exterior, its tall and eye-catching bell tower, or campanile, and the richly decorated interior, following the Byzantine tradition of mosaic and marble. 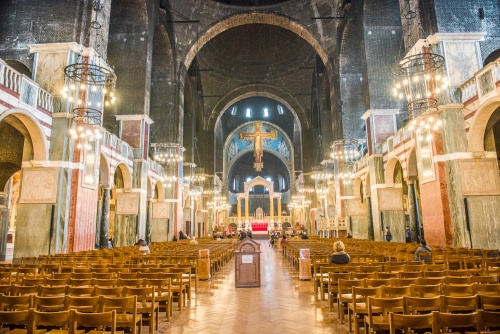 The dominant feature of the interior is a massive baldacchino, or sculpted canopy, above the high altar, made of white and coloured marble, pearl, lapis lazuli, and gold. Throughout the chapels are colourful mosaics in Arts and Crafts style, created after Bentley's death.

One of the historic highlights is the shrine of St John Southworth in the Chapel of St George and the English Martyrs. Southworth was executed for his Catholic faith at Tyburn in 1654. His body was brought into the cathedral in 1930. In the same chapel is the last carving made by Eric Gill, depicting Christ on the Cross flanked by St Thomas More and St John Fisher.

In the Chapel of St Gregory and St Augustine is the tomb of Bishop Richard Challoner (1691-1781), who is known for founding schools and charities for the poor. His translation of the Old and New Testaments remained the standard English translation for English Catholics for 200 years. Challoner narrowly escaped murder in the anti-Catholic Gordon Riots in 1780. In the same chapel is the tomb of Cardinal George Basil Hume (1923-1999), who served as the ninth Bishop of Westminster from 1976. 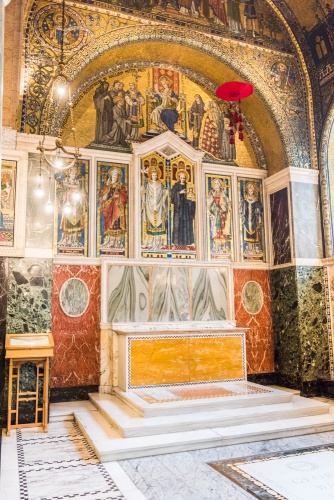 The Chapel of St Gregory
and St Augustine

Westminster Cathedral is the seat of the Archbishop of Westminster and the mother church of the Catholic religion in England and Wales. In 1977, as part of the Silver Jubilee celebrations to mark 25 years on the throne, Queen Elizabeth II visited the cathedral. This visit marked the first visit by a reigning monarch to a Catholic church since the English Reformation.

The Cathedral really has no parallel among English churches great or small; the style is unique on these shores.

The cathedral is within walking distance of Westminster Abbey, and it is tempting to see one after the other to compare the two buildings. The nearest tube station is Victoria, about 5-minutes walk away. The cathedral is usually open daylight hours and is generally quite busy. There is no entrance fee, and visitors of all faiths are free to explore the building, but do be respectful of worshippers. For a small fee you can climb the campanile for fabulous views across London. 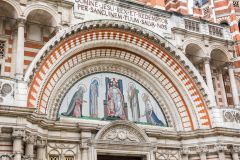 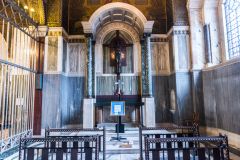 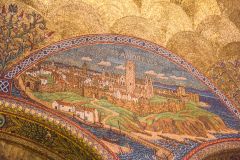 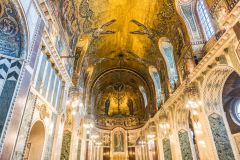 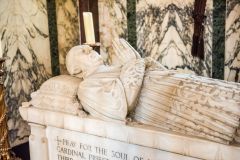 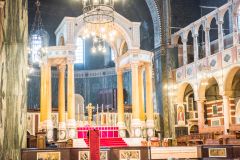 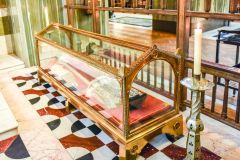 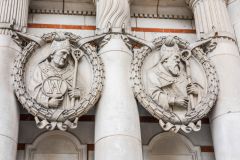 More self catering near Westminster Cathedral >>