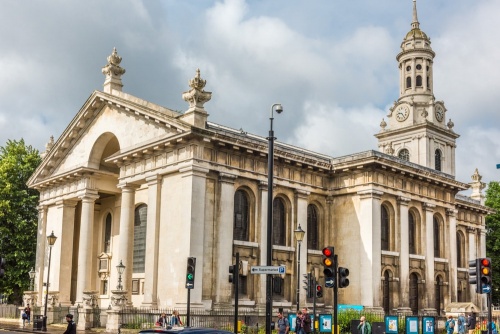 The church of St Alfege is a Greenwich landmark; its striking tower catching the eye over the rooftops of more modern buildings that jostle for space along Greenwich High Street. There has been a church here for over 1,000 years, since Alfege, Archbishop of Canterbury, was killed on this spot by Danish invaders in 1012.

Alfege was born in AD 954 to a wealthy family, but he turned his back on his family's wealth to enter the church at Deerhurst, Gloucestershire. He was named Bishop of Winchester in 984 after St Dunstan saw him in a dream. He earned a reputation for bravery, often going alone into Norse territory in an attempt to win them over to Christianity.

In 1006 he became Archbishop of Canterbury, but in 1011 Danish pirates laid siege to the city. Alfege was betrayed by one of his own monks, seized by the Norse, and held for ransom at Greenwich. Alfege refused to let his people pay the huge ransom demand, reportedly saying, 'The gold I give you is the Word of God'.

In anger the Norse killed him, striking him with ox bones and axe shafts. After his death a Danish oar dipped in Alfege's blood miraculously began to sprout. His body was taken to St Paul's Cathedral in London, then on to Canterbury Cathedral, where a memorial slab marks the burial place beside the high altar. Alfege was canonised in 1078. 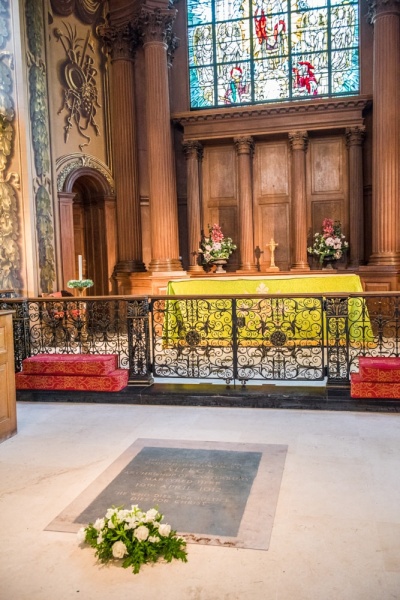 It seems certain that a shrine was erected on the site of Alfege's martyrdom within a very short time, and was placed under the Abbey of St Peter in Ghent, modern Belgium. The first Saxon church was rebuilt in the 13th century, and lasted until it was badly damaged in a great storm in 1710.

The abbey's British holdings were seized by the English crown in 1317, and since then, royal servants were often buried here. Among these were Tudor composer Thomas Tallis 'The Father of English Church Music', and Thomas Sheffield, Keeper of Gardens under James I.

In a display case built into the south-west corner of the nave is the 'Tallis Keyboard', an 18th-century console that came from the church organ when it was rebuilt in 1910. Some of the octaves of the middle keyboard are from the Tudor period and were therefore almost certainly played by Thomas Tallis and by the Princesses Mary and Elizabeth (the future Mary I and Elizabeth I respectively) whilst they were growing up at Greenwich Palace. The keyboard has several split keys to provide sharps and flats. 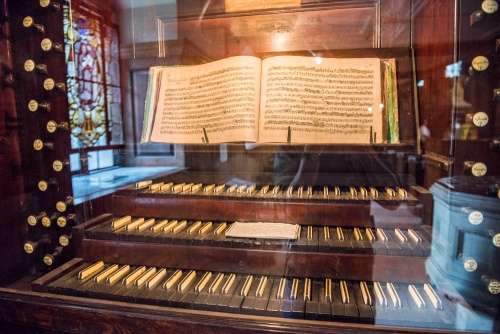 The Tallis Keyboard, played by Elizabeth I as a child

St Alfege's was rebuilt under the Fifty Churches Act of 1711, which provided money for 50 new churches in London and Westminster. The money was provided by a coal tax, which had been established to help rebuild London after the Great Fire of 1666.

The architect called in to build the new St Alfege was Nicholas Hawksmoor, a pupil of Sir Christopher Wren and Clerk of the Works at Greenwich Hospital. Hawksmoor was given a free hand in the design, and the result is a wonderful expression of English Baroque style.

He created a spacious interior with galleries on each side creating aisles, and a suspended ceiling that was - at that time - the largest unsupported ceiling in Europe. Other original highlights included woodwork detail on the pulpit, attributed to Grinling Gibbons, and wrought-iron railings by Jean Tijou, who was responsible for the gates at Hampton Court Palace.

It took just 2 years to build, and though it was complete by 1714, it was only consecrated in 1718 after a wrangle over whether the new church should include a 'seat of distinction' for the royal family. The royal pew was eventually installed in the west gallery.

Money ran out before Hawksmoor's design for a tower could be executed, so the old tower was simply re-shaped, to a design by John James of Greenwich.

The church was badly damaged by bombs on 19 March 1941. Restoration began after the war and was not complete until 1953. Gibbons' pulpit was destroyed, but much of the original interior has been restored as closely as possible to its original condition.

At the west end of the nave, just left of the west door as you enter, is a plaque commemorating Major-General James Wolfe, the victor of the Battle of Quebec. Wolfe died of wounds received in the battle. His body was returned to England and came ashore at Greenwich. He was buried in the church floor beneath the plaque.

In a display case under the plaque is a copy of the page for 1759 in the church register of burials where you can see the line '20. Major General James Wolfe'. 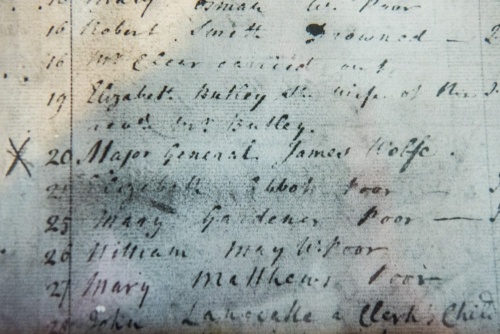 It is easy to overlook St Alfege's if you're trying to fit in all the attractions that Greenwich has to offer, but it is worth a visit to see this historic church. As of this writing the church is open daily, aided by volunteer assistance. See the official website for current details.

The nearest transport link is the DLR station at Cutty Sark, only a few minutes walk away. It is a very short walk from the church to other major attractions in Greenwich, including the National Maritime Museum and Old Royal Naval College. 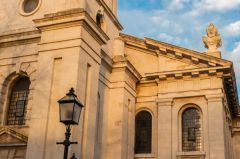 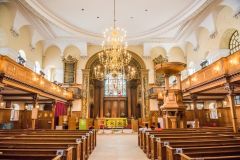