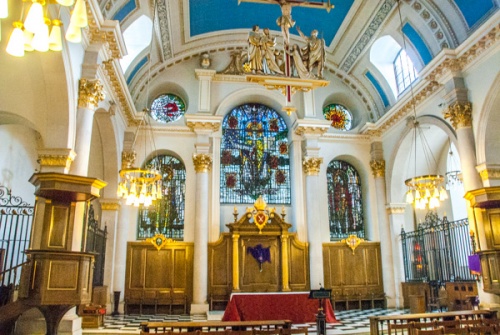 A true Cockney must be born within the sound of the bells of St Mary-le-Bow. The Norman crypt is the oldest parochial building in London still in use, but the rest of the church was built by Christopher Wren after the Great Fire.

Archaeological investigation has revealed that there was a church here in Saxon times. We have written records that a stone church stood here in the early Norman period, for it was destroyed in a freak tornado in 1091.

The church was rebuilt, with a pair of distinctive arches, or 'bows', which led to its popular name of St Mary de Arcubus. The arches gave their name to an ecclesiastical court known as the Court of Arches, under the auspices of the Diocese of Canterbury. The Court of Arches is still held in the church today.

During the Middle Ages, St Mary's was second only to St Paul's Cathedral in importance among London churches. For that reason, it was one of the first churches to be rebuilt by Sir Christopher Wren after the devastation of the Great Fire in 1666.

The church was complete by 1673, though it took another 7 years to add the distinctive neo-classical tower and steeple. The church was almost destroyed by bombs during the Blitz, and the famous bells were destroyed. They were recast in 1956 and rehung in 1961.

One of the most famous parishioners of St Mary's was Captain John Smith, founder of Virginia. His statue stands in the churchyard. Another parishioner of note was Admiral Arthur Phillip, the first Governor of Australia. A bust of Admiral Phillip stands beside the organ at the west end of the church.

The most famous tradition linked to St Mary-le-Bow is that only someone born within the sound of Bow bells can be considered a true Cockney. Some versions of the rhyme 'Oranges and Lemons' include a reference to the bells as well; 'I do not know, say the great bells of Bow'. According to another tradition, it was the sound of Bow Bells which persuaded Dick Whittington to return to London and make his fortune.

Another unusual tradition is that distances along the road from London to Lewes are calculated from St Mary's church. Mileposts along the route show the sign of a bow and four bells to mark the connection to St Mary's and her famous bells. The church holds regular services for the official livery companies of London and has ties to the cities financial institutions. 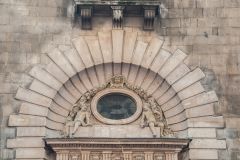 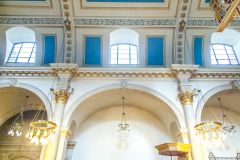 More self catering near St Mary-le-Bow >>