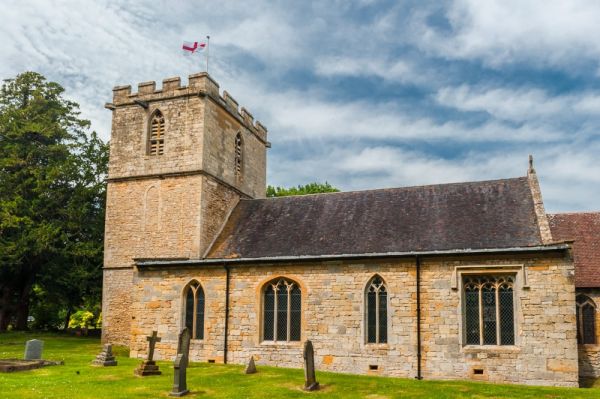 The picturesque Worcestershire village of Elmley Castle stands at the foot of Bredon Hill. The village name refers to an 11th-century fortress erected by the powerful Beauchamp family, of which little trace remains. Below the castle site, at the end of the broad main street, stands St Mary's Church, also a product of the 11th century.

Herringbone stonework on the chancel walls is a reminder of the church's Norman origins, as are several ancient carvings in the church porch, where you will find likenesses of a pig and a hare. 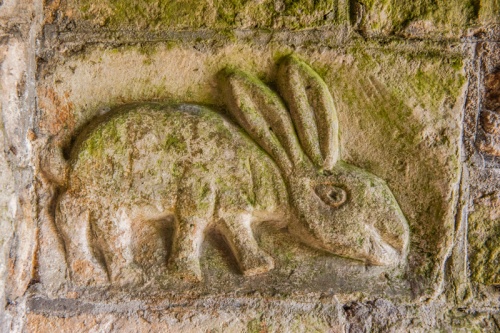 Norman carving of a hare

The transept was heightened in the Tudor period when it was transformed into a chapel for the Savage family.

The chancel was restored in the Victorian period, but much of the remaining building is original medieval construction. The four-bay nave is of 14th and 15th-century date, and set into the north aisle wall is a 14th-century doorway that was originally part of the nave wall. Look for a pair of gargoyles in the aisle wall. 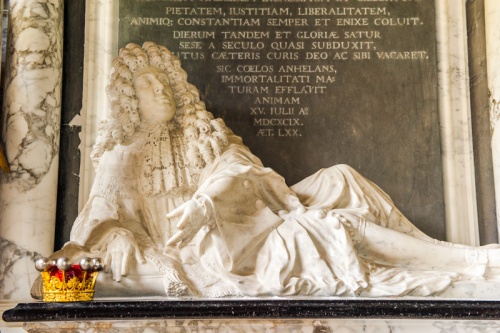 There are two wonderful monuments in the transept (the Savage Chapel). The first is an alabaster altar tomb commemorating three members of the Savage family; William, Giles (d. 1631) and Giles' wife Catherine. Poignantly, the effigy of Catherine Savage is shown holding a posthumous child. Figures of four surviving children kneel at the couple's feet.

The second monument is to the 1st Earl of Coventry (d. 1699) and shows the Earl reclining under a canopy. Both the effigy and the canopy are carved from white marble.

You might scratch your head over why the church at Elmley Castle holds a monument to the Earl of Coventry. The story behind its presence here is that of family conflict. When the Earl died, his son and heir, the second Earl, refused to allow his father's monument in the family church at Croome d'Abitot. 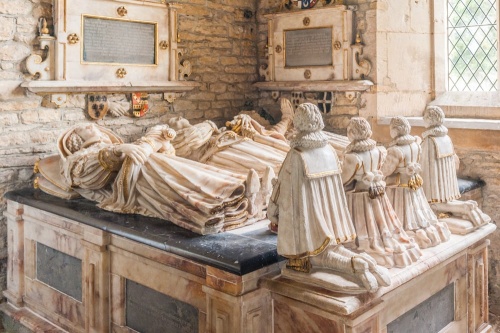 The Dowager Countess (the 1st Earl's wife), married Thomas Savage of Elmley Castle in 1700 and persuaded her second husband to let her erect the monument to her first husband in the family chapel here.

Also in the north transept is part of a 14th-century grave slab with a cusped cross on the face.

On the south chancel wall is a memorial to Anne, the daughter of Sir Richard Fetyplace (Fettiplace), who died in 1609. Opposite is another 17th-century memorial, to an unknown person with the initials E.G., who died in 1668.

There is yet another 17th-century memorial in the north aisle, this time to Elizabeth Harper (d. 1609), the wife of Thomas Harper, the vicar of Elmley Castle. 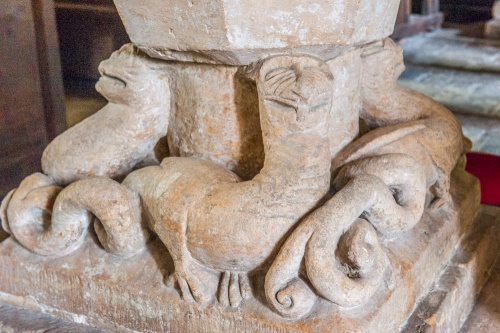 13th-century dragon carving on the font base

The oldest furnishing is the 13th-century font, which has a fascinating carved base with figures of four dragons. The octagonal font bowl is later, added around 1500.

Incorporated into the pews in the south aisle are four legs from a 1637 communion table. Many of the remaining pews date to the Tudor period.

One curiosity is a stone bowl in the transept, found in a farm at nearby Kersoe. 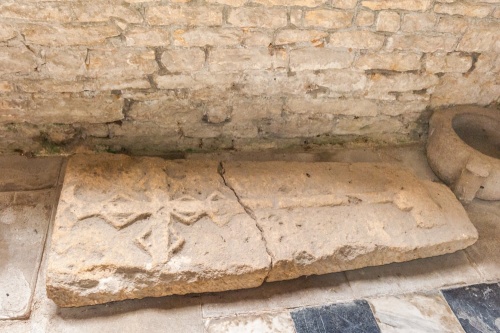 In the churchyard is an unusual sundial in the form of a square pillar. The south face of the pillar is carved with a dial, and above the dial is the Savage coat of arms; a shield of ten quarters. The same coat of arm,s appears on the alabaster altar tomb in the north transept.

St Mary's is a delightful country church, full of historical interest and set in one of Worcestershire's most picturesque and historic villages.

Elmley Castle is roughly 4 miles from Pershore and 5 miles from Evesham. From Evesham take the A46 south, and turn off at Hinton Cross on a minor road leading directly to Elmley Castle. The church is on Parkwood, at the southern end of Main Street. 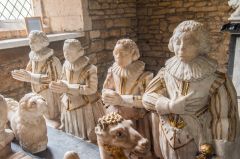 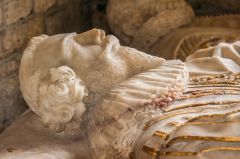 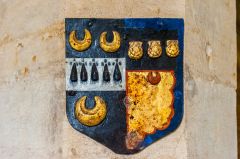 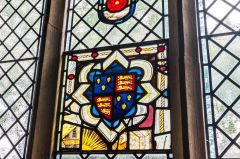 More self catering near Elmley Castle

Self Catering near Elmley Castle