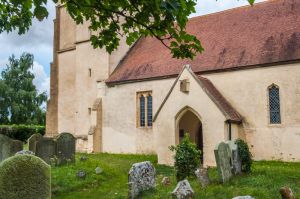 Serving two villages separated by the busy M5 motorway, Strensham's church stands on a rise with views of the Malvern Hills. The church is 13th century, with the addition of a 14th-century tower.

The exterior is simple, even plain. The church consists of a chancel, nave, north vestry, small south porch, and a west tower in four stages. In the churchyard is the Grade II listed base of a medieval cross.

The interior has plenty of historic interest, with the oldest feature being the Norman tub font. The pews are largely Elizabethan, and there are several Georgian features, including a beautifully carved and painted west gallery.

The gallery incorporates sections of a 15th-century rood screen divided into panels, each panel depicting a saint or church dignitary. These are quite wonderfully painted and carved, with 23 panels still intact, each bearing a traceried head. The chancel arch is 14th century. 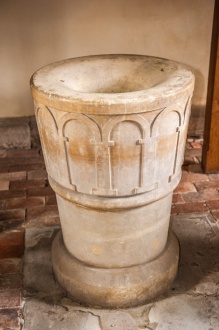 In the chancel are monuments to the Russell family dating back to the 14th century. The oldest of these is a memorial brass to Robert Russell, dated 1390. Immediately beside it is a brass to Sir John Russell (d. 1405) and his three wives.

These are just a few of the older highlights; there are numerous more modern Russell memorials from the 17th to the 19th centuries. There are also several sections of surviving medieval floor tiles incorporating coats of arms.

There seems to be some doubt over the dedication of the church. It is generally called St John the Baptist's, but is sometimes also known as St Phillip and St James. Whatever the case, the church is no longer in regular use and is in the care of the Churches Conservation Trust.

Be wary of using the official postcode for your satnav. We were coming from the east, via Pershore, and our satnav took us to Eckington Lock, on the River Avon. We could clearly see the tower of St John's' church on the far bank of the river, but there was no way to cross the river, even on foot.

We retraced our steps to the main Pershore road and took the minor road to Lower Strensham. Immediately before the motorway bridge Church Road strikes off to the east. The dead-end road terminates at the church, far from the actual village.

The door was locked when we arrived, but a sign in the porch directed us to the Old Rectory, beside the church, where a key hung conveniently on a nail set into a post outside the house. It was literally the work of 30 seconds to retrieve the key. 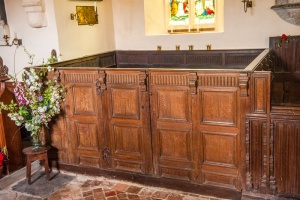 On entering the church the first thing that catches your eye is the remarkable west gallery. The vividly painted panels are quite stunning and the gallery is supported on intricately carved posts.

The very good church guide suggests that the painted panels may have been brought here from another church. I'm inclined to agree, for the gallery is much, much wider than the chancel arch, and would never fit the space properly.

The Norman font stands immediately beneath the gallery. It has quite obviously been recut, for the blind arcading is crisp and clean, unlike a normal Norman font that has seen 1000 years of use!

The chancel seems full to bursting with Russell tombs. The memorial brasses are exceptional, though the ones set into the floor have suffered from the passage of feet over the centuries. The really striking memorial is that of Sir Thomas Russell (d. 1632) and his wife Elizabeth (d. 1618).

The memorial is an exuberant, extravagant example of Jacobean Baroque style, with vivid paint and gilding, and decorated floral columns on either side of the couple's effigies. The memorial is bursting with colour, with complex figures of cherubs, reminders of mortality, globes, and coats of arms.

Strensham church is a delight; a wonderful country church full of historic features. The combination of the painted gallery and the Russell memorial make it a must-see. 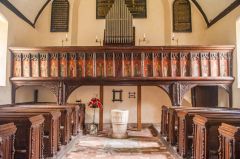 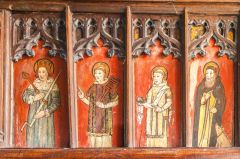 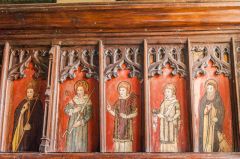 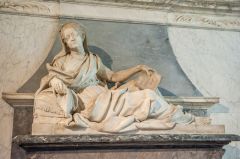