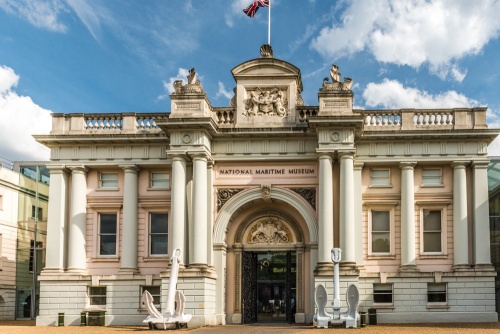 The largest maritime museum in the world contains some 2500 models of ships, plus paintings, navigational instruments, uniforms, and historical artefacts telling the long story of Britain at sea. Look for the collection of royal barges and the special exhibits on Admiral Nelson and Captain Cook.

The museum was established at Greenwich in 1934 taking advantage of a location with historic roots in the story of navigation. The Royal Observatory is just up the hill from the museum, and the Prime Meridian runs past the site. The museum took over buildings used by the Royal Hospital School, including the 17th-century Queen's House, designed by Inigo Jones. 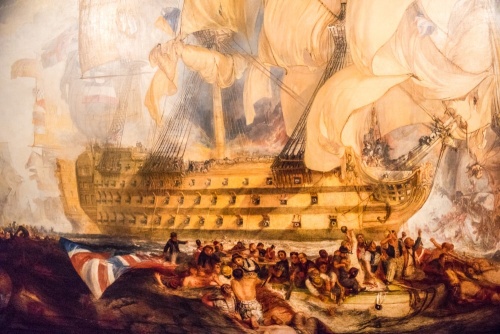 Perhaps the most important painting is not a portrait, however, but the remarkable 'The Battle of Trafalgar, 21 October 1805' by JMW Turner. This huge canvas, painted in 1824, is the largest work ever attempted by Turner, and hangs in its own gallery.

Turner devoted a huge amount of research to the painting, which combines several scenes from the pivotal naval battle that cost Admiral Nelson his life. Turner sketched the HMS Victory in person and borrowed a plan of the ship from the Admiralty to ensure accuracy. The result is astonishing.

The museum holds a huge number of items related to Admiral Nelson. See the special combination knife and fork created for Nelson after he lost his right arm. More poignant is the 'Trafalgar Coat', the uniform that Nelson was wearing when he was fatally wounded at Trafalgar.

You can see the fatal bullet hole made by a French marksman high on the left shoulder. You can also see bloodstains on the coattails and left sleeve. These bloodstains are thought to be from Nelson's private secretary, John Scott, who died earlier in the battle.

It is incredibly moving to see the uniform, with the bullet hole and the right sleeve pinned up, a reminder that Nelson had lost his right arm at the Battle of Santa Cruz de Tenerife in 1795.

Another museum exhibit is the saw used to amputate Nelson's arm after that battle (though there is some doubt as to whether the saw on display is actually the one used on Nelson that day). 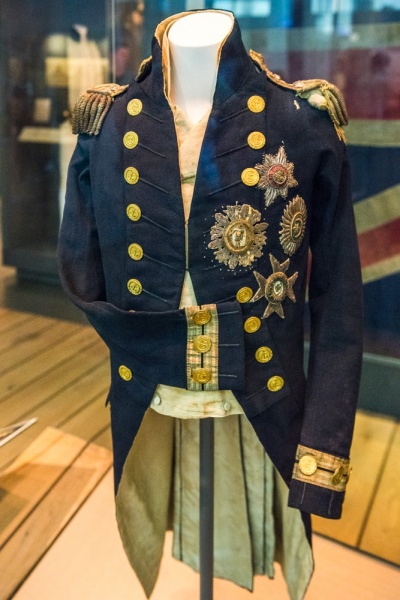 Another highlight is a remarkable gilded barge created for Prince Frederick, the heir to the throne, in 1731. The barge was designed by William Kent, better known for his architecture and landscape garden designs, and built by John Hall. The design was based on a traditional Thames wherry, with a flat centre section to accommodate a cabin. It took 21 oarsmen to power the barge, under the direction of a barge master.

The bow has a prominent overhang so that the boat's noble passengers could step ashore without getting their feet wet. Prince Frederick was a fashion leader, and the ornately gilded barge helped cement his social status. 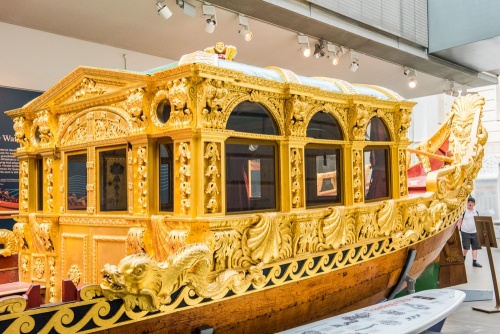 The museum holds the Caird Library, the largest maritime reference archive in the world, with over 100,000 books and pamphlets dating back to 1474. The documentary resources are remarkable, and provide an unrivalled record of the history of the Royal Navy and Merchant Navy.

In 2012 the museum joined with the Royal Observatory, Cutty Sark, and Queen's House to form an umbrella group known as Royal Museums Greenwich. Consolidating these popular heritage sites into one does make it easier for visitors, and, though only the Cutty Sark and Observatory charge admission, you can now get a joint ticket to save some money on a visit. And, really, there is so much to see in Greenwich that you really should just make a day of it and visit all the sites at once!

On a sunny day in summer Greenwich can be a very busy place indeed! But don't let that put you off; the area is big enough to take a lot of visitors. The easiest way to access the museum from central London is via the Docklands Light Railway (DLR) from Bank or Tower Gateway stations. Alight at the Cutty Sark DLR stop. Alternatively, you can take overland rail to Greenwich station, which adds another 5 minutes to the walk.

From Cutty Sark station it is a very easy, level walk of about 5 minutes to the museum. If you feel energetic you can climb Greenwich Hill above the museum for superb views over the River Thames and London. 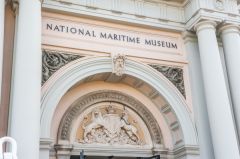 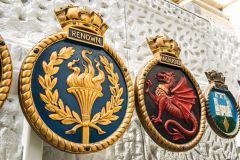 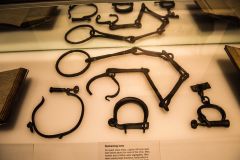 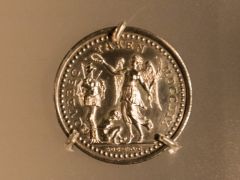