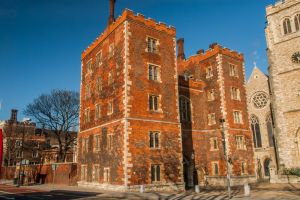 Lambeth Palace
The London residence of the Archbishops of Canterbury, Lambeth Palace dates to the 13th century. Around 1200 Archbishop Robert Walther established a house of Premonstratensian canons at Lambeth, on the south bank of the Thames. In addition to the monastic buildings, he built a private residence for himself. These early buildings are at the core of Lambeth Palace.

A chapel was added sometime before 1228. A vaulted crypt beneath the current chapel may belong to that 13th-century chapel. The chapel saw drama in 1378 when John Wycliffe, whose revolutionary ideas led to the Lollard heresy, was examined for heresy. The palace was later sacked by insurgents during the Peasant's Revolt of 1381.

In 1434 the imposing Water Tower was built. It was so named because unsubstantiated stories said that Lollards were imprisoned in the tower.

The most recognizable part of the Palace is the striking gatehouse, built between 1486 and 1501 by Archbishop Morton. It was here, before the Morton Gatehouse, that the so-called 'Lambeth Dole' was distributed thrice weekly to the poor of the parish.

In 1534 Sir Thomas More was questioned in the chapel after his refusal to sign Henry VIII's Oath of Supremacy. Later, in 1601, the Earl of Essex was held briefly at Lambeth Palace after the failure of his abortive revolt. 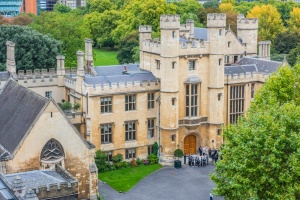 Lambeth Palace from the tower of
St Mary's (the Garden Museum)

In 1610 Archbishop Bancroft founded Lambeth Palace Library, probably the best single source of information on the history of the Church of England. The collection is freely accessible for research. Much of the Library collection is located in the historic Great Hall.

Lambeth Palace Garden is one of the oldest and most historic gardens in the London area. There are regular garden open days during the summer months.

Though Lambeth Palace does not have regular visiting hours, visitors can take a guided tour or arrange a small group tour by contacting the palace administration via the palace website.

More self catering near Lambeth Palace >>