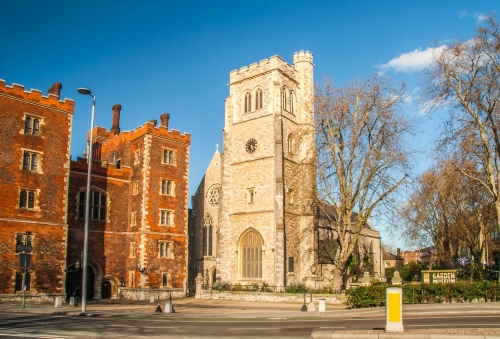 This fascinating museum is housed in a redundant 19th-century church, now restored. In the churchyard stand the tombs of the Tradescants, father and son, plant hunters and royal gardeners. Nearby is the tomb of Captain Bligh of 'Mutiny on the Bounty' fame. There is a permanent exhibit of gardening history and antique tools.

There has been a church at Lambeth since before the Norman Conquest, and we know that at the time of the Conquest it was owned by Countess Goda, sister of King Edward the Confessor. It was granted to the Bishop of Rochester by the Normans but from 1197 was owned by the Archbishop of Canterbury, whose London residence of Lambeth Palace stands directly beside the church.

Of the medieval church only the tower now remains. This was built around 1374. The rest of the medieval church was rebuilt in 1852 in Victorian Gothic style. One unusual feature of the Victorian church was an immersion font installed around 1900 under the tower. The font was commissioned by John Reeve, Rector of St Mary's, in memory of the Archbishop of Canterbury Edward Benson (1883-1896) who had appointed Reeve to his post. It is one of only two examples of an immersion font in an Anglican church anywhere in England.

Visitors can climb the 14th-century tower for a small fee. A spiral stair within the tower rises 131 steps to the tower roof, where you get fabulous views across the River Thames to the Palace of Westminster and look directly down onto Lambeth Palace. It's a wonderful experience and I can highly recommend paying the small fee to climb the tower. Due to the very narrow stairs, only small numbers of people are allowed up at any one time. When I visited I had to wait about 15 minutes before other visitors descended from the tower before I was able to climb up, but that just gave me time to look around the museum while I waited.

In 2017 builders working on a major restoration project St Mary-at-Lambeth Church made a remarkable discovery. When the builders lifted floor slabs they uncovered a long-lost tomb vault holding the coffins of several Archbishops of Canterbury dating to the 17th century. One of the coffins held the skeleton of Richard Bancroft, who led the production of the King James Bible in 1611.

Another three 18th century archbishops are probably buried in the vault, including Thomas Tenison, who served from 1695 to 1715, Matthew Hutton (1757 to 1758), and Frederick Cornwallis (1768 to 1783). Another Archbishop, Thomas Secker (1758-1768) had his internal organs buried in the churchyard. From the 1660s the church was chosen as an alternate burial place for Archbishops of Canterbury due to its proximity to the Archbishop's official London residence of Lambeth Palace. 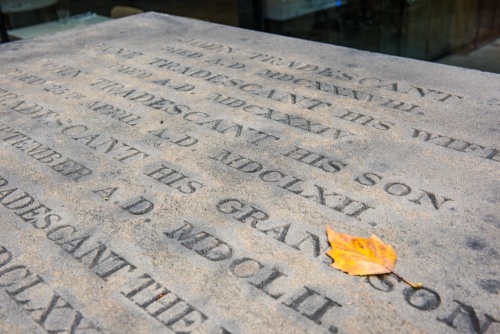 In 1977 the redundant church of St Mary's in Lambeth was scheduled for demolition. In the churchyard was the grave of William Bligh, captain of the Bounty, but more significantly for British culture, the tomb of John Tradescant (1570-1638).

Tradescant was an extraordinary man; probably the most influential gardener in British history, if not the world. He popularised plant hunting and was responsible for bringing seeds from across the world to Britain and introducing numerous exotic and unusual plants to the UK. His work was carried on by his son, John Tradescant the Younger (1608-1662), who is also buried here.

Both Tradescants worked as gardeners to King Charles I, and lived in Lambeth. From their British base, they travelled around the world, from the Mediterranean to Russia and the New World. They also wanted the British public to be able to see and enjoy their work, so they opened the doors of their botanic gardens in Lambeth to visitors and invited the public to view their 'cabinet of curiosities'; perhaps the first public museum in Britain.

Hester, the widow of John Tradescant the Younger, commissioned the ornate Tradescant tomb. On the top of the tomb is a verse attributed to John Aubrey which rather appropriately reads, 'Angels shall with their trumpets awaken men and change this Garden for a paradise'. The Tradescant tomb was one of the very first prominent memorials expressly designed to be outside a church and helped popularize the tradition of ornate and imposing British churchyard tombs.

St Mary's church was saved from demolition so that it could serve as the centrepiece for a museum on the history of gardening and the life of John Tradescant. Today Tradescant's ornate tomb stands in a lovely knot garden, planted with the very same species of plants that grew in his own London garden over 4 centuries ago.

The garden was created in 1980 to a design by The Dowager Marchioness of Salisbury, the museum President. The garden is created in a 17th-century spirit, using plants known to the Tradescants, including varieties introduced into Britain by them. Among the latter are the tulip tree, red maple, and scarlet runner beans.

One of the enjoyable features of having the gardening museum housed in a historic church is that many old memorials survive. Most of these are on the church wall, but a few are set into the floor. 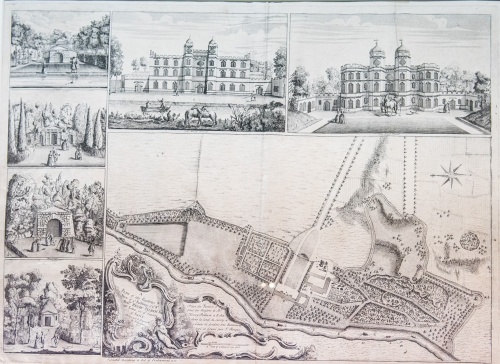 One of these is the ornately carved grave slab of Elias Ashmole, founder of the Ashmolean Museum in Oxford. Ashmole was a close friend of the Tradescants and part of the Tradescant 'cabinet of curiosities' was included in the collection that formed the core of the Oxford museum.

Beside Ashmole's grave slab is a lovely 18th-century statue of a Charity School Boy by John Flaxman (or, alternatively, by John Bacon). Statues of schoolboys and girls were a popular theme in the 18th century. This carving, made of Coade stone, once decorated the entrance to the Lawrence Charity School in Lambeth Green. It was later moved to Lambeth Parochial Boys school on Hercules Road and finally to Archbishop Temple's Boys' School on Lambeth Road.

One of the very best features of the Garden Museum is a series of exhibits on the influence of famous gardeners over time, from the Tradescants to the landscape garden style that dominated 18th century English gardening to the profound influence of writer William Robinson and Arts and Crafts garden designer Gertrude Jekyll. There are rather touching artefacts connected with influential gardeners, such as one of Humphry Repton's famous Red Books. The William Robinson display included a first edition of his massively popular 1889 book, 'The English Flower Garden'.

Not all the historical exhibits are associated with people we immediately think of as gardeners; one of my favourite displays showed a glass tube used as a 'cucumber straightener', designed by the famous railway inventor and entrepreneur George Stephenson.

More modern famous and influential gardeners are represented, too. Look for a knitted jumper worn by writer and broadcaster Allan Titchmarsh on the Ground Force TV series.

The museum also has numerous historical paintings of gardeners, including a wonderful portrait of 'John Wells, Gardener at Debdale Hall', painted around 1840 by an unknown artist. More modern is a rather good painting of Prince Charles, shown with flowers from his garden at Balmoral, painted by the Garden Museum artist in residence, Eilean Hogan.

In addition to the permanent exhibits on garden history, there is also a changing programme of temporary displays. When we visited there was a wonderful exhibit on the Tradescant's Orchard, with paintings by modern artists illustrating plants that were depicted in the Tradescant's own 17th-century manuscript on their orchard. An original copy of the manuscript was on display at the same time.

The Garden Museum is a delight to visit, and its location in such a historic location makes it even more interesting. I highly recommend a climb to the top of the medieval tower for views over the Thames and down onto Lambeth Palace. 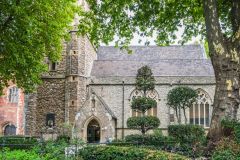 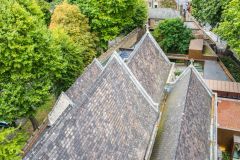 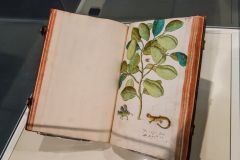 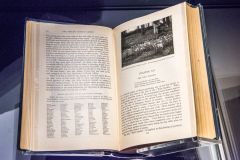 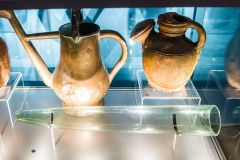 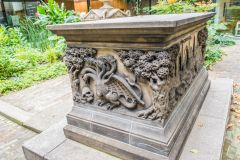 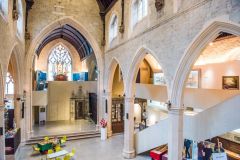 More self catering near Garden Museum >>