HERITAGE HIGHLIGHTS:   A reminder of the damage wrought by the Great Fire 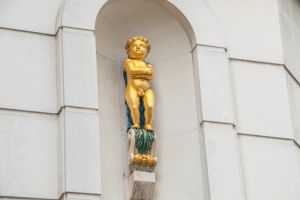 This gilded statue of a cherub, set into the side of a building, marks the furthest extent of the Great Fire of London in 1666. Aside from the historical significance of the Golden Boy, what really makes the statue fascinating are the inscriptions that are carved below it. Directly underneath the statue is a short inscription reading, "This Boy is in Memory Put up for the late Fire of London, Ocassion'd by the Sin of Gluttony, 1666."

A Fire Caused by Gluttony

The intriguing theory that the Great Fire was the result of gluttony was put forward by a contemporary preacher, who stated that if the fire had been heavenly retribution for lewdness it would have started at Drury Lane (the haunt of actresses and a byword for licentious behaviour), or if for blasphemy it would have begun at Billingsgate  (where the fishmongers were known for their colourful language), or if untruthfulness was the sin, then everything from Westminster Hall to the City would have been levelled!

But, he concluded, the fire began at Pudding Lane and ended at Pye Corner. So, the, er, logical conclusion to be drawn was that the fire was a sign of God's displeasure for gluttony.

if I'm not aware of any other fire attributed to gluttony! But there's more; here is the inscription at the base of the building:

The boy at Pye Corner was erected to commemorate the staying of the Great Fire, which beginning at Pudding Lane was ascribed to the sin of gluttony when not attributed to the Papists as on the Monument and the boy was made prodigously fat to enforce the moral. He was originally built into the front of a public house called the Fortune of War, which used to occupy this site, and was pulled down in 1910.

The Fortune of War was the chief house of call north of the river for resurrectionists in body snatching days. The landlord used to show the room where on benches round the walls the bodies were placed labelled with the snatcher's names waiting till the surgeons at Saint Bartholomews could run round and apraise them.

More self catering near Golden Boy of Pye Corner >>

More bed and breakfasts near Golden Boy of Pye Corner >>