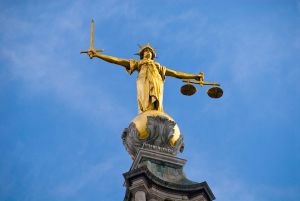 The Central Criminal Court of London, more commonly known as the Old Bailey, is a criminal court dealing with high profile cases in Greater London (and occasionally from other parts of the realm).

The site now occupied by the Old Bailey was the location of Newgate Prison, the most infamous prison in London during the medieval period.

The first Old Bailey was a sessions house (a place for holding regular court proceedings) erected beside Newgate Prison in 1539. This building was replaced by a larger building in 1774. The Old Bailey Sessions House acquired its rather odd name from the street on which it stands.

The sessions were replaced by the Central Criminal Court in 1834 when the legal system was overhauled. The current Sessions House was erected on the foundations of Newgate Prison and opened in 1907. It was designed by EW Mountford. It originally had space for four courtrooms, though this has now been expanded to 19, and there are a number of holding cells for prisoners.

The Old Bailey is topped by a famous statue of Justice, a powerfully-built woman holding balance scales in one hand and an upright sword in the other. Unusually, this version of Justice is not blindfolded. This gilt statue was designed by FW Pomeroy and erected in 1907.

Judges at the Old Bailey sometimes bear posies of flowers. This custom originated when Newgate Prison still stood, and the area would have been incredibly smelly and unpleasant.

Among the most famous trials held at the Old Bailey are those of Oscar Wilde (1895) and Dr Crippen (1910). More important perhaps, from a historical perspective, was the 1670 trial of Penn and Mead, which helped establish the legal principle of independent jurors.

The general public can watch trials in session from public galleries.