HERITAGE HIGHLIGHTS:   A church established by Lanfranc, already described as ancient in the 12th century! 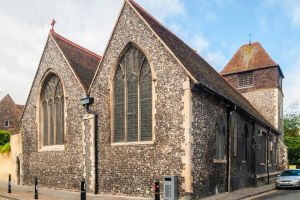 Canterbury, St Alphege church
St Alphege's was built around 1070 by Archbishop Lanfranc. It was rebuilt in the 12th century, and again in the 13th and 15th centuries. Among the interesting features is a late 15th-century pillar, funded by a bequest from Thomas Prude. A brass coat of arms has been set into the pillar, with the inscription, 'Gaude Prude Thoma per quem fit ista columna.', which very loosely translates as 'Thomas Prude paid for this column'.

Thomas Cushman was married at St Alphege's. Cushman was responsible for hiring the Mayflower, the ship which took the Pilgrims to America in 1620. Cushman himself followed in 1621, but eventually returned to Britain, and died in Canterbury in 1625.

St Alphege ceased being used as a church in 1982, and for some time served as the home of the Canterbury Environmental Centre. It is now used by King's School, and the interior is not generally open to the public.

Within the church is buried John Caxton, brother of printing pioneer William Caxton of Tenterden. The font is hexagonal and dates from the 15th century.

St Alphege was an 11th-century Archbishop of Canterbury. When Danes under Earl Thorkell invaded in 1011 they took Alphege captive. The witan (council) agreed to pay the Danes £84,000, a huge sum in those days, to leave. The Danes wanted an extra £3000 to free Alphege, but the Archbishop urged his countrymen to refuse the ransom. The Danes killed Alphege in a rage by throwing beef bones at him. He was eventually buried in Canterbury Cathedral, near the high altar.