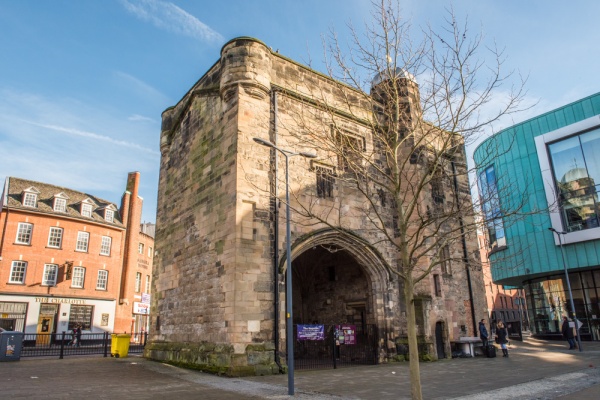 The Magazine Gateway is an early 15th-century gatehouse built by Henry, 3rd Earl of Leicester to guard the main entrance into The Newarke ('new works'), a religious precinct bordering Leicester Castle. Within The Newarke stood the Church of St Mary of the Annunciation, Trinity Hospital, and several residences for priests.

The gateway was constructed between 1400-1410. It was probably meant more to impress than to provide a strong defence to attack, for the wide arched entrance had no portcullis.

The gateway stands three floors high and is made of Dane Hill sandstone. Chambers on the ground floor were used to house a porter, his family and servants. A huge centre post supports the ceiling, and you can see slots in the timber post that helped support a plastered timber screen that divided the chamber in two. On The Newarke side of the gatehouse is an external stair turret.

There are more chambers on the first floor, possibly also used by the porter. In the wall is a stone cupboard, or aumbry. 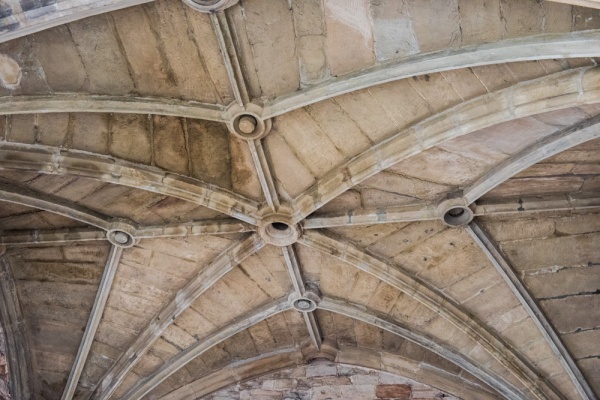 15th-century vaulting under the archway

On the second floor are two opulent rooms for high-status guests visiting Newarke College. All but one of the windows is original. Set into one wall is a fireplace and beside it a piscina for washing hands, with a drain hole that emptied through the mouth of an external gargoyle. On one side is a garderobe, or toilet, with a chute joining to a similar garderobe on the first floor. The chute continues to ground level.

The second-floor chambers were probably used to house high-status prisoners during the Elizabethan period. You can see graffiti left by these prisoners on the walls. Later graffiti was carved by prisoners in the Napoleonic Wars. One carving shows an officer of that period, with a frilled shirt and pigtail. One side passage giving access to the walls has a delicately cared niche that probably held a statue of the Virgin Mary.

Edward VI closed St Mary's church in 1548, and The Newark precinct became a fashionable residential area for the leading citizens of Leicester. The gateway may have been used as a prison during the Tudor period.

The gateway was originally called simply Newarke Gate. In 1642, at the height of the Civil War, the county militia's weapons and gunpowder were moved here from the Guildhall. It was this use as an armoury, or magazine, that led to its more popular name of The Magazine. 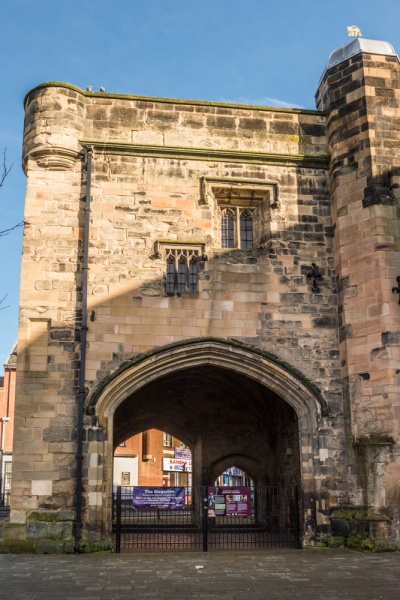 Control of the old medieval gateway became an important issue during the Civil War, with the Royalist Hastings family vying with the Parliamentarian Grey family for control of the building. King Charles I visited Leicester in July 1642 and as a result, the armoury contents were dispersed throughout the county. However, several prominent families in The Newarke supported Parliament, and after the king had gone a lot of the weapons and gunpowder returned to storage in The Magazine.

The Newarke area was targeted by King Charles during the bloody Royalist siege of Leicester in 1645 and the area was badly damaged during the conflict. Just a few weeks later the king was defeated at the Battle of Naseby and Parliament marched on Leicester. One more The Magazine was garrisoned, this time by Royalists. Parliament attacked the gatehouse and the defenders surrendered. Somehow, despite these two assaults within a few weeks, The Magazine escaped serious damage.

One curious discover may date to the Civil War siege; in the 1960s workmen restoring the medieval gateway discovered a pair of human skulls wedged in a garderobe chute. There is no indication of when the skulls were placed there or under what circumstances. 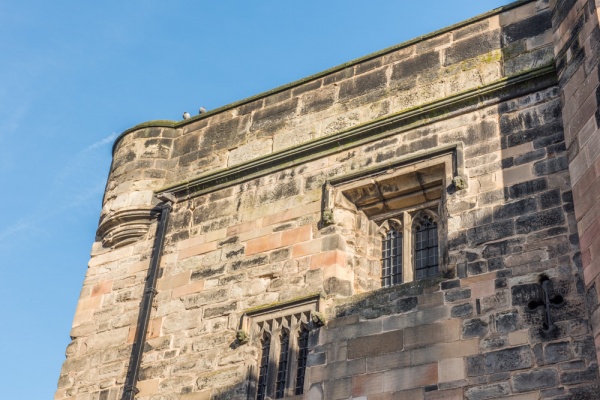 15th-century windows over the archway

The county militia continued to use The Magazine continued as an armoury after the end of the Civil War. The stonework was restored in 1853 and in 1863 a complex of military houses was built on one side. In 1893 this was followed by a drill hall to the north, creating an enclosed area known as Magazine Square, with a parade ground in the middle.

The gateway was used as a recruiting centre in WWI. It was from The Magazine that newly enlisted en marched to the railway station on a journey that would eventually take them to the trenches of the Western Front.

In 1969 the Royal Leicestershire Regiment opened its regimental museum in The Magazine. The museum closed in 1996 and later re-opened in the Newarke Houses Museum, just a stone's throw away.

The 19th-century military buildings were pulled down in the 1960s to make way for new road construction. The original plans called for The Magazine to be demolished as well, but these plans were altered due to public protest.

The Magazine interior is usually closed except for special event days or for pre-booked group tours. The exterior, however, can easily be viewed at any time. The best place to view it is from the pedestrianised plaza in The Newarke, where the nearby roads won't interfere.

Nearest Accommodation to The Magazine:

More self catering near The Magazine

More Hotels near The Magazine

More bed and breakfasts near The Magazine