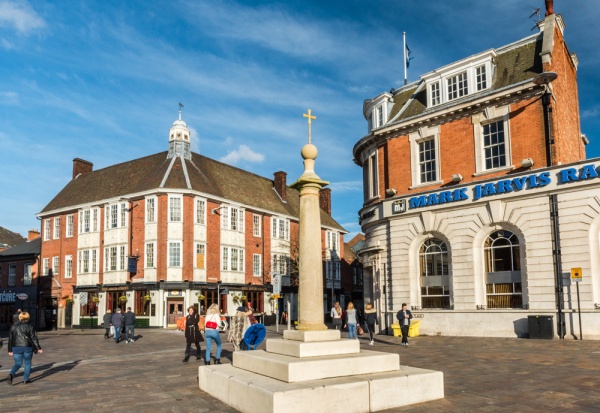 In one corner of Jubilee Square stands one of the most intriguing historic monuments in Leicester; a stone column topped with a ball and cross. The column is all that remains of High Cross, a monument with a history of being moved, and moved again, and again, and again ....

In the medieval period, the High Street was the most important thoroughfare in Leicester. The High Street stretched from North Gate to South Gate. The street was paved, unlike other roads, so it was quite literally the 'high' street. Meeting High Street was Highcross Street, and the junction of the two roads became known as High Cross. We know that there was a stone cross at the meeting of the roads as early as the 13th century.

This meeting place of the roads evolved to become the site where people from outlying areas would bring their produce to sell at a weekly Wednesday market. By the late 14th century a second market was added on Fridays.

High Cross became a popular place for fights between supporters of the houses of York and Lancaster during the Wars of the Roses, and in 1488 the mayor was forced to pass a decree that anyone drawing blood at High Cross was subject to a fine of 3s 4d. 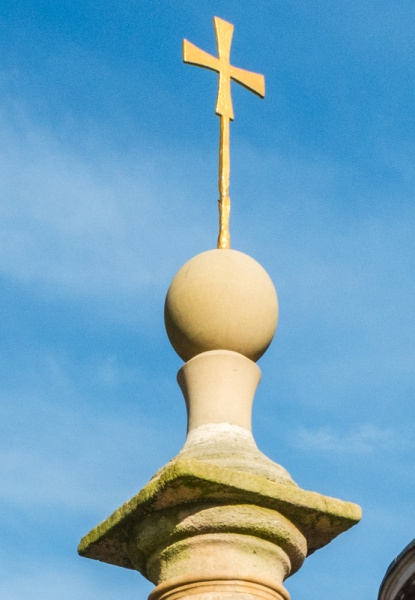 The gilded cross and ball atop the column

In 1577 a High Cross was erected to provide shelter for the market stalls. The High Cross was a peculiar octagonal building with 8 pillars supporting a central dome. It cost 100 pounds to build, a sizeable amount for the time.

The eight-sided High Cross was the site of one of the less savoury moments in Leicester's history when after the successful Royalist siege of the city in 1645 Royalist soldiers stripped and maimed their prisoners in front of the cross. King Charles, seeing the incident, approved, reportedly saying, "I do not care if they cut them more, for they are mine enemies."

By 1773 the Elizabethan High Cross was in poor condition, and it was pulled down to make way for carriages to navigate the busy intersection. A granite cross was later set into the pavement to show where the market cross had stood.

A single pillar was saved from the destruction and began a wandering life that would last several centuries. 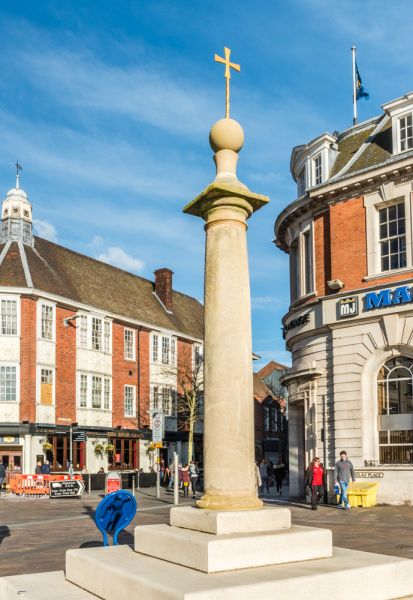 Another look at the High Cross column

The pillar was set up in front of the Crescent in King Street, and there it stayed for almost 100 years. Architect Arthur Wakerley bought the land it stood on just so he could move it to the garden of a house he was building for his daughter at Crown Hills. From there it was moved to the gardens at Newarke Houses.

In 1977 the Leicester Rotary Club celebrated its 60th anniversary by moving the High Cross pillar from Newarke Houses to the Cheapside market place. Then in 2014 it was moved once again - hopefully for the final time - to its present home in Jubilee Square, not far from its original High Street home in the centre of medieval Leicester.

So in essence the High Cross that we see today is an Elizabethan column, a reminder of Leicester's early medieval market cross.