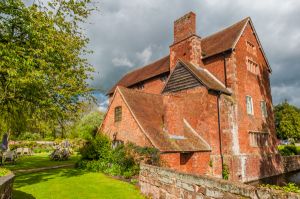 Harvington is a picturesque moated medieval manor house dating to the late 14th century. The manor was rebuilt in the Elizabethan period and again in the 18th century. It is famous for its large number of secret priest holes.

The interior features numerous Elizabethan wall paintings, some hidden under whitewash for centuries. Beside the manor is a malthouse and remains of medieval fishponds. Unlike most historic houses open to the public, Harvington is not privately owned, but rather it is owned by the Roman Catholic Archdiocese of Birmingham.

Within the house are secret hiding places used by priests during late 16th and early 17th centuries. Indeed, Harvington probably has more secret priests holes than any other house in England. They were built at a time when it was an act of high treason to shelter a Catholic priest. If a priest was found he could expect to be executed, and the same fate was likely for anyone found sheltering him. 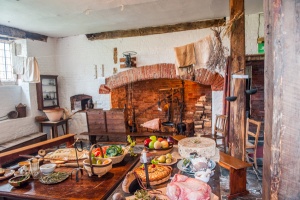 Harvington Hall was built around 1580 by Humphrey Pakington, who remodelled an earlier medieval house. It was presumably Pakington who built the priest holes into the house, probably using the services of Nicholas Owen, a master builder working for Father Henry Garnett, the Jesuit superior in England.

Both Owen and Garnett were eventually captured at nearby Hindlip House, owned by Humphrey Pakington's friend Thomas Habington.

During the Civil War, the manor was sacked by Parliamentary troops, and in 1696 it passed to the Throckmorton family of Coughton Court. It remained in the hands of the Throckmortons until 1923, when it was purchased for the diocese, who restored the house and opened it to the public.

In 1936 a series of marvellous wall paintings were discovered hidden under layers of plaster inside the Hall. The best of these drawings can be found in the Mermaid Passage, the Chapel, and the back stairs. There are a further series of wall paintings in the Nine Worthies Passage on the second floor, depicting Biblical scenes such as David slaying Goliath. 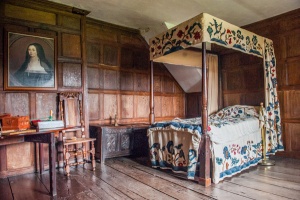 The Malt House and Georgian Chapel

The historic malt house has been transformed into a visitor centre, with an exhibition telling the story of Harvington. In addition, visitors can learn about the process of malting and see the old kiln and drying floor.

Near the Malt House is a Georgian Chapel, built in 1743 to replace the chapels inside the house. This lovely little chapel was used until 1823 when it was damaged by fire and replaced by the larger church outside the Hall. It served for a time as the village school until it was restored and furnished with 18th-century railings, altar, and organ. It is now in use for regular worship once again.

The most interesting historical feature inside the chapel is a very large wooden carving of Christ on the cross, dating to the 16th century and carved in the Low Countries. 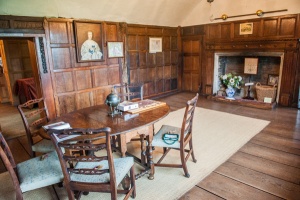 Harvington Hall deserves much more attention than it gets. It is a fascinating historic house that seems to have grown organically and sprouted odd corridors and cubbyholes. It is a maze of creaking floorboards and passages, and, of course, secret hiding places for priests.

Most people will be drawn to Harvington by the mystery of the priest holes, but there is much more to see, including the wonderful wall paintings in the Mermaid Passage and the staircase. For me, the most intriguing paintings were the figures of the Nine Worthies on the Second Floor. They almost seem like they could come to life at any moment.

Of the priest holes, the most fascinating is the remarkable hole accessed by lifting two stairs on the grand staircase. It is no wonder the hole was never found; the stairs are very heavy and the hole would have been very difficult to detect. Another very clever hiding place is accessed by pivoting an apparently solid beam in the wall of Dr Dodd's Library. With the beam lifted out of the way there is just room for a slender man to slip into the narrow hole beyond.

The library was named for Charles Dodd, who served as chaplain at Harvington from 1722-1743. It was here that he wrote his voluminous work, The Church History of England. Three original volumes from Dodd's book are in a glass display case in the library where he worked.

Another highlight was Lady Yate's Room, used by Mary Yate, daughter of the Hall's builder, who inherited Harvington after he father's death in 1631. After her own husband, Sir John Yate, died in 1659, Lady Mary used Harvington as her dower house. Her bedroom has wonderful wooden panelling and a beautifully carved four-poster bed.

Harvington Hall is a delight to visit, a wonderful example of a moated Elizabethan house, full of historic interest. The rooms have extremely good information signs throughout, and a very useful free audio-guide is available for visitors. 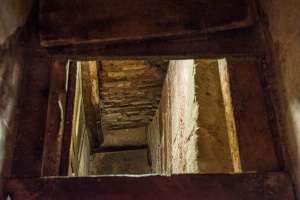 A secret priest hole
off the Withdrawing Room 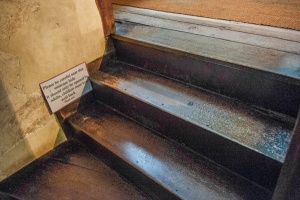 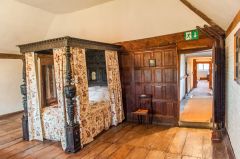 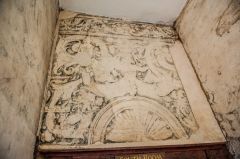 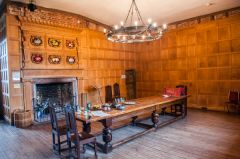 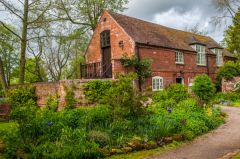 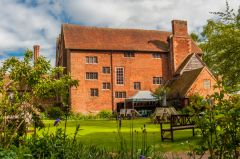 More self catering near Harvington Hall >> 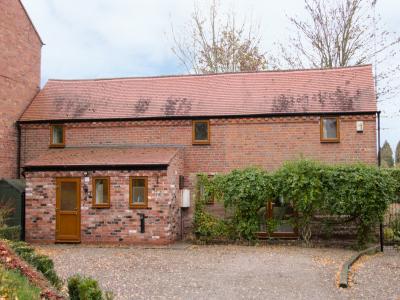 This former worker's cottage rests in the owner's grounds in the town of Kidderminster and can sleep four people in two bedrooms.
Sleeps 4

This is an attached barn conversion resting on the outskirts of Kidderminster in Worcestershire, it can sleep five people in three bedrooms.
Sleeps 5