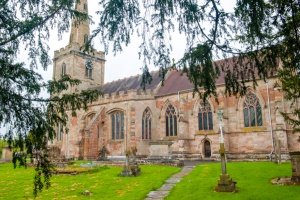 This lovely historic church is the only church in England dedicated to St Cassian. What is more, we're not actually sure which Cassian it is dedicated to. There are two saints with this unusual name; one a 5th century native of Romania who served as an abbot, and the second is an Italian schoolmaster in ancient Rome who was put to death by Emperor Julian.

There was probably a church at Chaddesley Corbett in the Saxon period - though not necessarily in the same location - as the Domesday Book of 1086 mentions a pair of priests.

Much of the current building is 12th century - probably erected around 1150. The arcade columns in the nave date to that time, though the ones on the south side were later moved when the church was extended later in the 12th century.

Also from the middle of the 12th century is the remarkable font, carved in Celtic style by the Herefordshire School of carvers who were responsible for so much decorative carving between the Midlands and the Welsh Marches.

The font has intricate Celtic interlace patterns around the two-tiered base, and the bowl is decorated with fantastically animated carved dragons, their tails interlaced to form a continuous frieze. The detail is perhaps not quite as ornate as similar fonts at Castle Frome and Shobdon in Herefordshire, but it is still a wonderful example of 12th-century craftsmanship. 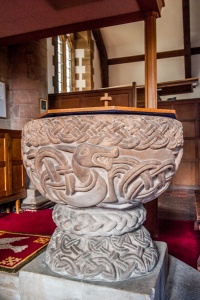 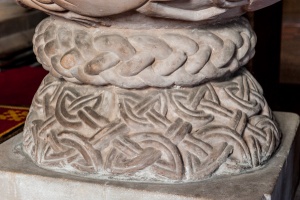 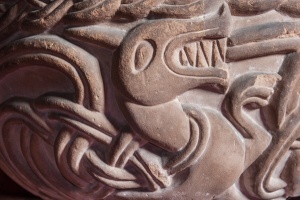 Carved dragon on the font bowl

The north-east corner of the church is occupied by the 13th-century chapel of St Nicholas, probably built by William Corbett, Lord of the Manor, who died in 1282. Within the chapel are monuments to the Corbett family and the Pakingtons, who purchased Harvington Hall and became lords of the manor in 1529.

Between the chapel and the chancel is the recumbent effigy of a priest, probably Roger Corbett, rector of the parish from 1306-1317. The effigy is quite worn, in stark contrast to another effigy in the south aisle, a figure of a knight clad in chain mail, his feet resting on a dog, his hand on the hilt of his sword. The figure is unidentified, but is probably another Corbett family member. The detail of the armour and chain mail is terrific and extremely detailed. You can see each small link of mail. 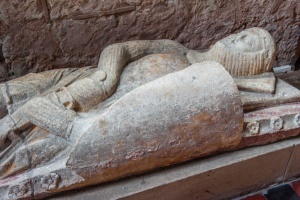 The chancel is 14th century and was probably built by a later Sir William Corbett, the last of the Corbett family who gave their name to the village. The chancel is exquisitely decorated with some of the finest 14th-century carvings of any church in the Midlands. The sedilia is particularly beautiful, with wonderfully detailed small heads decorating the arches over the sedilia seats.

There is also a richly carved piscina, aumbry cupboard, and niches on either side of the altar. Look at the base of the niches and you'll find a pair of faces peering out from a cascade of lush foliage, in the style of a traditional Green Man carving. Above the altar is the 14th century east window. The glass is 19th century, a gift from the Perrin family, co-founders of the famous Lea & Perrins Worcestershire sauce company of Worcester.

On the south wall of the chancel is a memorial brass to Thomas Forest (d. 1511), his wife and their numerous offspring. Forest served as the Keeper of Dunclent Park, near Kidderminster.

Immediately to the left of the west entrance door is a small display case housing an 'Erasmus Bible', a commentary on the New Testament translated in 1516 from the original Greek by the Tudor scholar Erasmus.

One final feature of historic interest is a small fragment of a Norman tympanum, set on the west wall of the porch. The fragment is beautifully carved and is thought to be part of a Christ in majesty carving which would have originally been set over the south doorway. 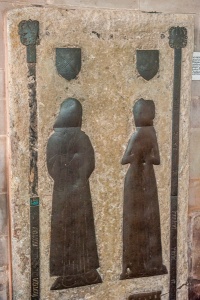 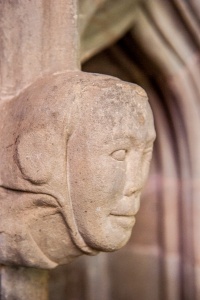 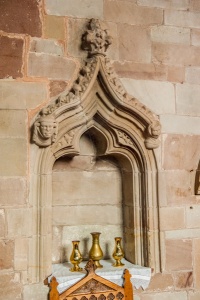 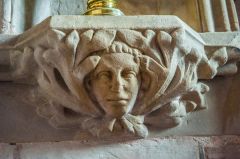 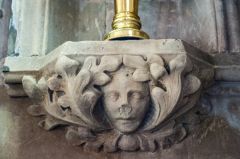 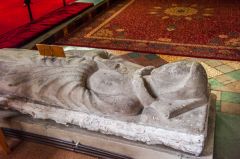 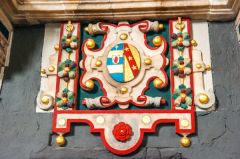 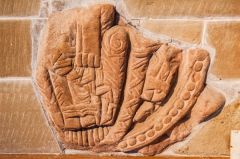 About Chaddesley Corbett
Address: The Village, Chaddesley Corbett, Worcestershire, England, DY10 4SD
Attraction Type: Historic Church
Location: Just off the A448, easily visible from the road. Lots of parking along the street. The church was open when we visited.
Website: Chaddesley Corbett
Location map
OS: SO891736
Photo Credit: David Ross and Britain Express

More self catering near Chaddesley Corbett