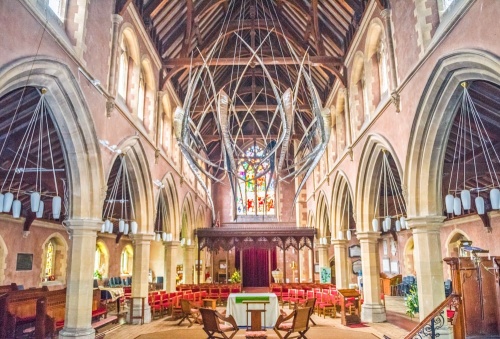 The imposing parish church of St Peter and St Paul was built in 1879 to replace an earlier medieval church that had fallen into decay and was in any case, too small for the town's increasing population.

Land for the church was given by GE Martin, who owned a house on the site. That house was later to become the rectory.

Plans for the new church were drawn up by the distinguished Victorian architect, Sir Arthur Blomfield. The building estimate was Â£12,000, but sadly the combined efforts of the parishioners and the Anglican Church only raised Â£11,000. as a result, temporary chairs were used. 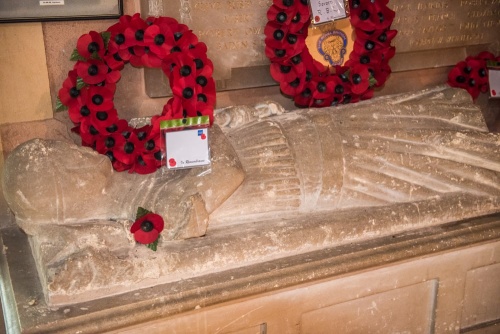 The church is built of Stanway stone, a golden-coloured limestone that gives the church a warm tone. One of the church's most striking features is the slender broach spire, which makes the church visible from a great distance.

The church opened for worship on 3 September 1879. Its first rector was Robert Lawson, who gave the font, which is 18th-century work, and brought from the old church.

Thankfully, some furnishings from the medieval church were saved, including the bells, the 18th-century organ, and several interesting memorials.

The most obvious modern furnishing is a striking corona hovering over the nave. This was designed by Anthony Robinson. 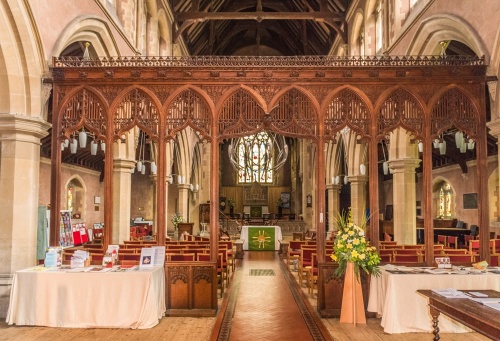 The striking screen was brought here from St Mary Magdelen in Worcester when that church closed in 1980. On the south chancel wall is a beautifully carved triple sedilia. The chancel roof was painted by Heaton, Butler, and Bayne in 1884.

Heaton, Butler and Bayne were primarily stained-glass makers, who had their start working with the famous London firm of Clayton & Bell. With studios in Covent Garden, the firm became extremely popular among Gothic Revival architects and had one of their window designs installed in Westminster Abbey.

The most interesting medieval feature is a worn effigy of a crusader knight believed to be William Boteler, whose family built the original church near the river. 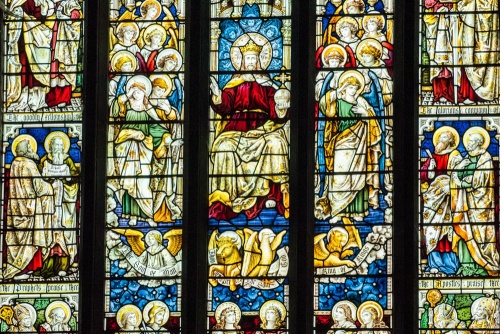 In the north aisle is a marble wall tablet to Mary Bramley (d. 1737). In the chancel is a simple plaque to the memory of Sarah Barnes (d. 1809), who was 'the mother of thirteen children and so exemplary in the discharge of every duty, that (whilst a single vestige of that family survives) her memory must be honoured and her loss deplor'd.' The plaque also commemorates her husband Robert, rector of Upton-upon-Severn for 52 years.

On a pillar near the west end of the church is a mark that shows the height reached by flood waters in 1947.

Don't mistake the present church for the iconic tower of the Old Church (aka The Pepperpot), on Church Street, which dominates the approach to the town. The tower is all that remains of the medieval church. Most of the tower dates to the 18th century, but the base incorporates medieval stonework. The body of the church was badly damaged when it was occupied by Royalist troops during the Civil War Battle of Upton in 1651. 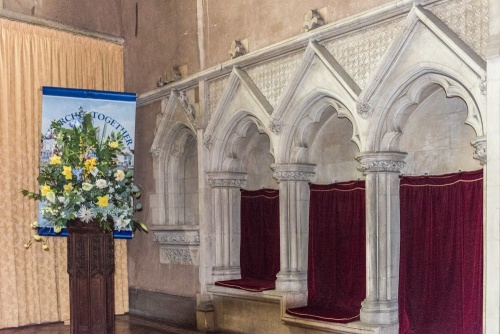 The triple sedilia and piscina

St Peter & St Paul's Church is on the east side of Old Street (the A4104), opposite the drive to the Upton Rugby Club. The church was open when we visited. 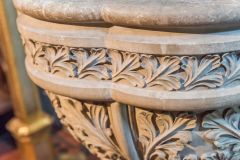 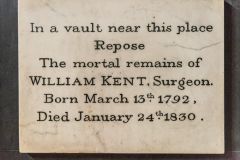 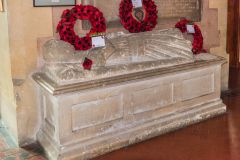 Self Catering near Upton-upon-Severn