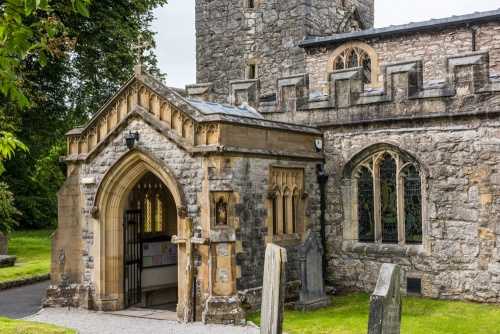 St Michael and All Angels Church has graced the Cumbria village of Beetham since the Saxon period. Saxon stonework is incorporated into the base of the tower. The church once served the far-flung parish of Arnside. Worshippers from Arnside village had to navigate the narrow limestone passage known as the Fairy Steps to make their way to services.

That early church was dedicated to St Lioba (sometimes spelled as Leoba). St Lioba was an 8th-century Benedictine nun, born to a noble Wessex family around AD 710. She entered the double monastery at Wimborne Minster and late accompanied St Boniface on his missionary efforts in Germany, where she died. There is a roadside shrine to Lioba in the neighbouring hamlet of Slack Head.

The dedication was changed to St Michael & All Angels after the Norman Conquest. The nave and chancel reflect this Norman influence; both date to the 11th and 12th centuries. 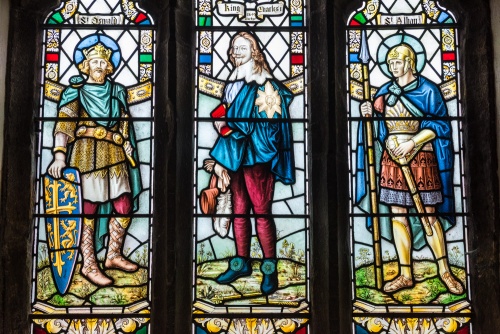 The chancel was enlarged in the 13th century and the Beetham Chapel added in the following century. The aisles were widened in the late medieval period and the top stage of the west tower built in the Elizabethan era.

Between the chapel and choir is the tomb of Sir Robert Middleton and his wife Anne (c 1490). The Middletons lived at Leighton Hall, a few miles to the south of the village. Anne Middleton was the daughter of Roger Beetham, the lord of the manor. The tomb is heavily damaged, the result of vandalism by Parliamentary soldiers in the Civil War. You can see deep grooves in the sides of the tomb made by soldiers sharpening their blades.

Other memorials include an oval tablet to Lucy Hutton, the second wife of Rev William Hutton, who died in 1788. Another small circular plaque commemorates Daniel Wilson (d 1754). 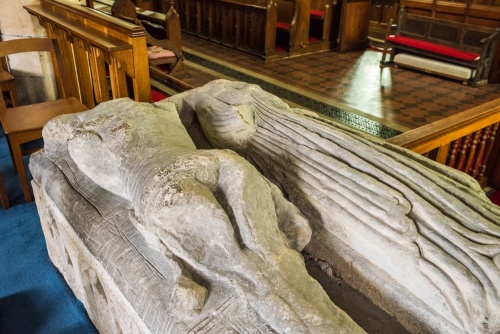 A much larger and grander memorial remembers several generations of the Johnson family of Beetham. It commemorates Thomas, the infant son of John Johnson the younger, who died in 1720 at 1 year of age. Thomas's sister Jane followed seven years later in 1727 at just five years old. It is a poignant reminder of how many children died young in the days before reliable medical care.

Thee are several interesting panels of medieval glass. In the Beetham Chapel is a panel created around 1500 depicting the arms of Thomas Stanley, the 1st Earl of Derby. Stanley earned his earldom by betraying Richard II on the Bosworth battlefield and fighting on behalf of Henry Bolingbroke.

When Richard was slain, Bolingbroke knighted Stanley on the battlefield and took the crown as Henry VII. In the same window is a representation of Bolingbroke's arms before he became king. Also in the window is a medieval fragment depicting a knight with a halo. 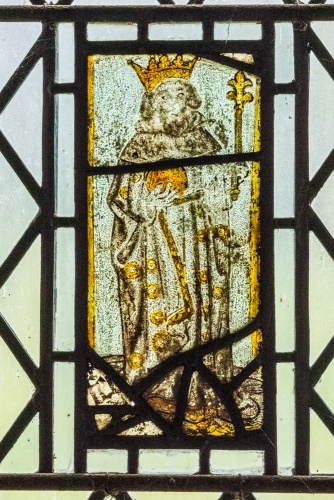 The west window in the tower is also medieval. Sadly, the rest of the medieval glass was destroyed during the Civil War.

A more modern window commemorates two brothers of the Clegg family who died during the Gallipoli offensive in 1915. The east window is by Clayton and Bell and was installed in memory of William Hutton (d 1881). In the north aisle is a 'martyr's window' depicting King Charles I flanked by St Alban and St Oswald.

It is a fascinating example of how 'high church' Anglicans ran a 'spin' campaign to turn Charles I into a saint by linking him to martyred Christian figures. They styled the dead Stuart king as Charles, King and Martyr, and created a feast day on 30 January, the date of his execution.

In the south-east corner is a 14th-century parish chest of oak, used for storing vestments. Look for masons marks on the piers, windows, and doors. The chancel screen is Victorian wand was erected by Rev John Thexton (served 1811-1844) in memory of his wife Isabella. 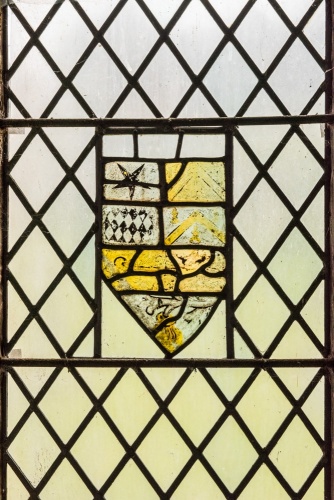 The font dates to the 12th century and features a pair of Jacobean panels. The font cover is Victorian.

St Michael's has one of the loveliest approaches of any church in England. A rose pergola leads from the churchyard entrance near the Wheatsheaf Inn towards the south porch. Approaching the church door through a tunnel of sweet-smelling roses in late summer is a delight.

The pergola was planted to mark the wedding of the Duke of York (later to become George V) and Princess Mary of Teck in 1892. It was replanted in 2012 to honour Queen Elizabeth II's Diamond Jubilee. 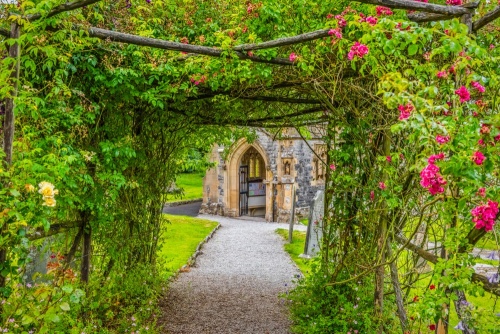 The church stands on Church Street, opposite the Wheatsheaf and just off the busy A6. There is no dedicated parking but it is easy to find parking along the village road. The church is open daily to visitors and was open when we visited. 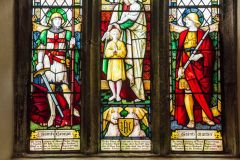 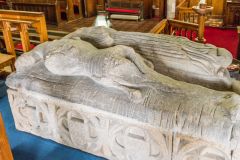 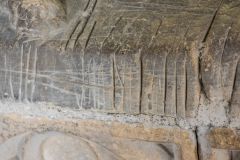 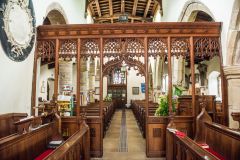