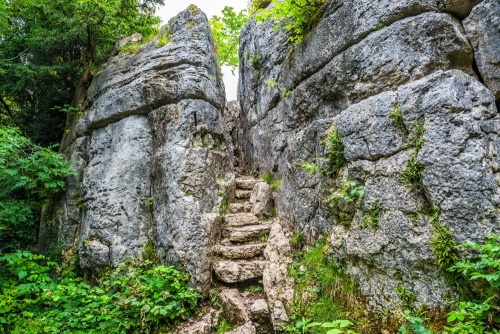 The Fairy Steps is a limestone staircase above the village of Beetham, Cumbria, in the heart of the Arnside and Silverdale Area of Outstanding Natural Beauty. The steps form an exceptionally narrow passage up a limestone outcrop.

The sides of the passage are as close as 1 foot (30cm) apart in places, making a climb up or down the Fairy Steps a treacherous balancing act.

It is much easier near the bottom where the cleft widens and there is a flight of shallow rock-cut steps, but as you ascend the Steps the cleft narrows and the 'steps' become difficult to navigate without bracing yourself on the sidewall. 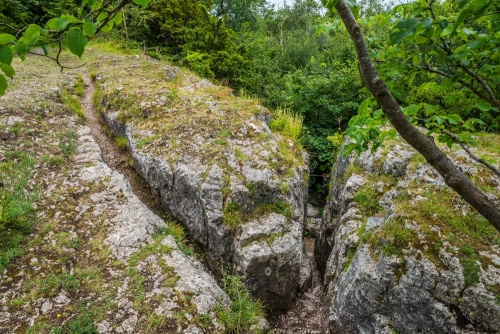 You enter the cleft at the upper left,
then turn sharply down

Several legends cling to the Fairy Steps. The most common legend says that if you can climb up or down the steps without touching the sides, the fairies will grant you a wish. In the late 19th-century tourists arrived in doves, drawn by the romantic idea of having the faeries grant them a wish.

Since the sides of the Steps are so narrow it seems unlikely that anyone has ever managed to get a wish! We tried going up and down and though it was fun, there was simply no way we could make the passage without touching the sides.

Another legend says that faeries used the steps to escape from a witch's cauldron and it is said that if you have the gift of the second sight you can see the faeries playing on the Steps. 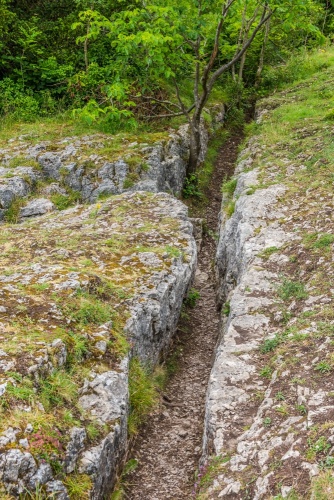 Entering the cleft - left turn ahead

Then there is the tale of the Cappel, a hell-hound said to haunt the Fairy Steps at dusk. It is a portent of bad luck if you see the hound, and if you stare into its eyes it is an omen of imminent death.

We're happy to say that we saw no faeries, demonic dogs, or witches at the Fairy Steps, just a wonderful view out towards Morecambe Bay and the Cumbrian mountains.

The Fairy Steps have a much more practical purpose. They form part of a 'coffin route' or 'corpse trail' for people from Arnside carrying their dead to St Michael's Church in Beetham for burial.

Until 1866 Arnside was a part of Beetham parish, so people attending worship in Beetham had to climb Whin Scar on Beetham Fell, squeeze through the Fairy Steps, and descend to the church for services. When a resident of Arnside died, their corpse was placed in a coffin and carried along the same route. 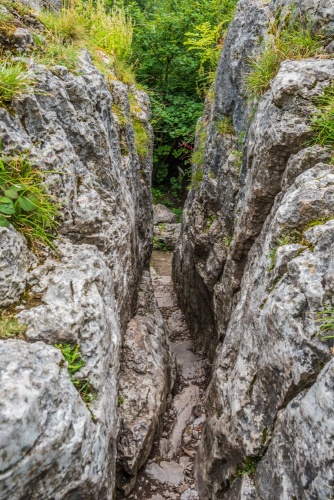 Going down the Fairy Steps

It is hard enough to climb up and down the Fairy Steps without carrying anything; to carry a coffin was exceptionally difficult. You can see where iron rings were driven into the limestone sides of the Steps to aid the burial party in winching the coffin up the narrow passage.

It must have been a huge relief to the people of Arnside when they got their own parish in 1866 and no longer had to make the trek up the Fairy Steps to Beetham!

Though the route was no longer needed to carry coffins, the Fairy Steps remain a popular point of interest on the network of paths over Beetham Fell. 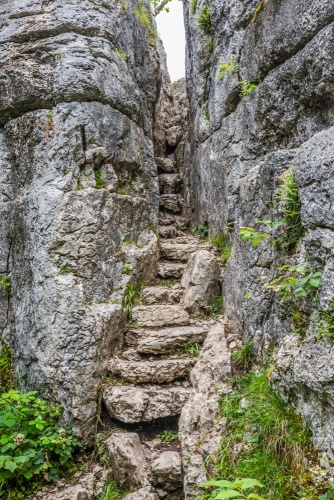 You can reach the Fair Steps from either side, but I've only made the walk from Beetham, so that's what I'll describe here.

From St Michael's Church in Beetham walk south on the minor road to the hamlet of Slack Head (sometimes spelled Slackhead). You will pass the roadside shrine to St Lioba on your left as you enter Slack Head. Look for a footpath fingerpost pointing up a rough track to your right.

This track curves past a row of houses before entering woodland. It climbs gently for 500 yards until you reach a crossing of several paths with a marker cairn. Turn left and follow the trail uphill until you emerge into the open air on top of Whin Scar. 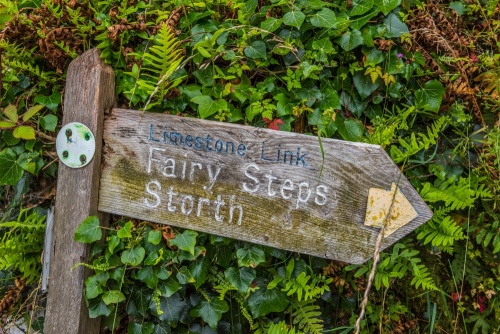 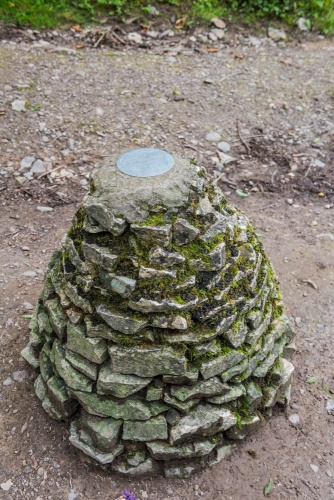 Look for the cairn where the trails meet

An alternative to this route is to start down Church Street in Beetham and look for a signposted footpath off to your left at the edge of the village. Follow this path until you reach the crossing of paths with the cairn mentioned earlier. Carry straight on up the hill and proceed as above. Both routes are roughly the same distance from Beetham.

The Fairy Steps are on the Limestone Link footpath that stretches 13 miles between Arnside and Kirkby Lonsdale.