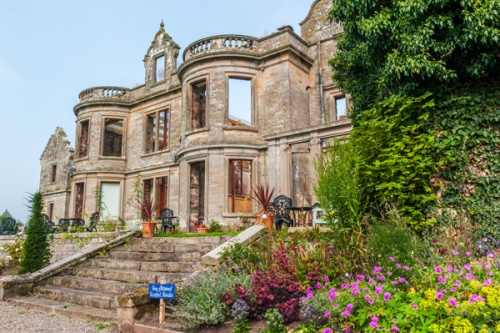 In the 12th century, the Earl of Cumberland granted the Barony of Levington, in northern Cumberland, to the commander of the Royal Army in the North, a nobleman named Richer de Boyville. The grant was later confirmed by Henry I, who needed strong supporters in the turbulent border region between England and Scotland.

De Boyville built a new castle at Levington but it was sacked by the Scots around 1320 and never rebuilt. By that time the Levington lands had been broken up, and the Kirklinton estate sold, and passed through several hands before it came to Edmund Appleby of Bewcastle. Joseph Appleby married an heiress of the Dacre family, and the family name eventually became Dacre.

In 1660 Edmund Appleby built an elegant new residence at Kirklinton, using stone from the original de Boyville castle. The Hall was designed in fashionable Jacobean style, with stepped gables in the Dutch fashion. The house forms an E-shape, with three storeys divided into five bays in the front. The Hall was enlarged in 1875 with the addition of 2 attic storeys, with a large L-shaped extension. 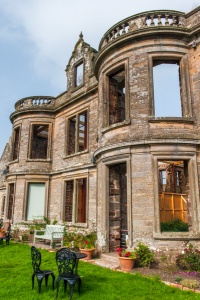 During the Second World War the Hall was requisitioned by the military and was used first as an officer's mess and later used to house refugees from Rossall School in Lancaster. After the war it was used for flats, then as a hotel, and finally as a casino and nightclub.

In that latter guise, it became a notorious hangout for gangsters, and the Kray twins among others are known to have frequented Kirklinton. The nightclub scheme eventually collapsed, and the Hall nearly did, too, falling into a desperate state of decay before it was finally rescued by a local barrister.

Work is underway to restore the 17th-century mansion to its former glory. Part of the restoration project involves restoring the walled gardens and grounds. The gardens include a formal terrace below the house, a wilderness area, or stream walk, a kitchen garden, nuttery, orchard, and quince grove.

One delightful feature is the 'Faerie Glen', a wooded walk beside the meandering Longcleughside Beck, with footbridges crossing above three cascades, and a trail leading to The Captain's Seat. At The Seat you can see an ancient carving of a face etched into the rock. According to tradition the likeness is that of Maelgwyn the Fair, a faerie princess, who fell in love with the first de Boyville to settle at Kirklinton.

When we visited the Hall seemed completely deserted, and we were able to wander around to our heart's content. Though the Jacobean hall is a shell, it is a terrifically impressive shell, and it is easy to see just how imposing it will be when restoration is complete.

It is rather fascinating to explore a historic building that is still in the process of being restored, because you can glimpse what it once was, and what it might be like in a few years time when the restoration is complete.

The gardens below the house are an absolute delight, and the grounds are beautiful, though it is obvious that much work still needs to be done. The Hall is open regularly during the Spring and Summer, and is well signposted from nearby roads. 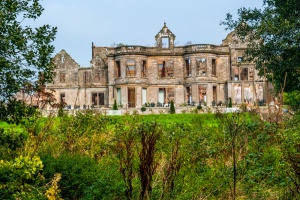 The Hall from the gardens 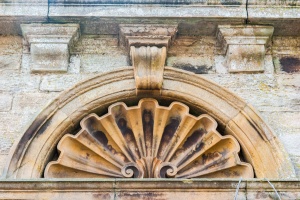 Scallop decoration over a doorway 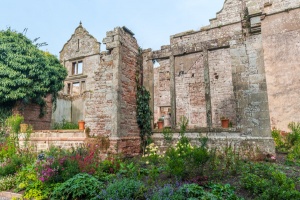 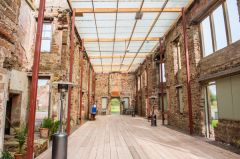 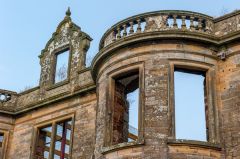 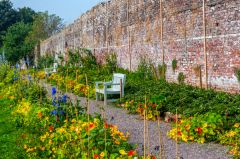 More self catering near Kirklinton Hall