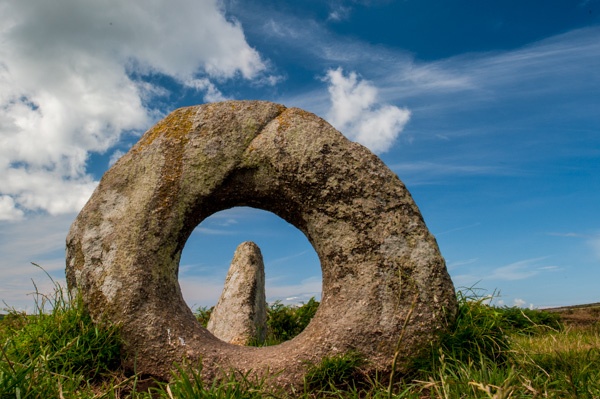 Men-an-Tol is an intriguing monument consisting of two upright stones standing on either side of a round stone with a hole through the middle. The site may have been associated with as chambered tomb at one time, as holed stones have been found at such tombs before.

Local legend tells that people who pass through the hole in the stone will be cured of illness. Children could be cured of tuberculosis and rickets by being passed through naked three times, and adults could crawl through nine times to cure themselves of rheumatism. I did crawl through the opening just for fun and didn't feel any different, but then I don't suffer from rheumatism.

There is a rough, unpaved parking area on the minor road between Morvah and Madron, at Grid reference SW418344. It isn't very well signposted, so be on the lookout! The parking area is about 1/4 mile west of Lanyon Farm. There is room for 8-10 cars.

Go through a farm fence - again, not well signed - at the north-east corner of the parking area, and follow the rough track for 800 metres until you come to a signed trail to the right. Here, thankfully, the signpost is very clear, so there's is no danger you will miss the trail.

Go over a stone stile and follow the clear trail for a few hundred metres and you will see the group of standing stones ahead. None of the stones is very high, so at first glance, it isn't a very impressive site, but the circular 'hole stone' is marvellous, and I'll wager no one under the age of 15 will be able to resist crawling through the hole in the centre of the stone.

It is hard to visit and not wonder what was in the minds of our ancestors when they created Man-an-Tol. What 'statement' were they trying to make with the shape and alignment of the stones.

The area is rife with prehistoric sites of interest, and Lanyon Quoit is close by. 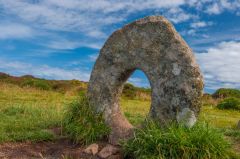 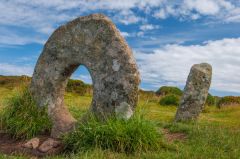 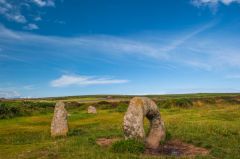 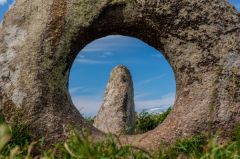 More self catering near Men-an-Tol

More bed and breakfasts near Men-an-Tol