HERITAGE HIGHLIGHTS:   The best example of a Georgian church in Devon 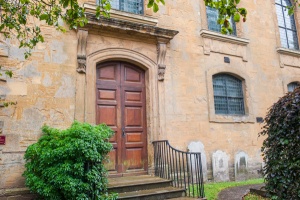 St George's Church is generally considered to be the finest Georgian church in Devon, and one of the best examples in England. It may have been built to create a place of worship for dissenters who were not comfortable attending the parish church of St Peter.

The new church was begun in 1714 at the corner of Fore Street and St Andrew Street, to a design by John James of London. Though the design was crafted in 1714 the church was not finished until 1733.

The facade facing Fore Street was chosen be a show front. The exterior is understated, with round-headed windows and rusticated quoins. The layout creates a symmetrical 5 bay rectangular box, lined with galleries, with a short chancel and east and west doors opposing each other.

The interior features a barrel roof decorated with fine plasterwork detail of roses. Neo-classical columns support the galleries, and the gallery walls are decorated with Ionic pilaster strips. The sense of symmetry is emphasised throughout, with matching staircases to the west gallery and north and south stairs at the east end of the nave. The chancel is decorated with Corinthian pilasters, and recessed panels flanking the altar hold the text of the Ten Commandments. 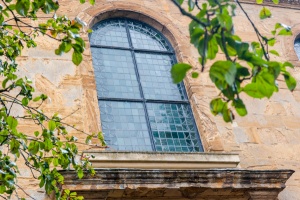 Georgian window on the west facade

The seating is a mix of 18th and 19th century and there are some very finely crafted 18th and 19th-century wall monuments. Perhaps the finest monument is to Henry Blagdon, who died in 1746.

What makes St George's church so interesting is that the interior was altered very little since it was built, and the result is an excellent example of Georgian style unaltered by subsequent changes in fashion. The only really notable additions to the Georgian design are the Victorian pulpit and font.

In the rather cramped churchyard is the grave of Tiverton native Hannah Cowley (d. 1809). Though largely forgotten today, Cowley was a well-respected dramatist in her time. Her best-remembered work is 'The Belle's Stratagem', a romantic comedy of manners that was first performed in 1780 and is still frequently performed today.

John James was the son of a Hampshire schoolteacher and parson. He was educated in Basingstoke and apprenticed to a master carpenter. He then worked at Greenwich, where he served as Clerk of the Works under architect Nicholas Hawksmoor.

He succeeded Hawksmoor as Surveyor to the Fabric of Westminster Abbey and assisted Sir Christopher Wren with St Paul's Cathedral. He is best remembered for his work at Twickenham, where he rebuilt St Mary's church and created a mansion for James Johnson, Secretary of State for Scotland.

Other buildings built at least in part by James include Appuldurcombe House on the Isle of Wight and St George's Hanover Square in London. He is generally thought of as a competent and highly respected architect of the early Georgian period, though not terribly innovative. A 'safe' choice, then, to design St George's church in fashionable Georgian style. 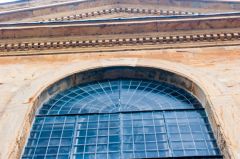 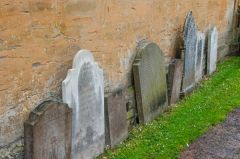 Self Catering near Tiverton