HERITAGE HIGHLIGHTS:   A rare medieval survivor of a church built into a city gate 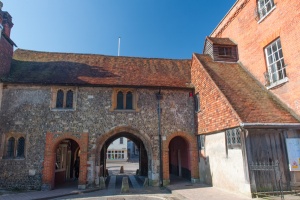 This very small church occupies a most unusual location atop the arch of Kingsgate, just a few yards from the Cathedral Close. Yet, for all its minuscule size, St Swithun's is quite as affecting as its grand neighbour, Winchester Cathedral.

It is believed that St Swithun's was a chapel for lay workers at the Abbey in medieval times. The interior is very plain, with whitewashed walls and an unadorned wooden ceiling. Sit for a moment in the simple wooden pews and it is hard not to feel a sense of peace despite the noise of traffic passing only a few yards away.

We do not know when the church was built; the first written record comes from 1264 when it was badly damaged by fire. That bald statement does not tell the real story; what happened was that the Prior of Winchester Abbey was locked in a dispute with the townsfolk. The citizens of Winchester burned down the church in anger.

The first record of the gate itself is from 1148, so it is certainly possible that the church was built into the gate at that early date. It was quite common for small churches or chapels to be built into the gates of medieval cities, where they might be used by travellers to give thanks for a journey safely completed or to pray for a safe trip elsewhere.

Only a very few of these 'gateway churches' remain, making St Swithun's a rare survivor. When the monastery at Winchester was dissolved in the Reformation and the shrine of St Swithun at the cathedral destroyed, the tiny church over the gate was put to use as a parish church.

The church is mentioned in Anthony Trollope's novel, The Warden, where Trollope calls it St Cuthbert's. 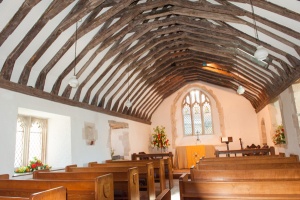 Interior of St Swithun upon Kingsgate

Does a church above a gate seem a good place to keep pigs? Robert Allen thought so. Allen served as a porter at Kingsgate sometime before 1660; he and his wife not only lived in the church but kept their pigs at one end.

You reach St Swithun's by climbing a narrow stair built into one side of the gateway arch. The staircase frame is timber, dating to about 1500. The east window contains fragments of 14th and 15th-century glass brought here from St Peter's Church in Chesil. Also brought here from elsewhere is the 17th-century altar rail, which comes from a nearby school. Most of the other furnishings are late Victorian.

There is a small brass memorial plaque on the wall to four young children of John Bond (d. 1612) who all died before the age of 4. There is a much more elaborate memorial to a local apothecary named William Widmore (d. 1756) who is described as 'a friend without guile. An Apothecary without Ostentation.' An empty niche in the east wall probably held a statue of St Swithun, which would have been removed at the Reformation.

The church is normally open daylight hours. I can attest to this fact, as I wasn't even aware of its existence on my first visit to Winchester, and practically stumbled into it! 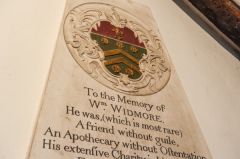 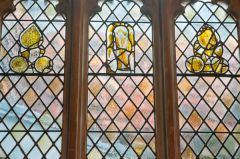 More self catering near St Swithun-upon-Kingsgate