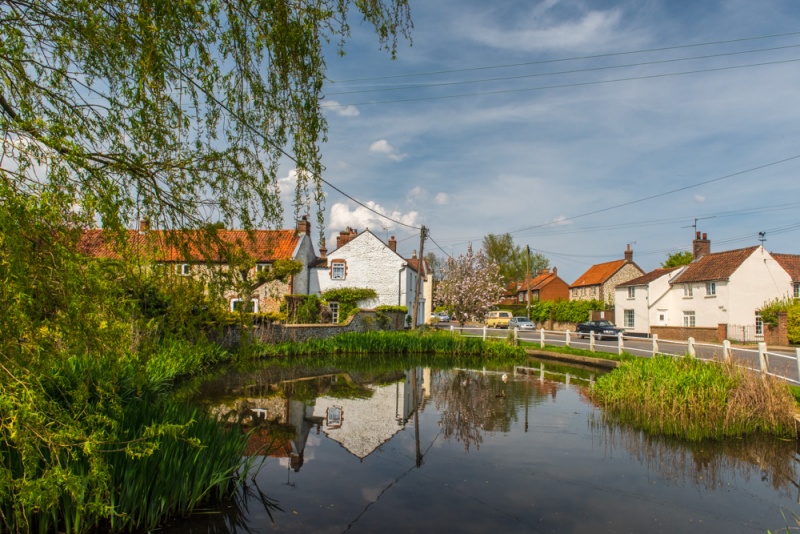 The village duckpond at Docking, Norfolk

In a county as flat as Norfolk the pretty village of Docking, near Kings Lynn, deserves mention. The village stands on the highest point in north-west Norfolk, and one of the highest in the county. The village name is the subject of debate amongst historians. It either means a place where dock grows, or 'the place of Docca's people'.

There was a settlement here in the Roman period and local residents have discovered Roman pottery, coins, and several roman earthworks.

On the south side of the B1454 as it runs through the village is Docking Hall, an early 17th-century country house. The house was built sometime around 1612 to a traditional E-plan design favoured during the Elizabethan period. The 17th-century house was remodelled by Ewan Christian in the 1850s.

Within the grounds are a carved effigy and a font thought to have been brought here from Creake Abbey after the abbey was suppressed by Henry VIII. The original Saxon village of Docking was located where the parkland of Docking Hall now spreads.

The village used to be known as Dry Docking, for good reason, as it had no water supply. It was only in the 1760s that a well was sunk to a depth of 230 feet that Docking residents had a reliable source of water, and then only if they paid a farthing for each bucket drawn from the well. The well continued in use until 1936 when at long last water pipes were laid, bringing fresh water from further away.

Historians believe that there was a priory located in Docking in the 14th century but as yet no trace has been found of the monastic buildings. Docking Priory was a daughter house of Ivry in Normandy. It was considered an 'alien house' (i.e. owned by a foreign monastery) and was granted to Joan, Dowager Queen of England in 1415 when alien priories were suppressed. From 1440 it was granted to Eton College by Henry VI.

The parish church is dedicated to St Mary the Virgin and dates to the 14th century, with inevitable restoration in the Victorian period. The oldest part of the church is the chancel, begun shortly before the onset of the Black Death in 1348. It is entirely possible that the church stands atop an earlier Saxon building connected to Bishop Aelfric (see above).

Historic treasures in the church include a marble altar table dated to 1638. The 15th-century octagonal font is beautifully carved, and has a rare depiction of St Appolonia, the patron saint of dentists, holding a pair of forceps.

Docking was once home to a workhouse, built in 1835 to house those without any means of support. The theory behind the workhouses was not what we would consider charitable; conditions were intentionally made so harsh that people would be deterred from entering them at all. The workhouse stood on the edge of the village on the Heacham road.

It was one of the largest workhouses in Norfolk and was made to hold 450 inmates. Curiously, it never held more than 100 people at any one time. The workhouse was taken over by the military in 1916 as barracks for RAF personnel from nearby Sedgeford airbase. After the war, it was converted into council housing, and was later converted once again into private apartments under the name 'Norfolk Heights'.

Outside the village is the site of RAF Docking, an airfield operating from 1940-1958. The field was home to RAF Coastal Command and the Royal Canadian Air Force. Another reminder of military presence are a series of WWI practice trenches dug by the Lovat Scouts on the edge of the village.

Perhaps the most famous native of Docking was St Henry Walpole, a Jesuit priest born here in 1558. Walpole was the eldest son of Christopher Walpole. He was educated at Peterhouse, Cambridge, and was called to the bar at Gray's Inn, London. Raised as a Protestant, Walpole converted to Catholicism after witnessing the execution of Edmund Campion at very close hand. He was reportedly so close to Campion that his clothes were spattered with Campion's blood when he was slain.

Walpole took Catholic orders and was eventually sent secretly to England, landing at Flamborough in Yorkshire in 1590. He was arrested and imprisoned at York, before being moved to the Tower of London where he was tortured on the rack numerous times. He was eventually tried and convicted in York for the crime of Catholic priesthood, before being hanged, drawn, and quartered in 1595. Walopole was beatified in 1929 and canonised in 1970 as one of the Forty Martyrs of England and Wales.

Another native of Docking was Revd. George Smith, born in 1845, who was one of the British defenders of Rorke's Drift during the Zulu War of 1879.

You can find out more about Docking's history through the Docking Heritage Group, which maintains a Heritage room in the village hall. The hall dates in part to 1869 when it opened as a Working Men's Institute. The hall was extended by The Oddfellows in the 1920s.

The Docking village sign was erected to mark the coronation of George VI in 1936. It is carved with figures representing Docca, the supposed founder of the village. With him is a bishop's mitre representing Bishop Aelfric.

I first discovered Docking by accident, while driving to Brancaster on the coast. I came around a corner on the B1454 and saw the pretty little village duck pond, with picturesque whitewashed cottages around it, and I just had to stop and explore!

More self catering near Docking

More bed and breakfasts near Docking