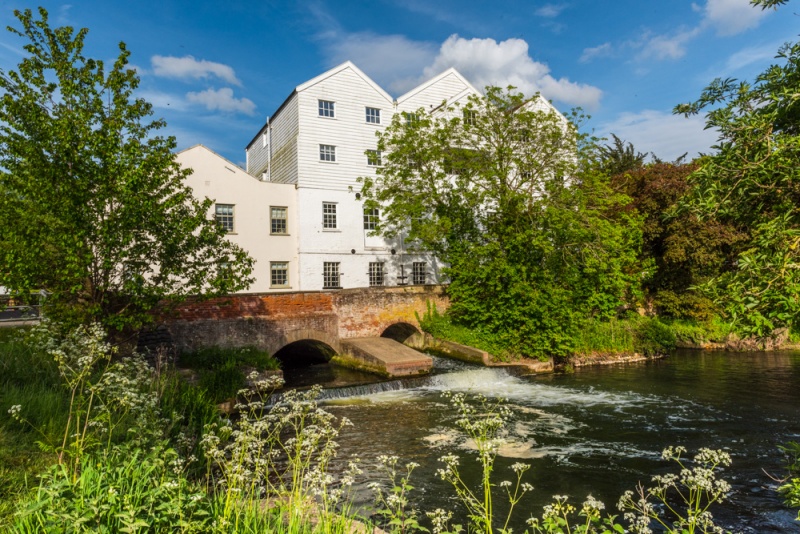 There has been a mill at Buxton, on the River Bure, since before the Norman Conquest. A mill was recorded in the Domesday Book of 1086. That mill was built and rebuilt over the centuries, with the last major rebuilding in 1754, when William Pepper created the present mill building of painted brick and white weatherboarding under a pantile roof.

Pepper was a merchant living in Buxton. He created an extremely clever design for the watermill using a pair of wheels (a third was later added, but only used if sufficient water power was available). The larger wheel was 16 feet diameter, and operated on a breastshot design, using river water for power.

A smaller undershot wheel was powered by water from the Aylsham Navigation canal, flowing through the locks at Buxton. The large breastshot wheel was converted to a more efficient turbine in 1902.

The millwheels ground grain for animal feed, as well as flour for baking. Biscuit flour could be milled, using electrically driven roller mills.

The mill stands four storeys high. On the east side there are three gabled bays, with an overhanging sack hoist in the centre. The sack hoist, called a lucam, projects over the road below. To the north is Mill House, built in the 18th century as accommodation for the miller. It was converted from a former granary building.

A fascinating newspaper account from 1766 shows that the William Pepper mill at Buxton joined with mills at North Walsham, Aylsham, and Worstead to commit to grinding small quantities of grain at reduced prices for poor customers.

Interestingly, the four firms also committed publicly to grinding grain 'without adulteration', a reminder that less scrupulous millers had a reputation for adding all manner of low-quality material like chalk and powdered bones to flour. 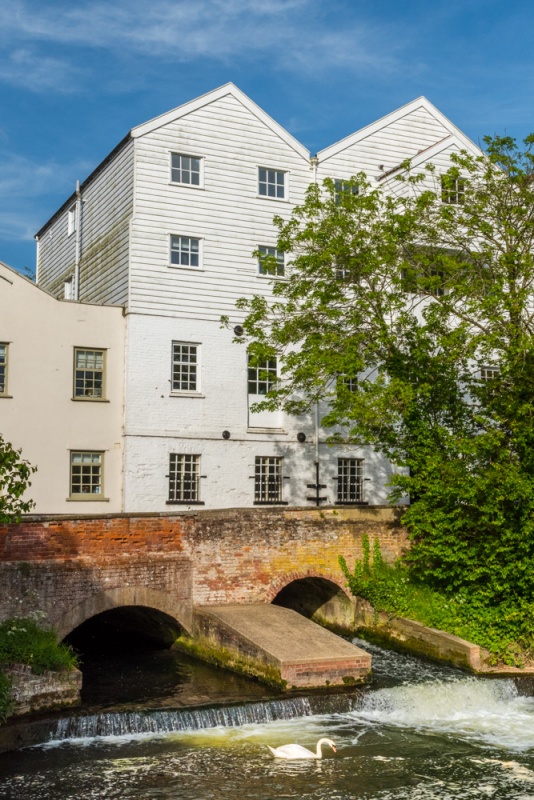 A swan swims below Buxton Mill

In the 20th century the mill buildings were extended to provide extra storage, as the milling process became more efficient. For example, the mill more than doubled its production when grain was brought to the mill in bulk rather than in individual sacks. Almost all the grain ground at Buxton mill was from locally grown grain.

From 1924 the mill was owned by the Duffield family, who owned numerous mills in the area. They remodelled the Buxton mill in 1951 and effectively doubled its capacity, only to double it again with another expansion in 1964.

The mill remained in operation until 1970. In the following year it reopened as a craft centre, with a gallery, picture framing service, and restaurant. The building was gutted by fire in 1991. Restoration took over a year, and involved scouring Britain for pitched pine timbers. The restoration involved bringing in huge timber beams, some weighing over a tonne, from as far away as Scotland. The mill became the largest timber-frame restoration project in Britain.

The restoration cost over a million pounds and returned the building to its 18th-century state. It was converted into a hotel and conference centre, but later in 2005 was converted once more into apartments. Thankfully, throughout all these changes in use, the historic mill building remains as it was over 250 years ago, and forms an iconic site for motorists on the road through Buxton village.

We don't normally feature historic attractions that are not regularly open to the public, but since the mill is so easy to view, and is so incredibly picturesque, we thought readers might like to know more about its history.

I first encountered Buxton mill on a sunny afternoon in May, as I was driving to visit Buxton's parish church down the road. As I came around a bend in the road and saw the mill in front of me, with swans swimming in the water below the outflow, I knew I had to stop and explore. It is such an incredibly picturesque building, and given the terrible fire in 1991, it is remarkable that it is still here for us to enjoy.

More self catering near Buxton Mill