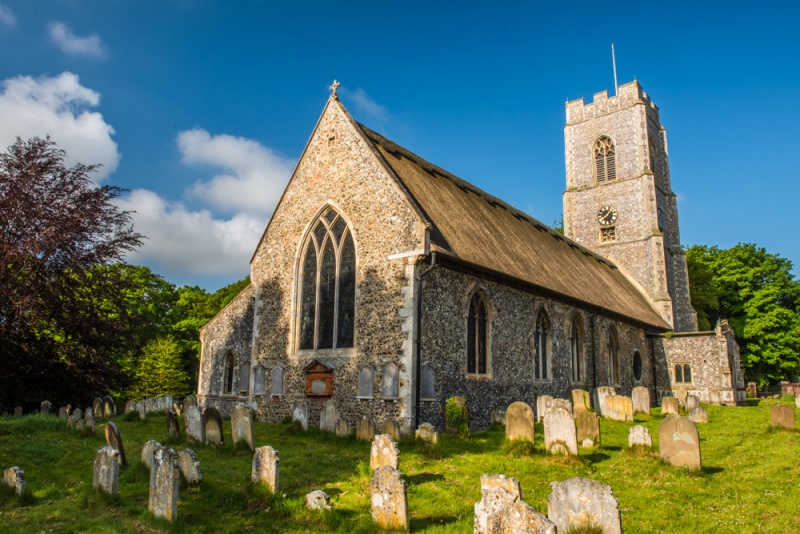 Above the peaceful River Bure stands the ancient church of St John the Baptist in Coltishall. At first glance, this large, attractive church may appear to be late medieval, with the tall, striking Perpendicular tower that appeared in so many East Anglian churches in the 15th century.

But appearances can be deceptive, for as you look closer you see telltale signs that St John's is much, much earlier. Incorporated into the north wall, facing Church Street, are reused Roman bricks and tiles, and set high into the walls are small, round Saxon windows known locally as 'wind-eyes'.

Above the Saxon wind-eyes is a picturesque thatched roof of Norfolk reed.

The original Saxon building was enlarged in the 12th century, then again in the 15th century, and the entire building was restored in Victorian times. In the north wall is a round Victorian window with medieval glass brought here from a continental church destroyed in WWII. The glass depicts the head of John the Baptist being brought before Salome. 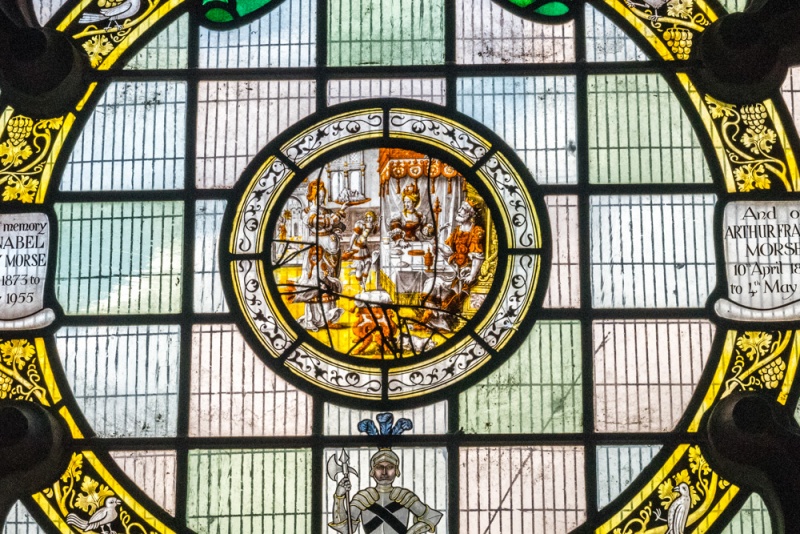 The south arcade is 14th century, in beautiful Decorated Gothic style. Over the centuries the slender arcade columns have slanted outward at a marked angle, a style known locally as 'Slant 'n dicular'. The plaster ceiling of the nave is 18th century. Behind the altar in the Lady Chapel is a tapestry screen, brought to Coltishall from a Belgian church in 1918. It is of indeterminate age but may be centuries old. Below the tower is a small 17th-century gallery.

Separating the nave and chancel is a beautifully carved and painted 15th-century rood screen, restored in 1910.

On the south wall of the nave is a 15th-century sedilia, a seat for clergy. Over the sedilia is a 12th-century lancet window.

Beside the north porch door is a memorial to William Perkins, who died on 4th February 1711. Or was it 1712? In reality it was both, for at that time the new year was said to start on 25 March, not 1 January.

The oldest feature in the church is the Purbeck marble font, a survivor from the Norman church here. It is quite worn, with obvious damage suffered during the Reformation and again during the English Civil War. The bowl is square, carved with blind arcading, and supported by five cylindrical pillars.

One of the more interesting wall tablets commemorates Thomas Webb (d. 1840) who acted as 'Historical Engraver to the Queen'. Nearby is a poignant tablet to Charles Archdale, who died in action at Cambrai in 1917. Set into the floor is a grave slab to Martha (d. 1692) and Owen Plumstead (d. 1704). Beside Owen's date of death is a crossed bones symbol, a reminder of mortality.

Tucked into a corner is an elegant memorial to Henry Smith, an attorney, who died in 1743.

St John's is a delightful historic building in one of the prettiest riverside villages in the Norfolk Broads. It is normally open daily to visitors and was open when we visited. 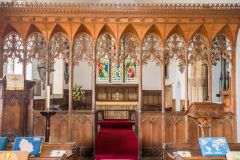 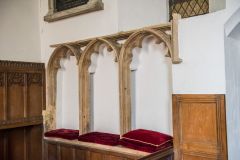 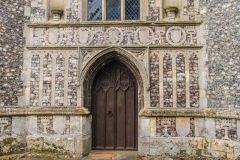 More self catering near Coltishall, St John the Baptist

More bed and breakfasts near Coltishall, St John the Baptist

Self Catering near Coltishall