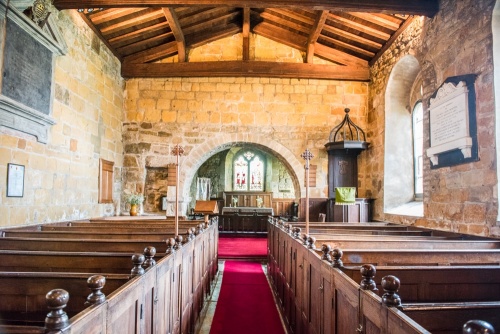 The village of Husthwaite dates to the period of Scandinavian settlement in northern England during the 9th century. The name comes from the Norse words for houses in a woodland clearing.

While we know something of the village origins the history of the parish church of St Nicholas is more obscure. We do know that the church here was a chapel linked to the monastery at nearby Coxwold, and it seems likely that the monastery and the church were closely linked over the Scandinavian era.

After the Norman Conquest Husthwaite was given to the Archbishop of York and became a prebend of York Minster. In the chapter house of York Minster is a seal used by the prebendary of Husthwaite. 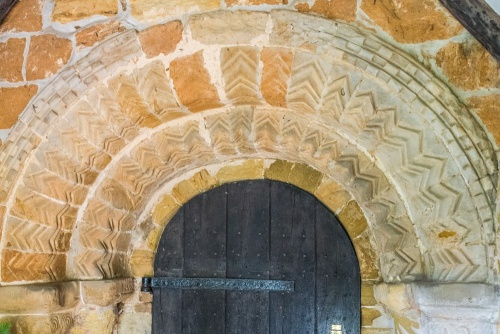 The church is built mostly of golden-toned stone quarried locally. The core of the church is a two-celled Norman building consisting of a nave and chancel.

Round-headed Romanesque arches survive, including the beautifully-carved south doorway. This was probably crafted in the middle of the 12th century and features three receding orders of jambs and two orders on the arch itself. These are decorated with traditional chevron carvings.

The blocked north doorway is also Norman, though more plainly decorated. The chancel arch is an excellent example of very simple Norman architecture, with no moulding and plain imposts (the moulding where the arch springs from the supporting columns). There are deeply=splayed Norman lancet windows in the north walls of the nave and chancel. 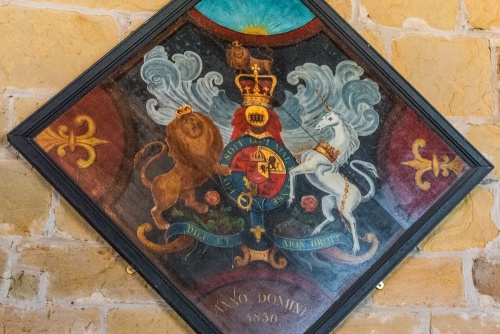 The unusual 1830 royal coat of arms

In the south wall of the chancel is a doorway inserted in 1683 - as attested by a very worn carved date.

The base of the west tower has Norman masonry, while the upper stage was rebuilt in the 15th century in Perpendicular style. In the belfry hang three bells, cast in 1626, 1707, and 1726.

The historical highlight inside St Nicholas Church is its collection of box pews. The easternmost pews date to the 18th century. The church also has several examples of wooden furnishings by the famous Yorkshire woodcarver Robert 'Mouseman' Thompson of Kilburn. look for Thompson's trademark muse symbol carved in several places around the church. Thompson carved the lectern, altar, psalm board, hymn board, roll of honour, and reredos. 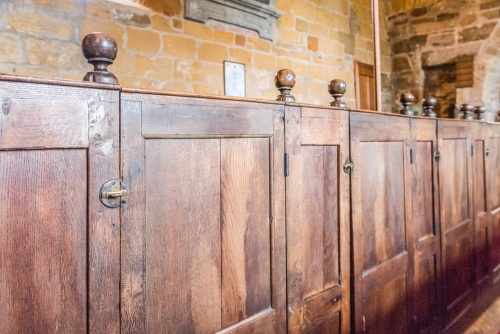 The font is modern but has a 17th-century wooden cover. The pulpit and canopy are late Georgian. Over the pulpit is a lead crucifix discovered buried in the churchyard. It is thought to be medieval.

There are several good Georgian and Victorian memorials, including wall tablet to three generations of the Goulton family. The oldest of the three generations was Francis Goulton, who died in 1737. Another Georgian tablet commemorates Robert Midgeley, who died in 1761. Perhaps the most interesting memorial is that of Rev Robert Peirson (d 1803), Archdeacon of Cleveland and Master of the Grammar School in Coxwold, who also served as the vicar of Husthwaite.

On the wall is an unusual lozenge-shaped royal coat of arms painted in 1830. 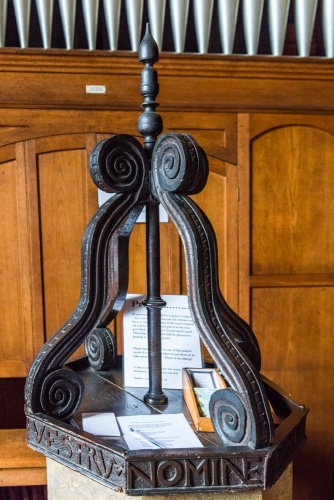 St Nicholas' Church stands at the junction of Low Street and High Street in the centre of the village. There is parking along the road. The church is normally open to visitors during daylight hours and was open when we visited. 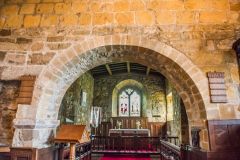 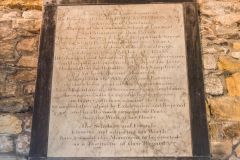 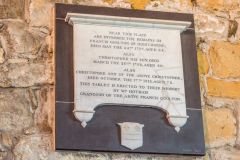