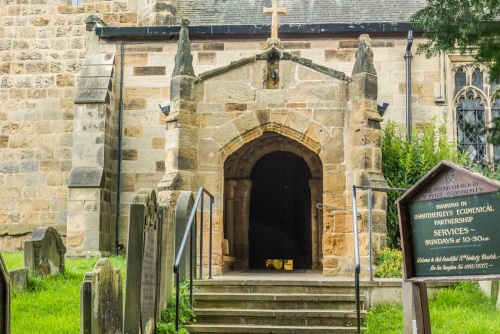 There was an Anglo-Saxon church in Osmotherley but the present church, dedicated to St Peter, was built around 1190, probably by the Carthusian canons of Mount Grace Priory, just outside the village. It was for centuries a possession of the Bishops of Durham, until they passed the patronage to the Bishop of Ripon in 1836. In 1860 it passed to the Crown.

Mason's marks found at Mount Grace are similar to those visible in the belfry of St Peter's. We know that there was a stone church here before the Norman Conquest, and probably an even earlier timber building before that. 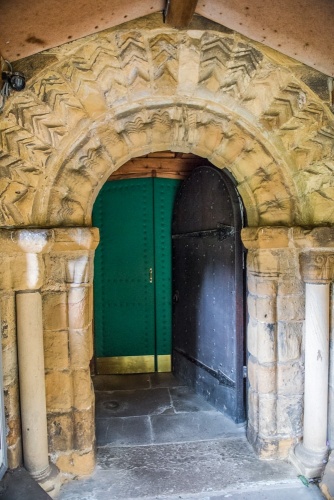 The tower is a 15th-century addition, as is the porch. Within the porch are a collection of 10th-century carved stones and other 12th-century carved fragments. Among the oldest stones are two pieces of a cross-shaft decorated with Scandinavian chain plait designs.

Then there is a fragment of a Viking hogback gravestone, thought to be the work of a band of travelling masons who came to Yorkshire via Ireland. Aside from these Pre-Conquest stones, there is a 12th-century scalloped capital.

Inside the south door stands the font, thought to date to the Saxon period, or the 12th century at the latest. You can see the mark made on the rim of the font bowl by an iron lock fitting, in the days when fonts were protected by locked covers. The font is extremely simple; it is a straight tub, or cylinder, with the only decoration being cable moulding around the rim. 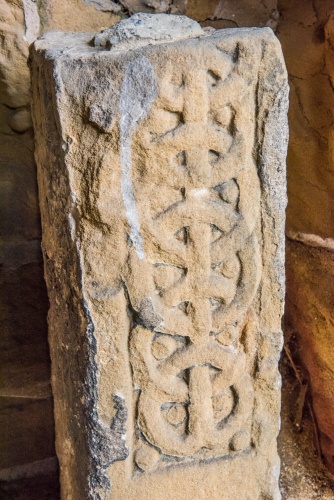 Part of a 10th-century cross shaft

The oldest part of the building itself is the nave, built around 1190. The pews were added around 1790. The pew panels were mounted on the walls in a restoration in 1892.

The chancel dates to the 13th century. Look for the blue stone in front of the altar. This is thought to have covered the grave of Sir James Strangeways, a late-medieval nobleman who left money in his will to 'make an aisle on the south side of the choir' for a grave to hold his and his wife's bodies.

In the south wall are a sedilia and the remnants of an original priest's door. The east window is by CE Kempe, installed during a late Victorian restoration. It commemorates John Yeoman, who died in 1890. 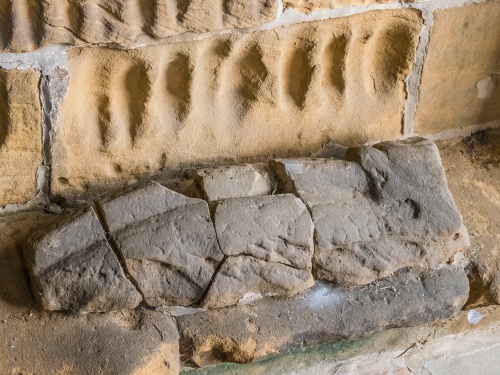 Part of a Viking hogback gravestone

Under the tower is an old bell bearing the arms of the Fishmongers Company. The bell probably came from Mount Grace Priory and bears the inscription 'Sancte Petre ora pro nobis' (St Peter pray for us). On the wall are two painted boards bearing the Lord's Prayer and part of the Ten Commandments, suggesting that there was at least one other painted board, now vanished.

On the south side of the aisle is a village war memorial. One of those local men who died in WWI was Arthur Kirby, who is remembered by a small brass plaque. Kirby served as a Lieutenant in the 5th Durham Light Infantry, attached to the machine gun corps of Thimbleby Grange in Osmotherley parish. He was killed in action at Inverness Copse in Flanders on 25 September 1917 at the age of 19. 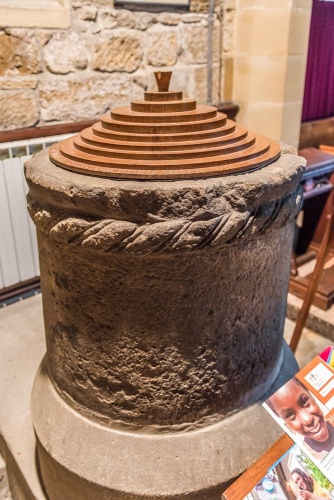 St Peter's Church is on School Lane, just around the corner from the village crossroads. The church was open when we visited and is well worth a visit for the very early carved stones in the porch. 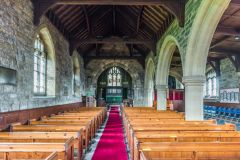 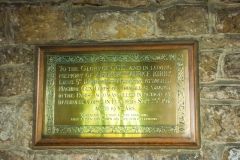 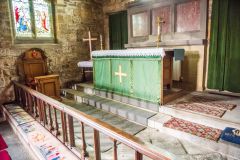 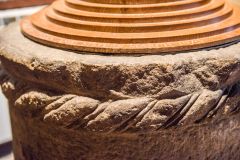