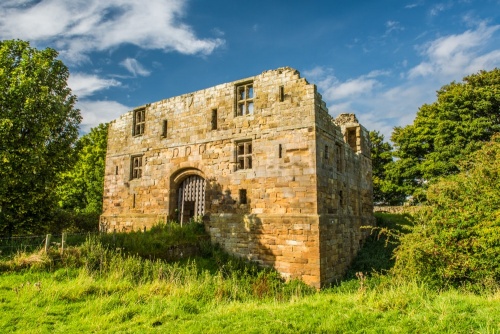 Whorlton Castle is a ruined 14th-century tower house on the site of a Norman motte and bailey fortification, built on a spur of the Cleveland Hills. Only the castle gatehouse and the vaulted undercroft of the tower house remain.

In 1066 William the Conqueror defeated King Harold at the Battle of Hastings and was crowned as King of England. But just because he wore the crown did not mean that he controlled his newly won kingdom.

The north of England rose in rebellion against the Normans and William responded with utter ruthlessness. In what became known as the 'Harrying of the North' he cut a swathe of destruction across the North, burning crops and destroying villages, leaving the inhabitants at least temporarily cowed. But William wanted more than a temporary peace, he wanted control.

To ensure that he could keep the inhabitants under his thumb William built, and encouraged his barons to build, a series of castles across Yorkshire and the north. One of these castles was built at Whorlton, near Swainby, on the north-western fringe of the North York Moors.

The effect of the Harrying of the North on Whorlton is easy to see; the Domesday Book of 1086 reveals that at the time of the Conquest Whorlton was valued at £24, but 20 years later in 1086 it was worth only £1 and 3 shillings.

At the time of the Conquest, Whorlton had been owned by Gospatric, Earl of Northumbria but the Earl supported Edgar the Aetheling's revolt against the Normans.

As a result, William deprived Gospatric of the Earldom and gave his estates to Robert, Count of Mortain. From Mortain it passed to Robert de Meynell, and it was likely he who built the first castle at Whorlton, possibly re-using the site of an earlier fort built by the Brigantes tribe at the time of the Roman invasion.

That first castle was a rudimentary mote and bailey earthwork topped by a timber palisade. It occupied Castle Bank, a spur of the Cleveland Hills. One very unusual feature is that the motte was square rather than the more typical oval shape. The bailey was rectangular. Nearby was a park reserved for the lord's hunting. 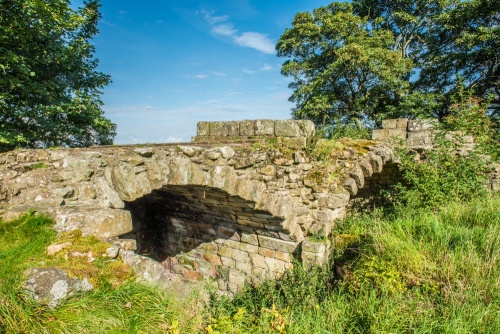 The 11th-century castle passed to Lord Darcy of Knaith in 1343. Darcy pulled down the earlier castle and levelled the motte. In its place, he built a fortified tower house of stone. The house was defended by a curtain wall, with an inner ward reached through an impressive stone gatehouse. This 14th-century gatehouse is all that remains today of Whorlton Castle.

In 1418 Sir James Strangways took possession of Whorlton through marriage to the Darcy heiress Elizabeth Darcy. The Strangways held the estate until 1541 when the powerful Dacre family claimed that the Strangway estates as a whole should be theirs.

The case dragged on through the courts until Henry VIII took a hand personally - by seizing control of Whorlton for himself. He then granted the castle to Matthew, Earl of Lennox in 1544.

It was possibly from Whorlton Castle that Lady Margaret Douglas, the Countess of Lennox, wrote to her niece Mary, Queen of Scots in 1561 to propose a marriage between Mary and her son Henry Stuart, Lord Darnley.

By the 17th century, the medieval tower house was once more in royal hands but it was allowed to lapse into a state of poor repair. A smaller house was erected within the castle grounds. This house was in use for a century but when the Bruce family took ownership they pulled down the castle and the later house and used the stone as building material for other projects. More stone was removed in 1875 to help build the parish church in Swainby village. 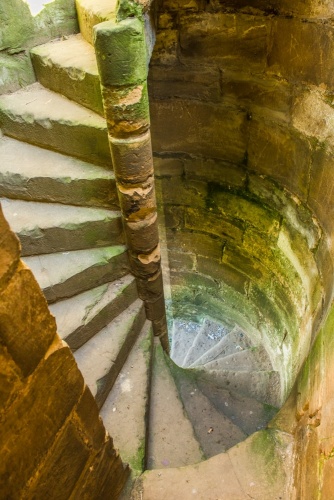 Spiral stairs in the tower house

The vaulted undercrofts feature some nicely pointed 14th-century windows, and you can see a staircase with an arched doorway on the west side of the house. Atop one of the undercrofts is a very peculiar structure looking like a stone cistern.

You can easily make out the earthworks, especially east of the castle where you can see fishponds and the park.

Do take care exploring the ruins. The site is not maintained and there is always a risk of falling masonry.

Whorlton Castle is relatively easy to find. From Swainby village take Whorlton Lane, heading towards Whorlton House. After about 500m you will pass the castle ruins on your left. There is no sign and no place to park, but we found a parking area on the verge outside the nearby Whorlton Old Church (Church of the Holy Cross), 100m further on. Note that there is no signage to let you know what to look for amid the ruins.

It is well worth exploring the Church of the Holy Cross while you are there. Inside the church is a wooden effigy of Lord Nicholas de Meynell of Whorlton Castle, who died in 1322. The effigy is made of bog oak and is beautifully preserved. 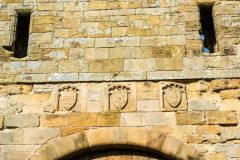 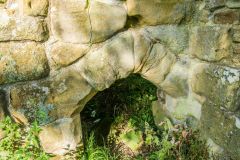 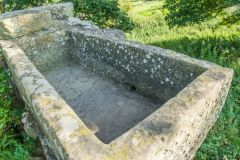 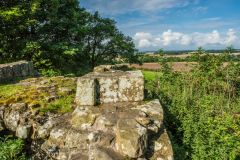 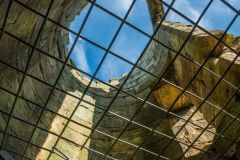 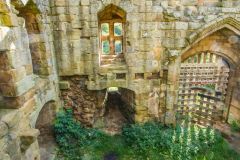 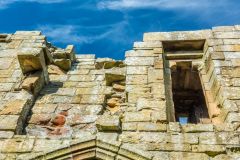 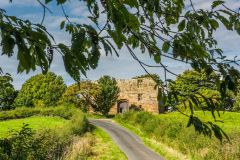 More self catering near Whorlton Castle