HERITAGE HIGHLIGHTS:   Links to the legend of Fingal 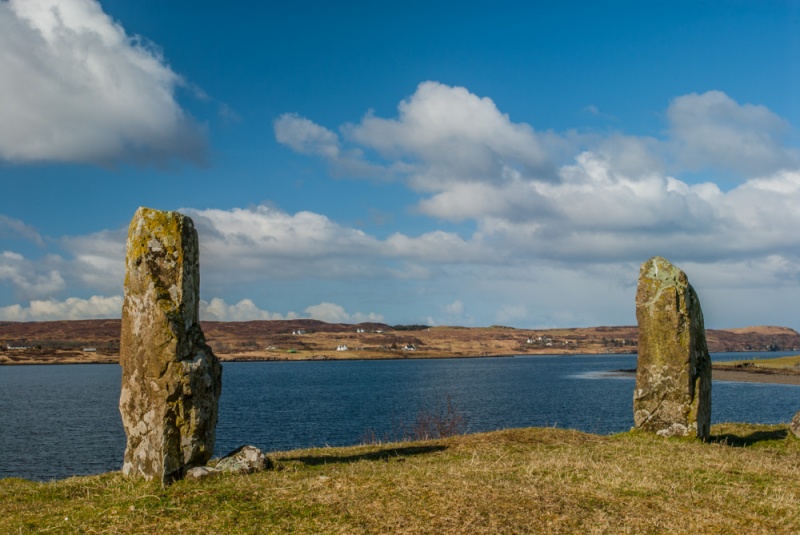 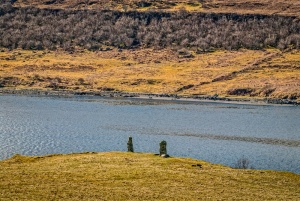 The standing stones from the roadside

The most interesting feature of the Kensaleyre stones, apart from their superb location by the loch, is the story told about them in Skye folklore.

The stones are also known by their Gaelic name Sornaichean Coir' Fhinn. The name relates to an old legend that the mythical warrior Finn, or Fingal, and his band of hunters used the stones to suspend a cooking pot over a fire. The pot was so large that it held a whole deer, which Fingal used to make venison stew. 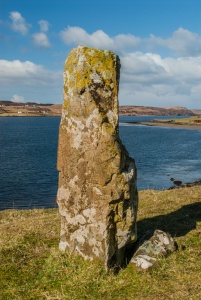 The legend also says that there were originally three stones, which tallies with the theory that the pair of stones once formed part of a stone row, or alignment, running NNW to SSE. For this reason, the stones are sometimes called the Eyre Alignment.

The remains of two burial cairns can be seen nearby.

There are several more ancient stones and burial sites in the area including a burial cairn with kerbstones on the north side of the A87, and several other standing stones, but the pair at Kensaleyre are both the easiest to reach and the most impressive.

The stones are easy to spot off the A87 between Kensaleyre and Eyre. Unfortunately, parking is non-existent. I managed to pull off the road by some houses further north along the road and walk back to the stones. The stones are in a farm field, at the very edge of the shore, and there is a gate giving access to the field. The stones are not signposted but are so easy to spot from the road that you really can't miss them.

Nearby accommodation is calculated 'as the crow flies' from Kensaleyre Standing Stones. 'Nearest' may involve a long drive up and down glens or, if you are near the coast, may include a ferry ride! Please check the property map to make sure the location is right for you.