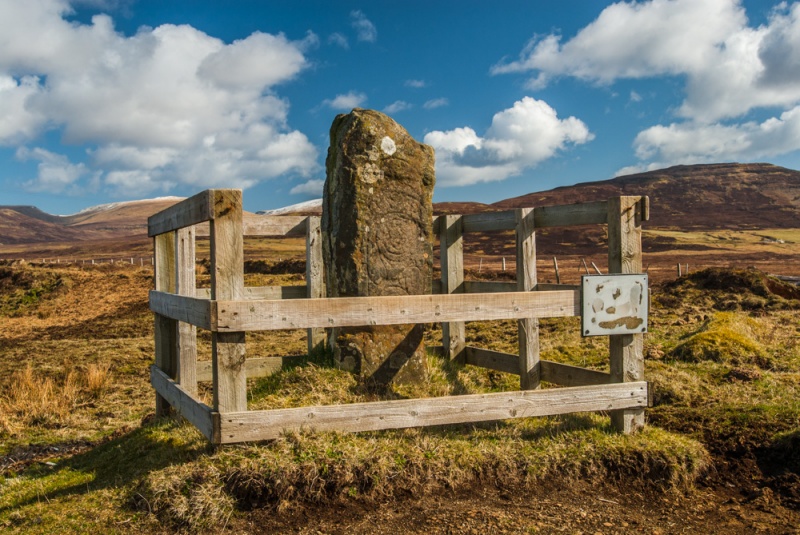 On a small hill off a minor road north of Skeabost, at the head of Loch Snizort Beag, stands a solitary stone carved with traditional Pictish symbols. The stone is named for the nearby township of Tote, but is sometimes referred to by its Gaelic name of Clach Ard, which translates aptly as 'tall stone'. 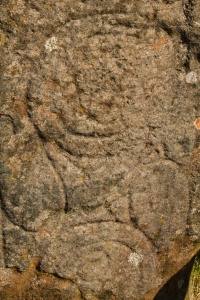 The double-disc and
Z-rod symbol

The Tote Pictish Stone is basalt, and may date to the 7th century (though some archaeologists suggest a slightly later 8th-century date). It stands about 4 1/2 feet high, 1 foot 7 inches wide, and is an irregular five-sided shape, with the carved face looking south.

The face is carved with common Pictish motifs, including a mirror and comb at the base, a double-disc above with a Z-rod under it, and at the top a crescent and V-rod. The area around the symbols has been decorated with small circles with a round dot in the centre. These small circles are now very worn and indistinct.

What do the symbols mean? The truth is, that though the symbols have been the subject of much study by archaeologists, no one really knows. They could be religious symbols, a coat of arms relevant to a family or ruling class, or even a territorial marker.

The stone is protected by a wooden fence, but the carvings are extremely easy to see. 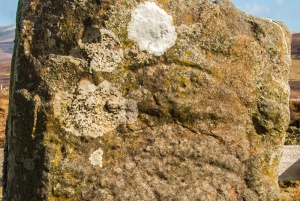 The stone has had a chequered past. For centuries it was served as a door jamb for a nearby house owned by a shoemaker. It was recognised as a symbol stone in 1880, and re-erected on a small rise above the township.

Though the stone has suffered from the effects of weathering, being out in the open, the carvings are still very easy to make out. You can see where the stone was shaped at the base to be used as a door jamb. The base of the stone also shows wear suggesting it was used as a tethering post for animals.

What is the stone doing here? Most Pictish stones are found in the east of Scotland, primarily in Aberdeenshire and north, while extremely few have been found in western Scotland, including two others on Skye.

It is quite easy to find the stone. The road to Tote is just off the B8036 just north of its junction with the A850. If you are coming from the north (Uig) just take the B8036 off the A87, go past the Prabost turnoff, and take the next right towards Tote. The stone is about nine metres north of the road, looking over the township, and very close to a gravel pit.

Nearby accommodation is calculated 'as the crow flies' from Tote Pictish Stone. 'Nearest' may involve a long drive up and down glens or, if you are near the coast, may include a ferry ride! Please check the property map to make sure the location is right for you.