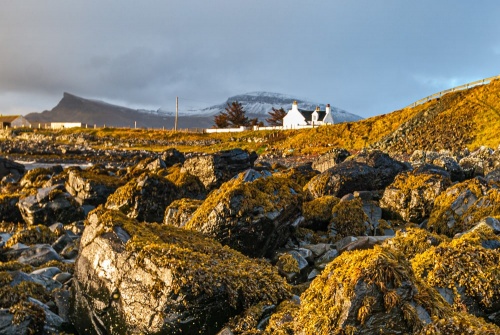 Kilmaluag is a scattered township at the northernmost tip of the Isle of Skye's Trotternish Peninsula. It includes the hamlets of Solitote, Aird, Connista, Kendram, and Balmacqueen. The township's name means 'Church of St Moluag', referring to the 6th-century saint who brought Christianity to the region.

In 1931 local residents cutting peat discovered a 1st-century wooden keg of bog butter at Kilmaluag. The practice of lowering kegs of food into peat bogs was widespread in Ireland and Britain, where the low temperature and highly acid environment in the bog acted as a form of primitive refrigerator, preserving foodstuffs for years. The Kilmaluag keg had been carved from a single piece of birch.

The bog butter and its container were sent to the Regional Museum in Aberdeen for analysis but were subsequently lost. 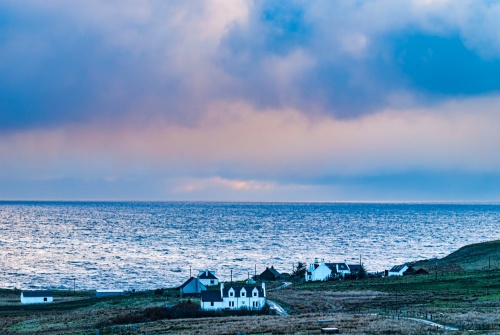 Kilmaluag gives its name to a Middle Jurassic geological formation, a series of sedimentary layers set down around 167 million years ago. The Formation was created as the land between the Western Isles and the Scottish mainland rose and fell, resulting in a climate that alternated between a warm sea and exposed land masses with lagoons.

The Kilmaluag Formation is characterised by dolomitised limestones, fine grain sandstones, and mudstones. There are large numbers of fossil deposits, including remains of fish, mammals, and reptilian dinosaurs.

You can see outcrops of the Kilmaluag Formation around the harbour area. 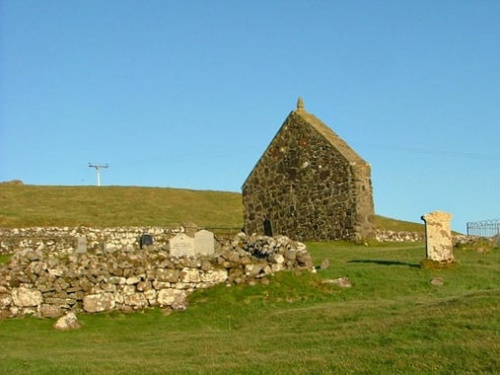 The only historical attraction of note in Kilmaluag is St Moluag's Church, located a stone's throw inland from the bay. The first written record of a church here dates to 1507 and the last record of a rector comes from 1573. The church lost importance at the Reformation and the church at Kilmuir became the parish church for the northern settlements of the Trotternish region.

St Molag's church was allowed to fall into decay, and today only the gabled west wall is intact. Even this is not original; it was restored after WWI when a memorial tablet to the men of Kilmaluag who died in the war was erected.

The rest of the church is visible only as turf-covered foundation walls. Parts of the east and south walls are visible, standing to a maximum height of 1m and stretching 1m wide. The church measures 13x6.5m externally.

St Moluag (c510-592) was an Irish missionary and a contemporary of St Columba. He is revered today as the patron saint of Argyll.

A hundred metres to the north of the churchyard is a well known as Tobar Helbert, where the water issues from between two stone slabs. The well is located at NG436751, at the high water mark on the edge of the bay.

An investigation in 1961 concluded that there was no spiritual significance to the well, but the name probably derives from 'Tobar Iobairte', which translates as 'the well of sacrifice' or 'the well of offering', which does suggest that the well had some religious tradition associated with it. 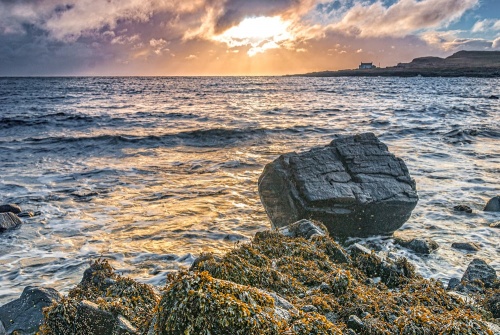 If Kilmaluag has a heart, it is Port Gobhlaig, reached by a single-lane road off the A855 immediately east of Solitote. There is a parking area near the shore, with wonderful views east across Kilmaluag Bay towards the Wester Ross coast on the mainland.

A few miles to the east is Duntulm Castle, a ruined late-medieval clifftop stronghold erected by Clan Macleod.

Photo of St Moluag's Church is (c) Dave Ferguson and is republished with gratitude under a Creative Commons license.

Nearby accommodation is calculated 'as the crow flies' from Kilmaluag. 'Nearest' may involve a long drive up and down glens or, if you are near the coast, may include a ferry ride! Please check the property map to make sure the location is right for you.

More self catering near Kilmaluag, Skye