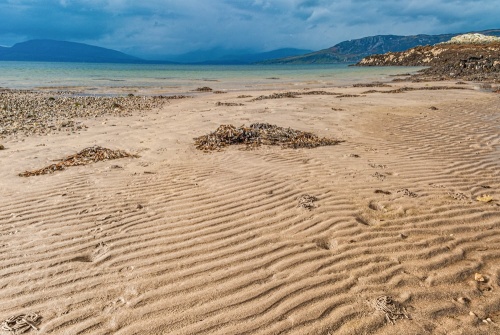 Ord is a hamlet on the north-west coast of the Sleat Peninsula, with superb views looking across Loch Eishort to the peaks of the Black Cuillins. The community is centred around a wide sandy beach fringed with jagged rocks.

Beside the road through Glen Ord are the remains of a disused quartzite quarry. The quarry began in 1944 but went out of business in 1960. Only the explosives building and a storage hut still stand. The hut is now used as a bothy.

Ord was the setting for the 1867 book 'A Summer on Skye' by the poet Alexander Smith, whose book featured the oldest house in the village, Ord House, built around 1750 for Charles MacDonald.

The house was rebuilt in 1810 and features a walled garden where an 'Ord Palm' thrives. The palm is of the species Cordyline Australis and was grown from seeds sent from Australia by a former tenant that Charles MacDonald had helped to emigrate. Ord House was the very first house on Skye to have running water and a fixed bath. 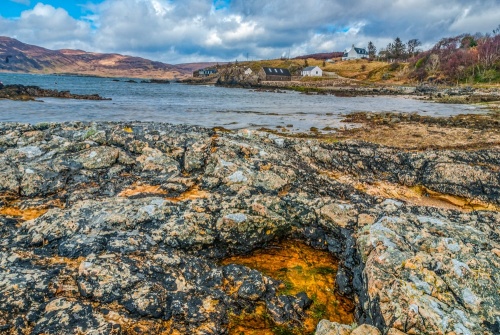 Just north of the road into the village is the ruined church of Teampull Chaon (St Congan's Church). All that remains are the foundation walls, which survive to a maximum height of 2'6". The church forms a rectangle and is roughly 26' long.

The foundation walls are overgrown and in a poor state of repair. A modern cairn supports a plaque that reads, 'Teampull Chaon (St Comgan's Chapel). This cairn is erected to the Glory of God and in memory of St Comgan who preached the gospel here in c. 720 AD.'

Chaon (aka Comgan or Congan) was an 8th-century prince, the son of Cellach Cualann, King of Leinster, and brother of St Kentigerna. Sent into exile, he abandoned his worldly titles and lived a life of simplicity in Lochalsh, where he established a monastery. He is thought to be buried at Iona. 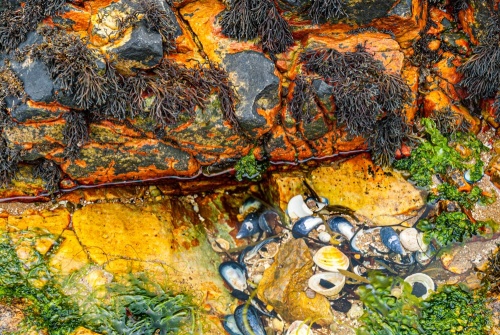 Investigating rock pools on the beach

About 300 yards NNW of the church is Tobar Chaon (Congan's Well), thought to be the remains of an ancient holy well. It is immediately above the high-water mark by the shore. The well is now enclosed in a concrete cistern and used as a water supply for the nearby farmhouse.

As you enter Ord by the minor road that links the east side of the Sleat Peninsula to the west, you come to an obvious gravelled area with room for cars to park. This gives easy access to the wide expanse of Ord beach, where on a fine day you get outstanding views across Loch Eishort to Blaven and the Cuillins. Take the time to explore the beach, which has wonderful tidepools.

Our family was fortunate to attend a tidepool event on Ord beach hosted by rangers from Forestry and Land Scotland, who showed us the vast array of plant and animal life that abounds in the small pools along the beach. 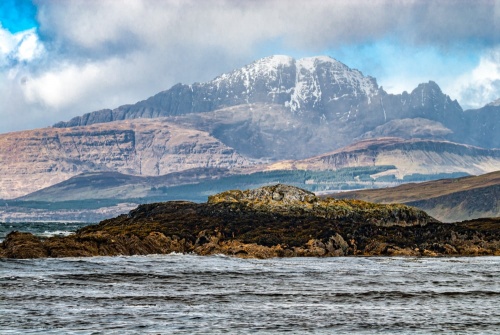 Looking west to the Cuillin Hills

If you follow the track by the shore and head north, skirting the white-painted garden wall of An-Acarsaid, you will come to the Ord Coral Beaches, remote beaches made up of crushed coral and minute pieces of shells. For more details of getting to the beaches, see the excellent article on Skye For All.

In the walled garden of An-Acarsaid there is a 'water horse' skeleton (in reality a Cuvier's beaked whale'). The garden used to be open to the public, but the last time we checked this was no longer the case.

Ord can be reached only by the single track road that leads west off the A851, up Glen Ord, following the course of the River Ord to Loch Eishort. The road begins just south of Duisedalebeg and loops past Ord, down the west coast of Sleat, to Tarskavaig before heading back east towards Kilbeg. This rough circular route is known as The Ord Loop.

A few miles south of Ord is Tokavaig, where a short path across fields brings you to the ruined medieval fortress of Dunscaith Castle, perched on a rocky outcrop and reached only by a precarious bridge from the mainland. Dunscaith Castle, also known as the Fortress of Shadow, was built in the 13th century by Clan Donald of Sleat.

About Ord, Skye
Address: Ord, Isle of Skye, Highlands and Islands, Scotland
Attraction Type: Village
Location: Reached by the single-track road up Glen Ord off the A851. There is an obvious parking area above the beach.
Location map
OS: NG613128
Photo Credit: David Ross and Britain Express

Armadale Castle Gardens and Museum of the Isles - 5.9 miles (Museum)

Nearby accommodation is calculated 'as the crow flies' from Ord. 'Nearest' may involve a long drive up and down glens or, if you are near the coast, may include a ferry ride! Please check the property map to make sure the location is right for you.

More self catering near Ord, Skye