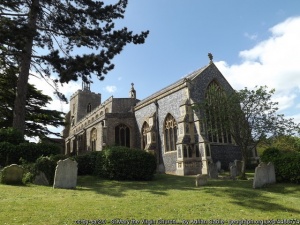 Diss is a pretty market town south of Norwich, on the border between Norfolk and Suffolk. The town grew up close to the River Bure and is on the mainline rail service between Norwich and London.

The historic core of Diss is a designated conservation area with a pleasing mix of Elizabethan, Georgian, and Victorian shops and houses. There are 157 listed buildings in Diss. Only one is listed Grade I; the medieval parish church of St Mary. There are two Grade II* listed buildings, Dolphin House on Church Street and 2 Mount Street.

The name Diss comes from the Anglo-Saxon tern 'dic' meaning a ditch or embankment. The town was mentioned in the Domesday Book of 1086 when it was part of Suffolk. There was a church at that time, a forerunner of the present 14th-century parish church of St Mary the Virgin.

At the time of Domesday, Diss was a Crown possession. It remained royal hands until sometime around 1135 when King Henry I granted the estate to Richard de Lucy. De Lucy rose to become the Chief Justiciar under King Stephen and his successor, Henry II. In 1152 De Lucy received a market charter, allowing him to hold a regular market in Diss.

The estate passed by marriage to the FitzWalter family and in 1299 Lord FitzWalter was granted a royal charter for an annual fair. The fair was banned in 1872 after it became too rowdy. It seems likely the same Lord FitzWalter rebuilt the church, as his initials appear in several places on the south porch.

Opposite the church stands Dolphin House, built in the 16th century, probably by a wealthy wool merchant. The house served as a pub for over a century but is now home to several small shops. Dolphin House borders on the town market place, which is still home to a weekly market as it has been for the past 800 years. 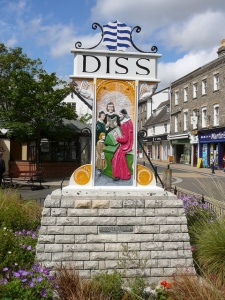 Perhaps the most famous native of Diss was the poet John Skelton, who was born here in 1460. Skelton served as Henry VIII's tutor before retiring from court life and returning to Diss as the rector of St Mary's Church. Other well-known natives of Diss include Thomas Lord, the founder of Lord's Cricket Ground in London.

In 1871 workmen repairing a house on Mount Street discovered a buried hoard of over 300 15th-century silver coins.

Diss is home to a six-acre lake known as The Mere. This is thought to be the second-deepest lake in England - though that depends how you measure the depth. There is only about 6m of water, but beneath that is another 23m of mud. The Mere was once thought to be the mouth of an ancient volcano but modern scientists believe it is a natural basin formed when the underlying chalk bedrock collapsed at the end of the last Ice Age. Keep your eyes peeled for the 'monster of the Mere', a 45kg (100lb) catfish measuring six feet from nose to tail.

Four miles outside Diss is RAF Thorpe Abbots airfield where you can explore the 100th Bomb Group Memorial Museum. Just west of Diss on the A1066 is Bressingham Steam and Garden, where you can see a wonderful collection of vintage and antique steam vehicles in the setting of a historic garden. Take a narrow-gauge railway ride through the gardens and see historic steam engines being restored.

You can learn more about Diss and the surrounding area at the Diss Museum in the Shambles building in the market place.

Diss is on the A1066 about 20km (12 miles) east of Thetford. It is also on the direct rail line from London Liverpool Street Station to Norwich.

More self catering near Diss

More bed and breakfasts near Diss

Self Catering near Diss