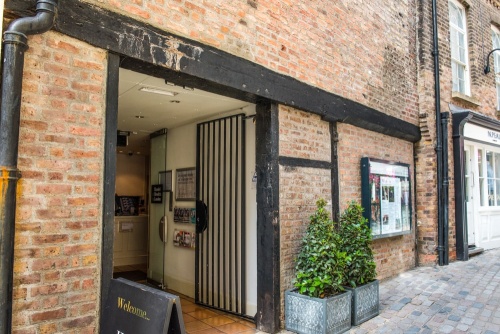 This fascinating museum tells the story of two musical icons who lived 200 years apart yet each, in their own way, influenced musical history. The museum combines the attractive Georgian house at 25 Brook Street where composer George Frideric Handel lived from 1723 until his death in 1759, with a top-floor flat at number 23 Brook Street that was the home of rock star Jimi Hendrix in 1968-69.

During his residence at 25 Brook Street, Handel composed several of his most enduring works, including the Messiah, Music for the Royal Fireworks, and Zadok the Priest.

When Handel first came to England he lived with a succession of patrons. His increased income from performances of his operas and his appointment to the royal court earlier in 1723 meant that he could now afford to rent his own house and not rely on wealthy patrons.

The location on Brook Street (named for a nearby tributary of the River Tyburn) was firmly middle-class, located close but not too close to the artistic hotbeds of Covent Gardens and Soho, and conveniently near St James' Palace, where his court duties lay. The house was also convenient for the King's Theatre in Haymarket, where Handel's Italian operas were performed.

In 1723 Handel took a sub-lease on the house from a Mr George Barnes, paying an annual rent of 60 pounds. Laws at the time made it impossible for foreign nationals to own property, or even take up a long-term lease. 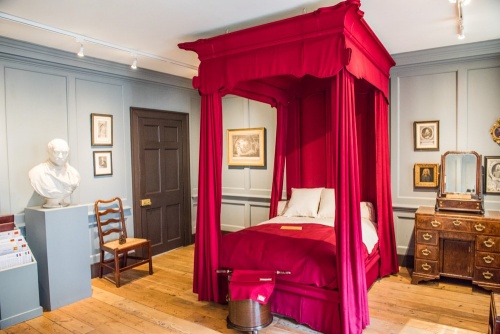 In the basement was a kitchen, with front and back rooms on the first two floors and an attic above. The first room on the first floor was the largest in the house. This was where Handel entertained, and probably where he kept at least one of his large musical instruments.

Linked to this large room is a smaller chamber where Handel composed music. The second floor was given over to a bedroom and dressing room, and the attic was used as sleeping quarters for up to 3 servants.

The Brook Street residence was far more than a private home; it was also Handel's business premises. Visitors would pay for and collect season tickets for opera performances and collect music scores they had commissioned.

After Handel's death the house passed through the hands of numerous tenants, including a doctor, apothecary, writer, diplomat, and a succession of military men. The front room became a shop and the upper floors were used as office space. In the mid-1950s the textile firm Viyella occupied the upper floor.

Eventually, the house was purchased by a charitable trust, and the museum opened in 2001. The interiors of 25 Brook Street have been restored as faithfully as possible to the way they looked in the Georgian period. The restoration made use of a household inventory taken 4 months after Handel's death to determine how the rooms were used and what furniture they contained during Handel's time here. 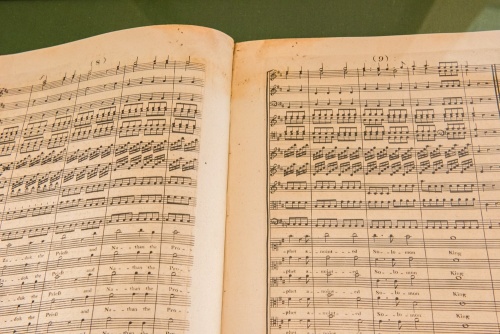 The original score of Zadok the Priest

There are four main rooms on view. On the first floor is Handel's Music Room and his Composition Room, while on the second floor is the composer's bedroom and dressing room. Handel is believed to have died in his Bedroom, though not in the replica four-poster bed that we see today. The bed is quite short by modern standards, partly because Handel slept sitting up, a position that was thought to aid digestion.

As its name suggests, the Composition Room was where Handel composed his musical works. It was here that he composed The Messiah in just 24 days. Next door is the Music Room, where he rehearsed and performed his works, and entertained guests. Though it was officially the Dining Room, this chamber actually served a dual purpose of making music and dining.

Handel would use this space to rehearse the cast of performers before a new performance of his work, often in front of a select group of specially-invited friends and patrons. This audience would be treated to the sight of the famous composer swearing at the performers in several languages while he put them through their paces.

Perhaps the most intriguing exhibit displays some of Handel's original scores, including Zadok the Priest, which shows discolouration where Handel rested a tankard on the page while working out the composition.

Above the original scores is a portrait of Handel attributed to William Hoare, and nearby is a fascinating 'Land Assessment Book', a form of tax record, showing the taxes due for residents of Brook Street, including Handel, in 1746/47. Aside from Handel's tax assessment of 25 pounds and 5 shillings, taxes due are noted for other residents including the Duke of Buccleuch, the Countess of Essex, and the Duchess of Rutland. It is clear that Handel's home was well-placed for connection with high society.

Though it is a museum of Handel's life, 25 Brook Street is much more; it keeps alive the legacy of this great composer through regular recitals of his work and works by contemporary Baroque composers. There are weekly concerts and a changing programme of recitals throughout the week.

The walls are hung with portraits of Handel and the people who moved in his circle. There are displays on Handel's life and work, and even a 'Composer in Residence' programme to carry on Handel's legacy. 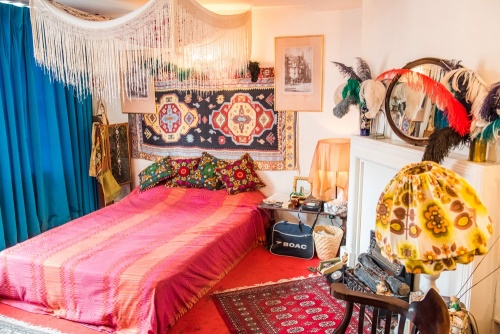 Handel & Hendrix museum is really 2 houses combined, numbers 25, where Handel lived, and number 23, the upper floor of which was the home of rock star Jimi Hendrix in 1968-69. You access the flat via the original 18th-century staircase that Hendrix used to get up to his top-floor flat.

There are 4 rooms on view; a small photo gallery, an exhibition on Hendrix's life and music, The Record Room, exhibiting albums from Hendrix's large record collection, and 'The Hendrix Room', the musician's bedroom. The bedroom has been recreated precisely as it was during the guitarist's time here, with the help of his partner at the time, Kathy Etchingham, and photos of the room taken during the period from January-March 1969.

Several of the bedroom features are original, including the oval mirror over the bed. On a bedside table are copies of Hendrix's handwritten lyrics for Voodoo Chile. Look for the Beogram 1000 record turntable, with a ha'penny piece taped to the arm to prevent it from skipping. Perhaps the most endearing item in the bedroom is Dog Bear, knitted for Hendrix by a fan.

The Hendrix Exhibition, next to the bedroom, is full of personal items such as musical equipment and original outfits designed by Hendrix himself for his Jimi Hendrix Experience performances. one that caught my eye was a gold floral jacket created for Hendrix by Dandie Fashions in 1967.

On the musical side of things you can see an Octavia Pedal designed by Roger Mayer and Hendrix in 1969. This style of pedal, first used in Hendrix's recording of Purple Haze, produces a sound one octave higher than the note being played.

In a special display is 'The Brook Street Guitar', an Epiphone FT79 acoustic guitar purchased second-hand by Hendrix in New York for $25. He brought it back to England after The Experience's first US tour. He used the guitar to work out riffs and musical arrangements before moving to an electric guitar to create his finished version of the music. The guitar was always kept within reach, often beside his bed in the neighbouring room. He is known to have used this guitar longer than any other documented guitar during his all-too-brief career.

On the wall is a limited edition Jimi Hendrix Fender Stratocaster made in 2015, based on Hendrix's distinctive 'flipped over' guitar.

The Record Room holds over 100 albums collected by Hendrix during his time in London. He would often shop for records at One Stop Records on South Molton Street. Other albums were gifts from other musicians who visited his flat. Looking at the spindle wear on the records reveals which albums Hendrix listed too the most. Among the most frequently played were Bob Dylan albums, but curiously, a recording of Handel's Messiah also features among Hendrix's favourite albums. 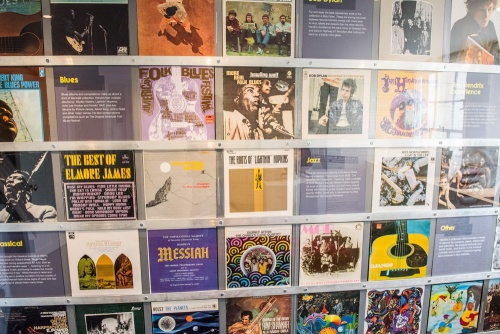 The entrance to Handel & Hendrix in London is not immediately apparent from the Brook Street frontage. In fact, if it wasn't for two small blue plaques on the front facade you wouldn't know there was anything of interest here. The entrance is around the back, off a small courtyard.

I had an interesting chat with one of the museum staff and she told me that in the days when the museum was devoted solely to Handel it suffered years of diminishing numbers of visitors and even faced the prospect of closing down permanently.

Against this backdrop of gloom and doom, they ran a special one-off exhibit giving people access to Jimi Hendrix's flat, over the objections of museum board members who didn't think they should have anything to do with rock and roll. The lines of visitors waiting to get in stretched around the block, just for the chance to see an empty bedroom where Hendrix had lived.

That convinced the museum directors that they needed to expand their vision and create a joint visitor experience linking two iconic figures in musical history.

When we visited there was a classical musical group rehearsing in Handel's Music Room, so we could only get a view of the room from the doorway but to hear the house filled with beautiful music, in the very place where that music was composed, was a special treat.

By far the easiest way to visit Handel & Hendrix in London is by tube, alighting at Bond Street Station. From the station exit, go down Molton Street to Brook Street, and you will see the museum immediately opposite. 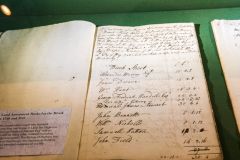 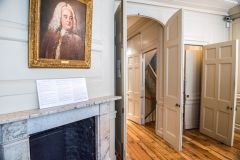 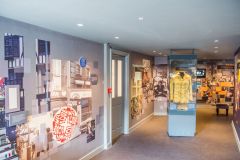 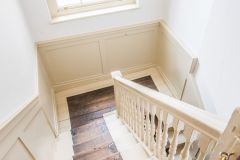 Note: You can get Free Entry to Handel & Hendrix in London with the London Pass

More self catering near Handel & Hendrix in London >>

More bed and breakfasts near Handel & Hendrix in London >>