HERITAGE HIGHLIGHTS:   Keepers of the all records of tradition heraldry. 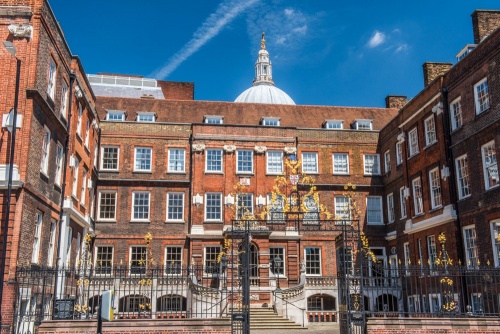 College of Arms
The College of Arms grants new coats of arms, keeps records of arms, genealogies, flags, changes of names, and royal licenses. Though the heralds do have purely ceremonial duties, they also act as a source of knowledge and advice on the peerage, matters of precedence and honours, and the use of symbols on both personal and civic flags.

Heralds traditionally had the duty of running tournaments, which involved organising jousts, acting as a master of ceremony for the event, and keeping score. From this, they evolved to become experts in armorial symbols worn by contestants, and then to actually recording and controlling the use of those symbols.

That last task involved becoming experts in genealogy, so they could determine who was related to who, and thus who was entitled to use a specific symbol.

Heralds became part of the royal household in the 13th century and by 1420 were granted their own seal. In 1484 Richard III granted the heralds a charter of incorporation and gave them a building on Upper Thames Street where they could hold their records.

Henry VII seized that building when he took the throne from Richard, and it was not until the reign of Queen Mary that the heralds were given a new royal charter and a new headquarters. Their new building was called Derby Place but this burned down in the Great Fire of London. Money for a new building was largely raised by public subscription. 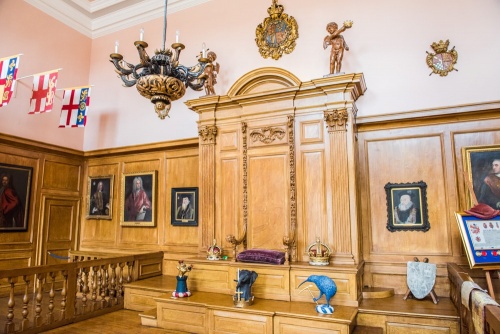 The current brick building was erected in its place in the 1670s to a design by Francis Sandford and Morris Emmett, the royal bricklayer. The hall, known as the Earl Marshal's Court, is regularly open to the public. It is a spacious and lofty chamber, two stories high, with a throne in the centre and a gallery at one side. A Record room for the College archives was added in 1842. The College of Arms is one of the few 17th-century buildings in this part of London and is remarkably unaltered.

Though the military functions of the College of Arms have diminished, the College frequently is called on to investigate the rights of individuals to use heraldic symbols.

The College of Arms has a distinct hierarchy of officers. At the top is the King of Arms, sometimes called the King of Heralds. Beneath him are Heralds, and junior Heralds are known as Pursuivants (from the French for a follower). These ranks still exist in the 13 Officers of Arms that make up the College today. The College is the oldest existing heraldic court in the world.

Though the actual administration of the College falls to the Officers of arms, the titular head is the Duke of Norfolk, acting as hereditary Earl Marshal. Each Herald is specially appointed by the monarch by letters patent, on the recommendation of the Earl Marshal. 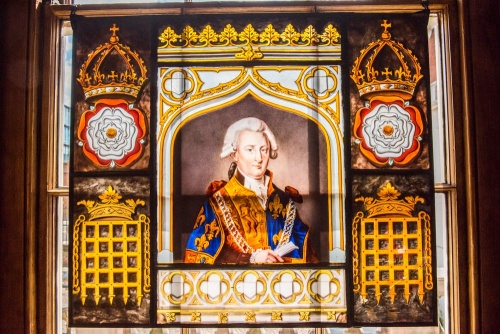 What do Heralds do?

Heralds are responsible for State ceremonies like coronations, the State opening of Parliament, and State funerals. They organize the annual Service and Procession of the Order of the Garter, and the Garter King of Arms introduces new peers into the House of Lords. At all these official ceremonies the Officers of Arms wear their traditional scarlet uniform with a sleeveless jerkin called a tabard showing the royal arms embroidered in gold thread.

Apart from these high-profile ceremonies the Officers of Arms have more mundane daily tasks researching applications for the right to bear arms and family history research. In this role they answer enquiries from across the world on a regular basis.

One of the most interesting exhibits at the College of Arms is a collection of artefacts associated with the Battle of Flodden in 1513. There is a sword, dagger, and ring said to have been taken from the body of James IV of Scotland by Thomas Howard, Duke of Surrey.

The Howard coat of arms recalls this event, with a symbol showing the royal coat of arms of Scotland with the Scottish lion cut off at the waist and hit by an arrow. Unfortunately for the Howards and the College, experts concur that the three artefacts date from the late 16th century, many years after the Battle of Flodden! 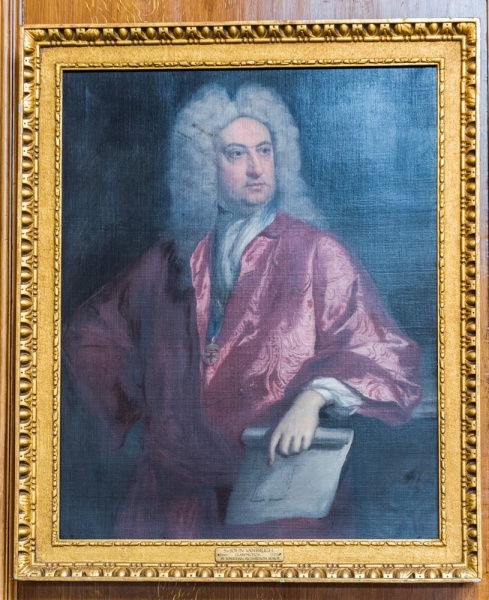 What is a family coat of arms?

If you can establish a direct male line of descent from an ancestor whose arms are registered with the College of Arms then you are entitled to bear those arms.

There is an exception to the above regulations; the College may, with the Earl Marshal's consent, grant coats of arms to people whose life or work has proved to be a benefit to society. Arms may also be granted to corporations, local authorities, and professional associations.

The Kings of Arms authority includes all foreign countries over which the monarch reigns, with the exception of Scotland and Canada. The Lord Lyon King of Arms has jurisdiction in Scotland and the Chief Herald of Canada oversees that country. 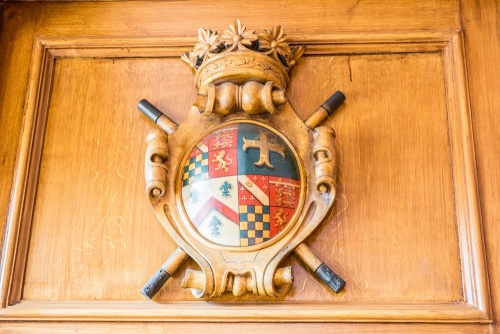 The College has separate arrangements for US citizens. The history of the College's relationship with the US goes back to 1586 when it granted arms to the colony of settlers at Roanoke Island in North Carolina. Many later colonists were granted arms or had their right to arms verified by the College. One of these early 'armigers' was George Washington, the first US President, whose English ancestors bore arms incorporating both stars and stripes, both of which were used to create the design of the US flag.

You might think that the War of Independence severed American ties to the College of Arms but you'd be wrong. The US government permits important US citizens with a proven descent from any British subject to bear an honorary coat of arms. American corporations frequently ask the King of Arms to design a coat of arms for them. The College of Arms Foundation Inc. (USA) now acts to support the College's American activities.

What happens when you receive a coat of arms?

Once the College has determined that you have the right to bear arms, a Herald designs each part of the arms with the applicant. The finished design must be carefully checked to ensure that it has never been used before. Once this has happened, artists create a version of the arms on vellum, with distinct colours and gold lettering. 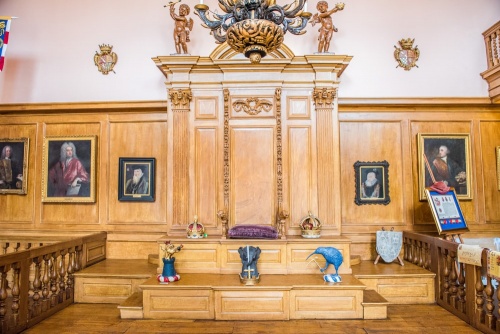 Heraldry is closely linked to genealogy and the Heralds frequently get involved in family history research. Since the end of the medieval period the College has been recording arms and details of family history. The College's archives are the most extensive in Europe and form an invaluable resource for researching family trees. Officers of the College can help trace anyone's family, for a fee to be agreed before research begins.

Visiting the College of Arms

The College is usually open to the public on weekdays throughout the year, with the exception of state and special occasions. When we visited only one room was open; the panelled Earl Marshal's Court, or reception chamber in the central block, which holds portraits of former College officials including Sir John Vanbrugh, architect of Blenheim Palace. There is a display of heraldic items and books on heraldry. The College of Arms is close to Blackfriars and Mansion House tube stations and just a short stroll south of St Paul's Cathedral. 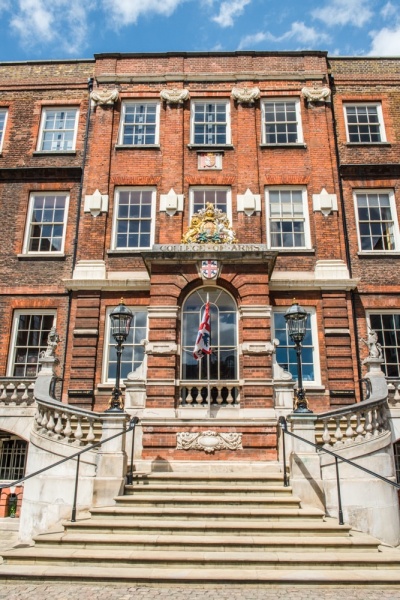 The College of Arms front entrance on Queen Victoria Street

Nearest Accommodation to College of Arms:

More self catering near College of Arms >>

More Hotels near College of Arms >>

More bed and breakfasts near College of Arms >>