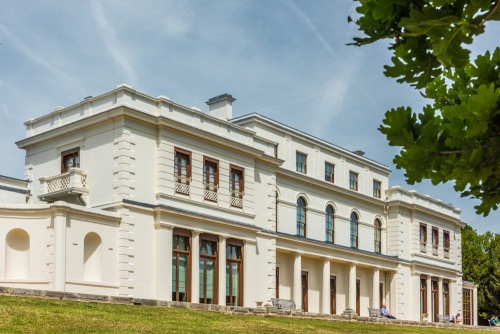 Gunnersbury Park is an opulent stately home in Regency style, once owned by the Rothschild banking family. It now houses a local history museum for the London Boroughs of Ealing and Hounslow. Included in the range of exhibits are archaeological finds from the area, the last Hansom cab to work the borough, and several carriages owned by the Rothschilds themselves.

In 1802 Alexander Copland built a large Regency mansion in neoclassical style in Gunnersbury Park. Copland was a builder and a partner of architect Thomas Holland. The house was built on a low rise overlooking a horseshoe-shaped lake, and sumptuously furnished. It was later known as the Large Mansion, and here's why:

In 1806 Major Alexander Morrison built Gunnersbury House in the northeast corner of the park. Its design echoes the design of Copland's fashionable house, with a long neo-classical front and Oriental motifs. 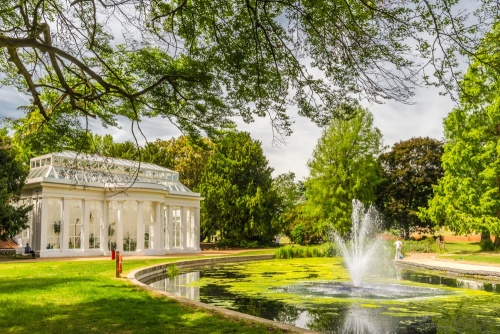 The Orangery and Horseshoe Pond

In 1925 Maria de Rothschild sold the park and mansion houses to Ealing Borough Council and Acton Borough Council for 130,000 pounds on condition that the estate be used for leisure. The estate grounds became a public park, and the Large Mansion was eventually turned into a local history and heritage museum.

The museum opened in 1928 in the Large Mansion of Gunnersbury Park, using the ornate staterooms as a setting to display objects connected with the heritage of Ealing and Hounslow. A series of changing exhibits tell the story of the people and places of the two boroughs from prehistory to the present day. The social history of the area is depicted through artwork, photographs, and objects from everyday life. 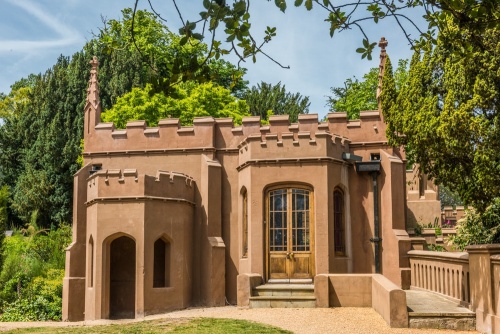 Some of the most popular objects on show include 17th century Hounslow Swords, a pair of early 19th century carriages owned by the Rothschild family, and an 1804 Stanhope printing press.

One unexpected collection is the South Asian Archive, with recordings of South Asian residents of the area telling their stories, plus items of clothing, photographs, and documents showing how South Asians came to Ealing and Hounslow, and how they lived. Recorded interviews cover topics like immigration, race relations, establishing places of worship, work, and local entertainment. It's a slice of living history, and part of the cultural diversity that makes the area what it is today.

The historic mansion itself forms part of the museum exhibits. The Victorian kitchens have been restored to show what life was like for those who worked 'below stairs' during the house's 19th-century heyday. The kitchens include a pastry room, butchery, chef's office, and scullery in addition to the main kitchen area. 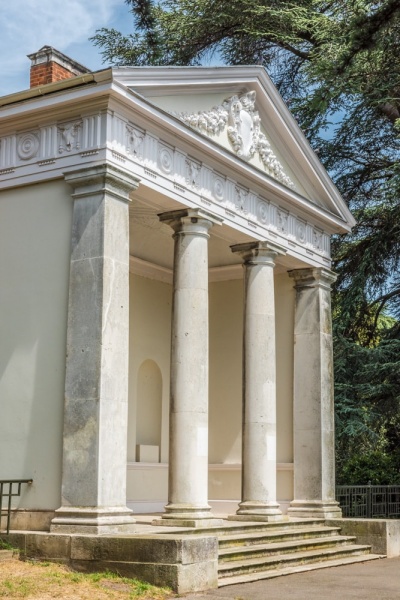 One other historic building in Gunnersbury Park deserves a mention. The Doric Temple, on the edge of the Round Pond, is one of the oldest buildings in the park. It was built in the mid-18th century in the style of a Greek temple, with Doric columns supporting a large portico. It may have been built by the famed garden designer William Kent, who created the informal gardens, including the pond. The Temple has been used as a dwelling, a dairy, a billiard room, and possibly a synagogue.

Another popular feature in the Park is the Orangery, which stands on the edge of Horseshoe Pond looking across the water to a fountain. Beyond the Pond are the overgrown ruins of a Japanese Garden, one of the few parts of the historic gardens that have yet to be fully restored. Near the Japanese Garden is a picturesque bridge and beyond that is a Community Garden, sheltered behind walls designed to look like a Gothic ruin. 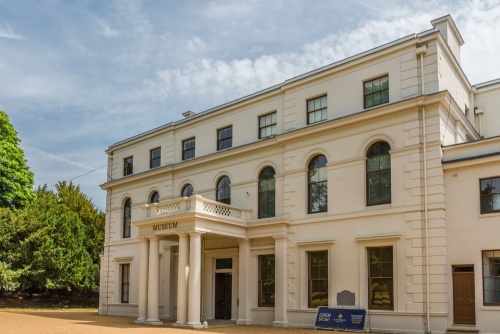 Gunnersbury Park is easy to reach from Acton Town tube station (Picadilly Line). Simply turn left as you exit the station, and follow Gunnersbury Lane to its end, where it joins Gunnersbury Avenue at a set of lights. You can see the park boundary wall just across the road. Cross over, turn left, and you will see park gates immediately ahead. It should take no more than 10 minutes easy walking to reach the Park from the tube station.

As you enter the park you will catch a glimpse of the Small Mansion ahead of you through the trees. The Large Mansion is beyond it. 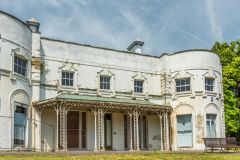 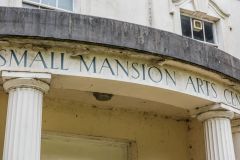 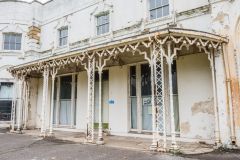 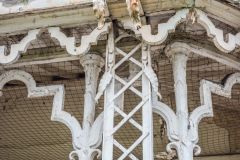 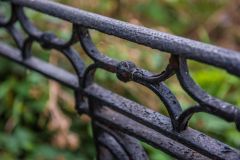 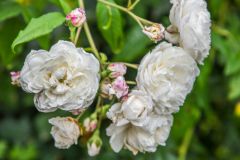 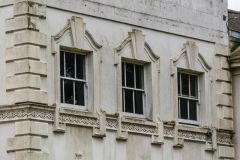 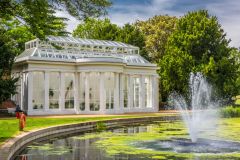 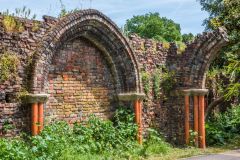 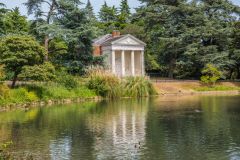