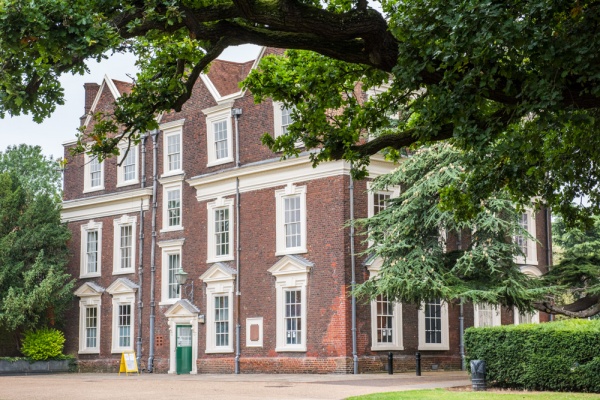 A rare glimpse of the past in modern Brentford, Boston Manor is a fine Jacobean house, created in 1623 for Lady Mary Reade. Lady Reade later married Sir Edward Spencer (see Althorp House). The house is set in lovely parkland and houses a collection of over 80 paintings from the collection of the London Borough of Hounslow. 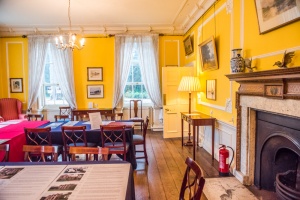 In 1670 a wealthy merchant named James Clitherow bought the manor and refaced the Jacobean house in elegant red brick, turning it into a wonderful example of a Carolean country house. It is clearly influenced by the classical ideas of Inigo Jones, though there is no indication that Jones himself had any hand in the design.

The 17th-century structure is somewhat hidden behind a later Victorian porch, which doesn't do any favours to the ambience. The porch gives way to an entrance hall with a huge decorative screen.

There are several ground floor rooms, including a dining room and library, with a fireplace overmantle in the style of Grinling Gibbons (again, there is no evidence that Gibbons himself performed the carving).

The dining room once hosted royalty; on 23 June 1834 King William IV and Queen Adelaide visited Colonel Clitherow for dinner. The Colonel's sister reported that the king was not in his usual spirits as he had a touch of hay fever! It was exceptionally rare for the royals to dine with a commoner, so this gives some sense of just how important a figure Clitherow was in London society at the time. 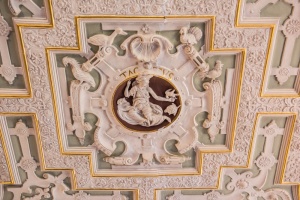 Upstairs on the first floor is a superb state drawing room. The ceiling is original to the 1623 house and features deliciously delicate strapwork in low relief. Unusually, we may actually know the name of the artist; it is thought to be Edward Stanyon, who created a similar ceiling at Blickling Hall in Norfolk.

Classical allusion is everywhere, from the Virtues in the drawing room to Hope in the state bedroom. Another feature is Jacobean wallpaper with imaginary scenes of classical antiquity.

Boston Manor is a remarkable historical survivor in the midst of modern London's western suburbs. It is owned by the Borough of Hounslow and houses displays of historical artwork. The setting is wonderful; as secluded as you are likely to get in Brentford! The manor is open regularly on weekends during the spring and summer months.

The manor is extremely easy to reach from Boston Manor tube station (Picadilly line). Just exit the station and turn right onto Boston Manor Road. The park and manor house is straight ahead, an easy 10-minute walk from the station.

We visited during London's annual Open Heritage Days weekend. We were offered the choice of exploring the house by ourselves or joining a short tour. We opted for the tour, which explained the history of the house, a bit of the architecture, and the Clitherow family. 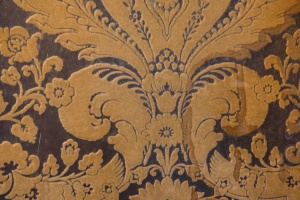 We also listened to a very good talk by a costumed guide about the 1642 Civil War battle of Brentford, when Prince Rupert's Royalist troops almost caught the Parliamentarian defenders of London off-guard and might have brought the war to an abrupt halt had not his men stopped to loot and drink after scattering the Parliamentarians at Brentford.

After the tour, we explored the house on our own. The highlight is the extraordinary state drawing room. The decoration in this large chamber is exceptional, and it is easy to see why it has been called the best example of Jacobean architecture in England. The strapwork decoration on the ceiling is magnificent, with gilded strapwork and classical symbolism.

According to one of the friendly volunteer guides, the gilding may not have been original; modern historians have analysed the ceiling and suggested that it was originally plain white. Be that as it may, the effect is stunning.

As you leave the manor house, take a moment to examine the side of the building. At first glance, it is typical of Jacobean style, with columns of symmetrical windows making a pleasingly balanced facade. But if you look closer you will see that one entire column of windows have been filled in, and the window openings painted on to mirror the other, real windows. Whether this was simply a question of style, or whether the Clitherows were trying to avoid paying the ubiquitous window tax isn't clear.

Boston Manor is a delight to visit. Though only a few of the rooms are open to view, the interior is exceptional and provides a fascinating glimpse into the history of this area of London. Highly recommended.

UPDATE
Boston Manor is closed for major restoration works. The house is expected to reopen in 2021. Please DO NOT make plans to visit until then. We will update this page as soon as reopening details are confirmed. 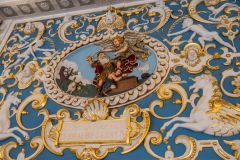 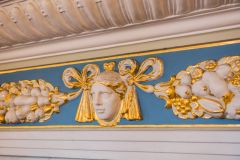 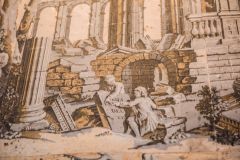 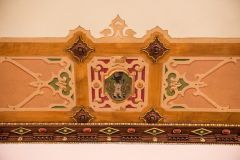 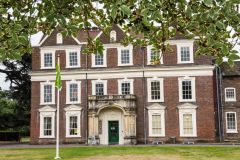