HERITAGE HIGHLIGHTS:   Home of Samuel Johnson while he wrote his Dictionary 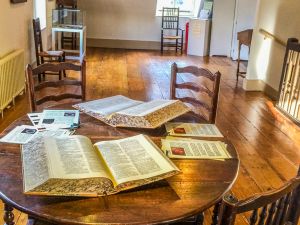 The London home of Samuel Johnson from 1748-1759. It was in this building that Dr Johnson compiled his now famous dictionary of the English language. The house has been restored to the way it would have been during Dr Johnson's residency here, and it remains one of the oldest surviving townhouses in London.

Dr Johnson's House is one of those delicious London surprises that you seem to run across almost by accident, tucked away in a quiet courtyard north of busy Fleet Street yet seemingly hidden from the throngs of tourists that flock the area. The unobtrusive 300-year-old town house was the home of Samuel Johnson, and it was here, in a garret room, that he painstakingly researched and wrote his famous Dictionary.

The house has been restored to how it would have appeared during Johnson's lifetime, with many original features lovingly brought back to life. There is a research library and exhibitions about Johnson, his life, and times.

Johnson was born in Lichfield, Staffordshire, in 1709 the son of a bookseller. From these humble beginnings, he rose to become one of the leading literary figures of his age. But life was not always kind to Johnson; as a baby he suffered from scrofula, which left him disfigured with scars and suffering from poor eyesight and partial deafness.

He attended Oxford University but had to quit as his parents could not afford to keep him there. He started a school, but it failed, and so he left Lichfield and walked to London, to seek his fortune. There he worked as a writer for Gentleman's Magazine and had minor success publishing his poetry and a biography of the poet Richard Savage. 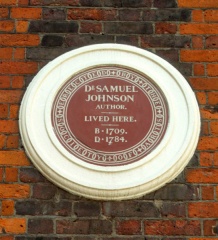 Johnson's big break came in 1746 when he was commissioned to write A Dictionary of the English Language. It was at this point that he moved to these premises in Gough Square. For the next 9 years, Johnson worked on the dictionary, which was published in 1755. The first edition ran to just 2000 copies, and 2 of these are held at Dr Johnson's House.

The book was a huge success, and Johnson became one of the most celebrated men in London society, known for his sparkling conversation and sharp wit. He is generally acknowledged to be the second-most quoted writer in the English language, after Shakespeare. His most famous quip is '... when a man is tired of London, he is tired of life’.

Though he continued to produce original works, including literary critiques, biographies, and essays, he was universally known as 'Dictionary Johnson', and it is for this single work that he is best remembered today. 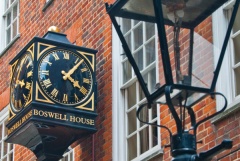 In 1762 Johnson received a pension from King George III, and the financial freedom allowed him to travel widely. The most famous account of his travel is arguably 'A Journey to the Western Isles of Scotland', a three-month journey through the Hebrides in company with his friend and biographer James Boswell. Boswell followed Johnson everywhere and meticulously noted down details of his life and conversation. His biography was published in 1791.

17 Gough Square was built in the late 17th century by a wine merchant named Richard Gough. Though the exterior is red brick, the structure is actually timber-framed. Number 17 formed part of a new development of buildings around a courtyard, but it is the only one of the original development to survive. The house is 4 floors in height, with an open staircase. The interiors have wonderful period panelling. A few of Johnson's personal belongings have survived, though most were dispersed after his death. 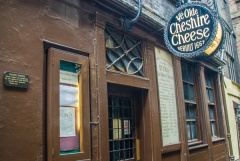 Johnson lived here until 1759, after which it was let to a succession of tenants, served as a hotel and B&B, and was used as a printer studio. The house was threatened with demolition in 1911 when Cecil Harmsworth, an MP, stepped in and restored the property. During WWII the house was a social club for the Auxiliary Fire Service, the 'heroes with grimy faces' who helped deal with the devastation of the Blitz.

The house itself was it several times by bombs, and the garret where Johnson wrote his Dictionary was badly damaged, but the house somehow survived and was restored.

A short distance from the House is Ye Olde Cheshire Cheese inn on Bolt Court, which Johnson knew well. Beside the House is a curator's house, built for the House custodian when Number 17 opened to the public. The Curator's cottage is thought to be the smallest house in the Square Mile of London. 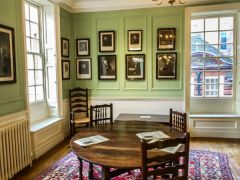 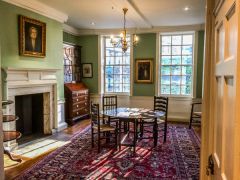 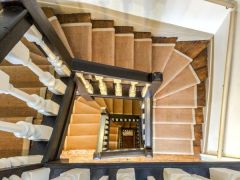 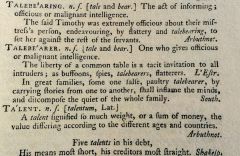