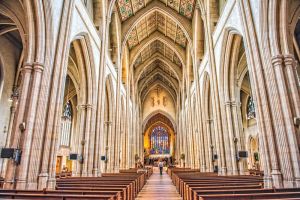 The first Catholic cathedral in the UK since the Reformation, St George's was built in 1846 by prominent Gothic Revival architect AW Pugin, who was also responsible for most of the Houses of Parliament.

In 1820 Father Thomas Doyle came to serve the Catholic community on the south bank of the Thames at St George's chapel on London Road. The St George's and Walworth districts were undergoing a population explosion as the working-class areas were drawing a huge number of Irish Catholic immigrants.

The first Catholic cathedral in the UK since the Reformation, St George's was built in 1846 by prominent Gothic Revival architect AW Pugin, who was also responsible for most of the Houses of Parliament.

Father Doyle soon realised the 18th-century chapel could not hold his growing congregation. He gathered support for a larger Catholic church, and news of the project came to architect AW Pugin, a staunch Catholic. Pugin, immediately drew up plans for a grandiose cathedral complex, complete with a cloisters, chapter house, and conventual buildings.

In a famous episode that summed up Pugin's passion for his work over such mundane questions as economy, a committee member asked how much the ambitious plan would cost to realise, and Pugin immediately rolled up the plans, wished the committee good day, and left the meeting.

Despite the rather rocky relationship between Pugin and the committee, a new version of his plans were approved in 1839. The only site the City of London would agree to sell the Catholic Church was a triangle of land on St George's Road. By a curious twist of fate, the location of the new church was very close to the site of the anti-Catholic Gordon Riots in 1770. In fact, the high altar is said to be placed on the exact spot where the Gordon Riots began, though this seems unlikely. 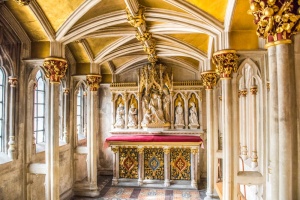 The Knill Chantry, by Edward Pugin, 1857

Anti-Catholic feeling in England was still running high at the time, and there were severe restrictions on the sale; Pugin's design had to be executed with no "ecclesiastical Ornament" on the exterior. To avoid a public scene, the foundation stone was laid at 7 am, 26th May 1841, in a private ceremony. The church opened in 1848.

The very first marriage ceremony to take place at St George's church was that of AW Pugin himself. On 10 August 1848 Pugin married his 3rd wife Jane Knill.

In 1850 St George's was raised to cathedral status, becoming the first Catholic cathedral in England since the 16th century Reformation.

The church was built to hold 3000 people and stands 240 feet long and 72 feet wide. The interior was an excellent example of the Victorian Gothic style, ornately decorated, with exceptional attention to craftsmanship. In 1849 a chantry was added for Edward Petre, and another to George Talbot was begun in 1854 It was never finished, for Talbot's relative, the Earl of Shrewsbury, who was a major patron of the church, died before it could be finished. On 1857 Edward Pugin, son of AW Pugin, added the Knill Chantry for Stuart Knill, later Sir Stuart Knill and a Lord Mayor of London in 1892.

Unfortunately, Pugin's church was badly damaged in 1941 when German bombs left the church a roofless shell. The building was rebuilt by architect Romilly B. Craze, who managed to retain much of Pugin's Gothic Revival work. The best surviving feature of Pugin's original design is the Blessed Sacrament Chapel, fronted by exquisitely detailed wrought-iron gates. 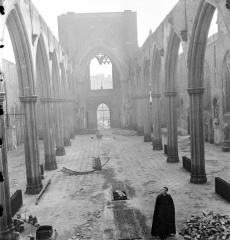 The interior of the cathedral after
the WWII bombing

The Petre Chapel also remains. This exceptional Gothic chantry was designed by Pugin, who oversaw every detail of the construction. The church guide calls the Petre Chapel a 'Gothic gem', it is thought to be the very first chantry to be built since the Reformation.

Despite the devastation of the WWII bombs, so much of Pugin's Victorian vision has survived, including extremely good stained glass windows by the Hardman company. One unexpected survivor is the stone frontispiece of the high altar. The frontispiece, crafted from Caen stone, was found in the rubble of the bombed church. Though damaged, it is a reminder of the superlative craftsmanship and detail demanded by Pugin in the original church design.

At the west end of the south aisle is a large bronze crucifix of unknown date. The crucifix is in the style of Michelangelo, though there is no certainty that it was by the famous Renaissance sculptor or his circle. The crucifix was discovered in Napoleon's chateau at Malmaison, near Paris. It was brought to Southwark by the Emperor of Austria.

Also in the south aisle is a striking memorial to Archbishop Oscar Romero, assassinated in San Salvador in 1980. The memorial is in the form of a large cross painted with Central American designs. Set into the cross is the crucifix worn by Romero on the day he was killed.

The Knill Chantry, designed in 1857 by Edward Pugin on behalf of Stuart Knill. Both Knill and his son Sir John became Lord Mayors of London. Stuart's cousin Jane was AW Pugin's third wife.

In the north aisle is a memorial to Father Doyle, founder of the Cathedral. The memorial was designed by Farmer & Brindley and shows an effigy of Doyle lying with his feet resting on a dragon.

Father Doyle's memorial stands beside the shrine of St Frances Cabrini, the patron saint of migrants and the first canonised saint from the USA. 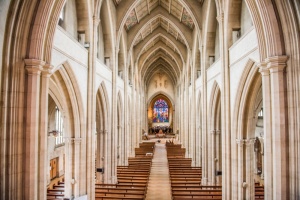 The view from the west gallery

The cathedral is technically The Metropolitan Cathedral Church of St George but is commonly called St George's Cathedral, Southwark.

The cathedral is usually open daily to visitors of all faiths. I came on a dull, overcast day in September, and walked into the cathedral just as a choir was beginning to rehearse. The sound of the choir voices raised in harmony swelled in the cathedral interior. It was a simply incredible experience to hear the beautiful singing in such a magnificent building.

I was very fortunate to chat with a seminarian who had begun working at the cathedral and he invited me to climb the spiral stairs to the west gallery for a look down the length of the nave to the choir and high altar. The view really emphasises the superb architecture of Pugin's design, with slender columns seeming to lift effortlessly up towards the ceiling high above.

It is fascinating to compare Southwark Catholic Cathedral with the other great Catholic church in London, Westminster Cathedral, which is richly coloured, and very much continental, even Byzantine, in style. By contrast, Southwark Cathedral is very, very British, a beautiful expression of Victorian Gothic design, sparsely decorated by comparison, but every bit as effective.

Note: Do not mistake this church for the much older Anglican Southwark Cathedral, located on the South Bank near London Bridge. 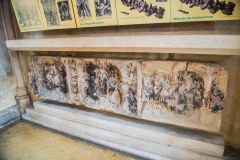 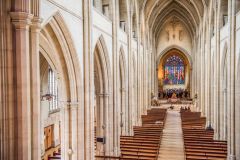