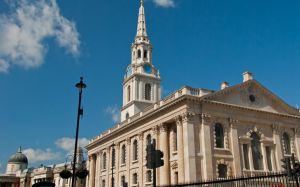 This iconic London landmark traces its history back to at least the early 13th century. Our first record of a church here comes from 1222 when the Bishop of London and the Abbot of Westminster squabbled over who had rights over the church. The case was heard by the Archbishop of Canterbury, who sided with the monks of Westminster, and from that date the abbey made regular use of St Martins.

The name may seem odd to modern visitors, but in the early medieval period the area around Trafalgar Square was indeed nothing but farm fields, so St Martins was quite literally 'in-the-fields'.

Over the ensuing centuries, London slowly expanded, and the area around the church became part of the great city sprawl. In 1542 Henry VIII rebuilt the medieval church and extended its parish. He was not moved by altruism but wanted to stop plague victims being carried through the grounds of St James Palace. Henry's church was enlarged again in 1607 by Prince Henry, son of James I. The church survived the Great Fire of London, but in 1721 it was pulled down to make way for the elegant neoclassical building we see today.

The architect was James Gibbs, perhaps most well known for the Radcliffe Library in Oxford. Gibbs created a masterpiece, blending English Baroque and Palladian design to create a building that served almost as a template for churches and civic buildings for generations, both in Britain and abroad, particularly in the US.

One of the most influential vicars of St Martins was Dick Sheppard, vicar during World War One. Sheppard used the church to offer a haven for soldiers travelling to the conflict in France. His vision of St Martins as ‘the church of the ever open door’ became a lasting philosophy. It is so refreshing to visit St Martins and find the doors open wide, inviting one and all to find refuge from the business of Trafalgar Square outside.

The interior is elegant simplicity, with beautiful plasterwork ceilings supported on slender classical columns. Both aisles are lined with galleries, and brass chandeliers add light to the already spacious interior. In the crypt is a popular cafe, but even if you are not hungry it is well worth descending the stairs to take in the beautiful stone and brick vaulting.

St Martin-in-the-Fields is one of the most beautiful classical churches in London, a wonderful example of 18th-century architecture. And you can't beat the location!

More self catering near St Martin-in-the-Fields >>