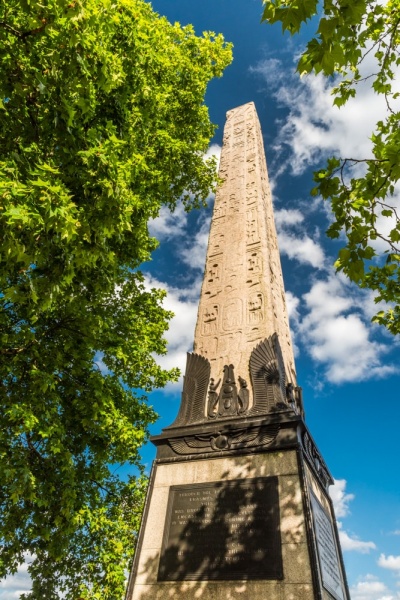 Cleopatra's Needle
Cleopatra's Needle is an authentic Egyptian obelisk brought to London from Heliopolis, Alexandria, and erected on Victoria Embankment in 1878. The obelisk is one of a pair, the other being erected in Paris. Unlike many Egyptian treasures that found their way to England, Cleopatra's Needle was not removed from Egypt by British nobility, but rather it was granted to the UK government by Muhammad Ali, ruler of Egypt and Sudan, in 1819, to commemorate British victories at the Battle of the Nile and the Battle of Alexandria. 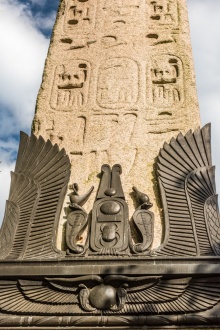 The ornate base of the Needle

Though the British government accepted the gift of the obelisk, it did not want to pay the considerable expense of transporting the monument to Britain. So there the Needle lay, buried in the sand.

The Turkish rulers of Egypt periodically offered it to the British government, who declined the honour each time. They briefly considered bringing it to London to mark the Great Exhibition of 1851 but decided against the notion because of the cost.

In 1867 the land where the obelisk lay was purchased by a Greek merchant. The merchant threatened to break up the monument, but once more the government refused to act. In desperation, Sir William Wilson paid £10,000 of his own money to transport Cleopatra's Needle to England.

That journey to Britain is perhaps as interesting as the Needle itself; the obelisk was encased in a specially built tubular cage, with a rudder and keel, sail, and wheel, manned by a captain and five crewmen, and towed like a pontoon behind a ship called Olga. The peculiar cylinder looked like an elongated cigar or a very early precursor of a submarine. The cylinder was given the name Cleopatra as if it were an ordinary ship.

The voyage was beset by storms in the Bay of Biscay, and the Needle had to be cut adrift from the Olga for safety. Eight crewmembers were clinging to the Cleopatra's superstructure, so the Olga lowered a lifeboat to rescue them. Tragically, the lifeboat was sunk in the heavy seas and six sailors lost their lives. 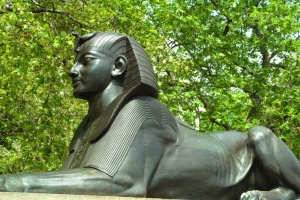 A stylised Egyptian sphinx at the
base of the Needle

The Cleopatra was eventually rescued by a merchant vessel, and towed into a Spanish port. Three months later, in early 1878, it finally made the last leg of its journey to England.

In the meantime, the government was having to decide where to erect the Needle. A site in Parliament Square was mooted, and a trial model of the obelisk was erected, but the site was rejected. A new site was proposed in Embankment Gardens, but District Railway officials complained that the heavy column might crash through onto trains running beneath the gardens. All this while the obelisk was the subject of public ridicule; it was called 'fatally suggestive of a factory chimney'.

Finally, a place was found on Victoria Embankment. On 12 September 1878 Cleopatra's Needle was raised on a timber scaffold by hydraulic jacks, then tipped into place.

What is Cleopatra's Needle?

Cleopatra's Needle is a granite obelisk standing approximately 68 feet high and weighing 180 tons. It was made around 1450 BCE by order of Pharoah Tutmos III, from stone quarried near Aswan.

Hieroglyphic symbols commemorating military victories were added to the column two centuries later by Ramses II. The Romans moved the obelisk to Alexandria around 12 BCE. At some point the needle fell or was intentionally toppled, and lay, protected by the surrounding sand, for centuries. 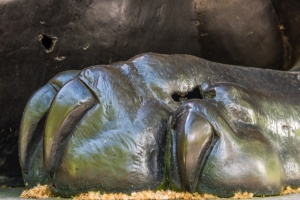 It should be noted that the Needle has nothing to do with Cleopatra; it was as much as 1400 years old before Cleopatra was born.

The Needle is flanked by a pair of stylized statues of Egyptian lions, or sphinxes. These are Victorian additions and have no actual connection to the obelisk. Curiously, the lions originally faced outwards, away from the Needle, as if protecting it. They were later turned inwards, towards the Needle, by a contractor's error. The error was never rectified and the sphinxes still face the wrong way today.

The Needle's pedestal bears a plaque that reads:

This obelisk
Prostrate for centuries
on the sands of Alexandria
was presented to the
British nation A.D. 1819 by
Mahommed Ali Viceroy of Egypt
A worthy memorial of
our distinguished countrymen
Nelson and Abercromby

Another plaque commemorates the six sailors who lost their lives in the Bay of Biscay while transporting Cleopatra's Needle to England. The plaque reads: 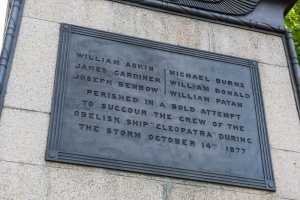 When the Needle was erected a time capsule was set beneath it. In this were placed items symbolic of the British way of life. The contents of the time capsule make a fascinating statement about Victorian attitudes, for the chosen items include a gentleman's lounge suit, a selection of illustrated newspapers including that day's issue of The Times, Bradshaw's Railway Guide, Queen Victoria's portrait, a complete set of ladies dress and toiletries, Bibles, children's toys, a set of coins, a razor, and, to cap it all off, pictures of the most beautiful women in the realm.

A popular piece of doggerel describes the public's attitude towards Cleopatra's Needle:

On 4 September 1917 German aircraft made their first bombing raid on London. Several bombs fell in the roadway beside Cleopatra's Needle. You can see the scars left by the bombs on the sphinx bases, the obelisk's pedestal, and the right-hand sphinx. For example, you can easily see holes made by the bombs in the sphinx's left rear paw.

More self catering near Cleopatra's Needle >>