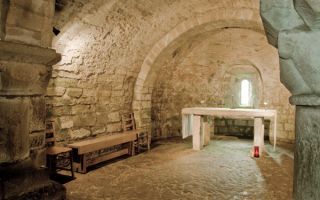 Lastingham
Lastingham is a lovely little village on the southern edge of the North York Moors near Kirkbymoorside. The parish church of St Mary has a superb early Norman crypt containing the grave of St Cedd. The crypt is a church in miniature, with aisles, a stone altar, chancel, and wonderful vaulted roof supported on thick, circular columns. If you enjoy Romanesque architecture, Lastingham is a 'must-see'.

As for the village itself, its major attraction is simply the wonderful setting, with rolling green hills that blend into the North York Moors to the north. The village was mentioned in the Domesday Book when the monastery held 2 carucates of land here.

There are several historic building, including the post office, which dates to the 17th century, and the inn, which bears an inscription over the door reading 'John Page, 1776'.

To the south-west is Spaunton Forest, granted in 1086 by Henry II to the monks of St Mary's Abbey in York. The abbey retained ownership of the forest throughout the medieval period, but in 1549 Edward VI granted the manor to William, Lord Grey of Wilton.

More self catering near Lastingham >>

More bed and breakfasts near Lastingham >>