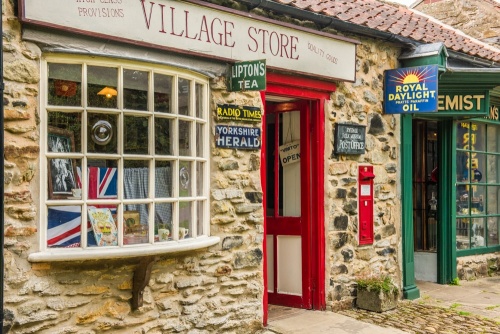 Step back in time at this exceptional outdoor living history museum in the heart of beautiful Ryedale, in the North York Moors village of Hutton-le-Hole. The Ryedale Folk Museum features a wealth of historic buildings, big and small, that were saved from demolition and re-erected here.

The range of historical buildings is remarkable, and they serve as a setting for a vast collection of historical objects representing thousands of years of life in the North York Moors.

There are so many historic buildings at the Ryedale Folk Museum, from rustic thatched cottages to village shops, craftsmen's workshops to farm buildings. Here are a few of the highlight buildings that caught our eyes: 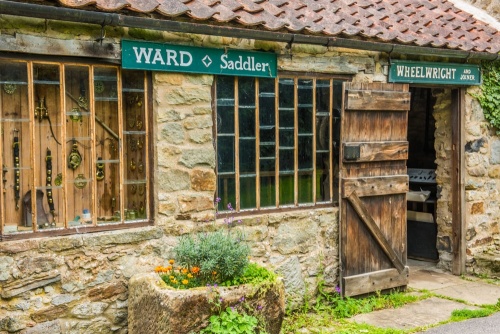 The saddler and wheelwright's shop

This cruck-framed thatched building was built in the 17th century in Danby, on the northern edge of the North York Moors. It has been restored to show what life was like for a simple farming family. The house is divided into four sections; a dairy, a bedroom, a kitchen, and a dining area. The building was used as a setting for the BBC feature 'Death Comes to Pemberley'. 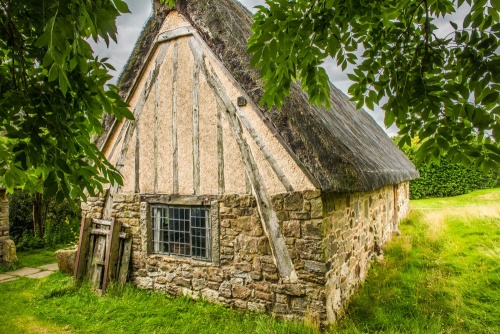 Perhaps the most impressive historic building in the museum, this cruck-framed building was erected in the late 16th century in Harome village. It was rebuilt at the Ryedale Folk Museum in 1971. The scale of the structure is remarkable considering it uses simple construction techniques with no nails, and timbers had to be raised into place by hand. 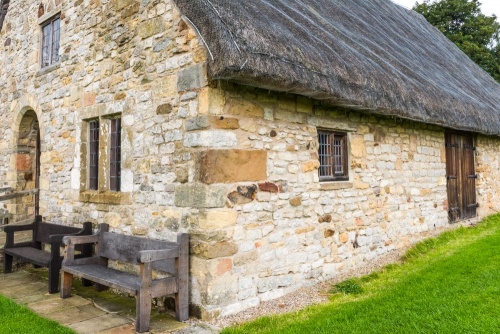 One of the few historical buildings in the museum that is a reconstruction rather than a reassembling of an existing building. The roundhouse show how a typical Iron Age family in the North York Moors lived. The roundhouse has a central fireplace, allowing smoke to rise through the peak of the roof. Against the circular walls are beds, while the remaining space is filled with weaving looms and basic utensils like a quern stone for grinding grain. 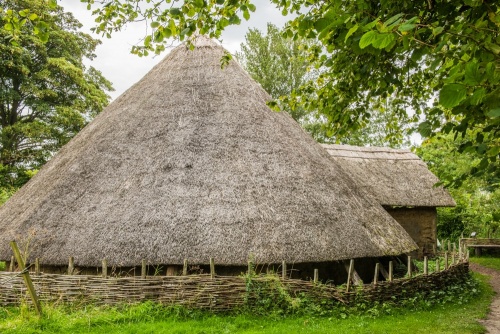 This large timber-framed thatched building shows how a typical crofting family lived between the 13th and the 16th centuries. Crofting families lived at one end of the building and their animals were housed at the other. 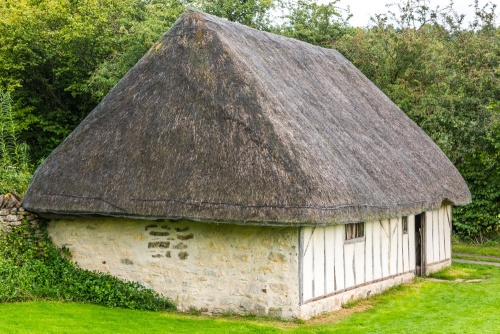 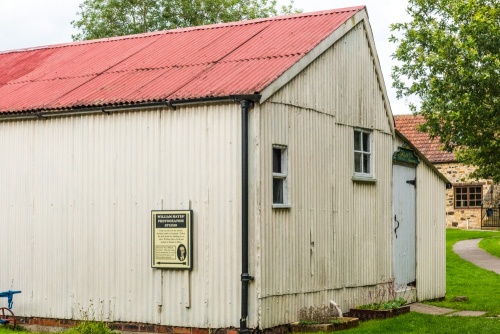 Another cruck-framed building, this thatched cottage stood in the village of Harome. It has been restored to the way it would have looked in the Victorian period, with a parlour, bedroom, and kitchen. The kitchen is not just a museum setting; the range works, and is used to bake scrumptious snacks on special event days. In front of the whitewashed building is a small cottage garden. 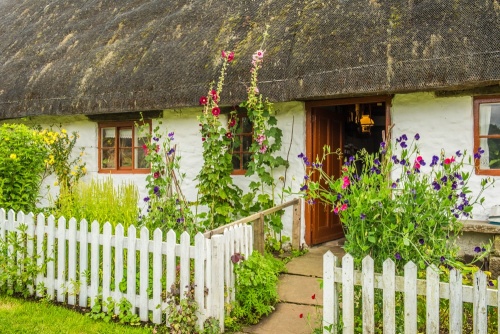 Over 60 years the brothers Richard and Edward Harrison amassed a huge collection of antiques and curiosities covering five centuries of British history. A special exhibition building holds about half of the objects in the collection.

And what a range of oddities they are! Here you can see everything from medieval implements for brain surgery to kitchen pots and pans. See a heart-burial urn made for John Peck, who died in 1562. Peck was a knight of the Hospitaller Order and the urn preserved his heart after his death. It is decorated with the Maltese cross, the symbol of the Hospitallers, who were the forerunners of the St Johns Ambulance service. 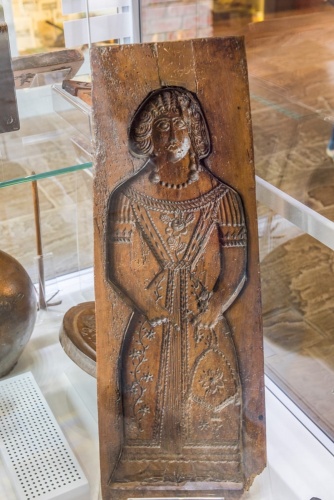 16th-century carving in the
Harrison Collection

In the Elizabethan period, glass was expensive and difficult to manufacture. The government exercised tight control over who could make glass by issuing a special license. Not many of these licenses were issued, so enterprising craftsmen in Ryedale set up an illegal kiln, far from prying eyes.

The museum features a reconstruction of this illegal glass furnace, made by burning timber to create a 1200 degree C temperature to heat crucibles formed by four large arches. The crucibles were filled with silica, lime, and alkali which were heated to a molten state then picked up on the end of long pipes where they were shaped by blowing.

The Ryedale glass makes created beautiful objects such as bottles, jugs, and glasses. These objects would have to be sold in secret, to avoid the strong penalties for illegal manufacturing. 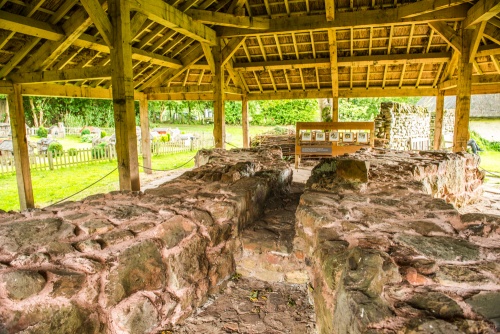 Aside from the collection of historic buildings, the museum is home to a large collection of horse-drawn vehicles including carriages, ploughs, a hearse, and a fire engine.

Each year the Museum is home to a variety of farm animals from Temple Newsam Farm near Leeds. The variety of animals changes every year but there are always rare breeds and older animals. Visitors are welcome to help feed chickens and pigs.

There is also a free art gallery featuring temporary exhibitions of works by local artists or by artists whose works focus on the Ryedale area.

The Ryedale Folk Museum is located on Main Street, the main road through Hutton-le-Hole. There is no dedicated parking area but there is a pay and display car park on Moor Lane, a 300m walk away. There is often space at the Crown Inn, outside the museum entrance (a charge applies if you're not eating at the Inn). 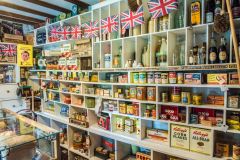 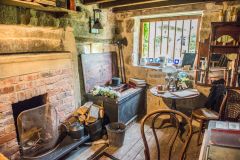 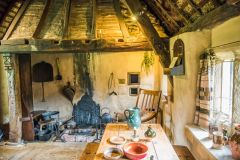 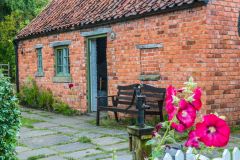 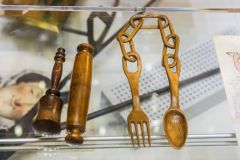 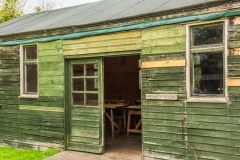 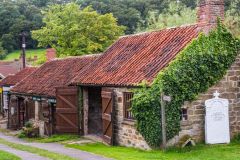