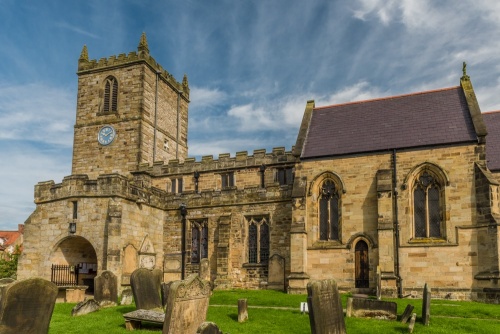 The attractive Yorkshire market town of Kirkbymoorside takes its name from its parish church, dedicated to All Saints. The town name means 'the church at the head of the moors', which describes the location perfectly.

The first record of a church comes from the 10th century, but there was almost certainly a church here at least 200 years before that when a timber church was built on the site of a pagan temple. That timber building was destroyed in a Viking raid. The church was mentioned in the Domesday Book of 1086, but the present building was built around 1250, with additions throughout the medieval period.

The nave and aisle arcades are the earliest parts of the building, both built in the 13th century. The aisles and porch date to around 1450. The porch has a parvise, or priest's room over the arch, accessed by a staircase beside the south door. 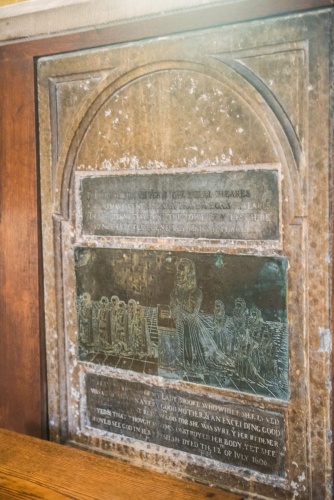 The tower was rebuilt in the Georgian period and the whole church was restored in 1874 by Sir George Gilbert Scott. There are two surviving Norman windows, easily identified by their deep splays. They hold very good Victorian glass, with one of the panels depicting the original medieval church.

The nave and aisle roofs all date to the 15th century. They feature bosses carved with the Neville family arms. In the south wall of the chancel is a 14th-century sedilia. Flanking the chancel are a vestry and Lady Chapel, both added during the 19th-century restoration.

The Lady Chapel features a Jacobean (17th century) reredos. Between the Chapel and the chancel are the richly carved pulpit and screen added by Scott in the 19th century. The chancel screen dates to 1919 and was designed by Scott's pupil Temple Moore as a war memorial. Moore added the cross in 1920. 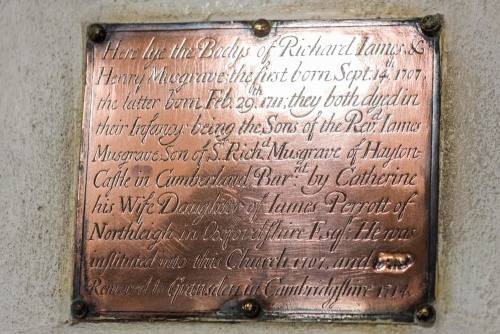 Set into the south chancel wall is a 17th-century memorial brass to Lady Brooke (d 1600). Also on the wall is a small brass to two infant sons of the Musgrave family. Richard Musgrave died in 1707 and his brother Henry in 1711. They were the children of Sir Richard Musgrave and his wife Catherine of Hayton Castle in Cumberland.

Also on the wall is a single tablet commemorating 16 members of the Atkinson family. The earliest died in 1748 and the latest in 1826. All died in the UK except for John Atkinson, who died in Vermont, USA in 1823.

Nearby are memorial to two 19th century rectors of Kirkbymoorside, Rev Joseph Smythe (d 1826) and Rev John Rowlandson (d 1856). Rowlandson had an interesting career; he served as the chaplain to the Honourable East India Company (HEIC) and then as the Bishop of Madras. 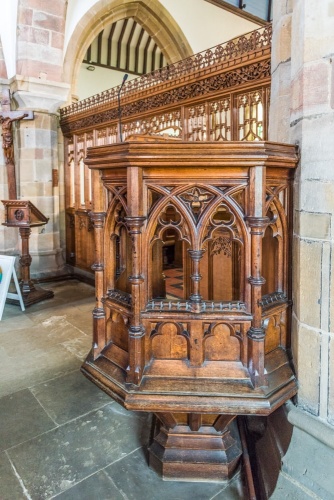 Perhaps a less exalted burial here was that of Penn Curzon Sherbrooke, who for 17 years served as Master of the Sinnington Hounds before his death in 1915.

The octagonal font bowl is decorated with heraldic shields and lozenge shapes.

All Saints Church is on Church Street, just off Market Place, north of Howe End. It is relatively easy to find parking along nearby streets. The church was open when we visited. 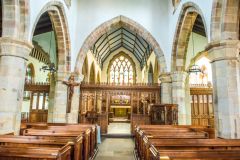 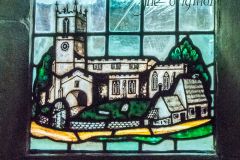 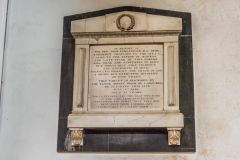 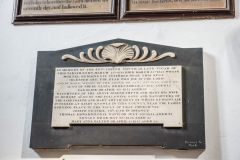 More self catering near Kirkbymoorside, All Saints Church

More bed and breakfasts near Kirkbymoorside, All Saints Church

Self Catering near Kirkbymoorside