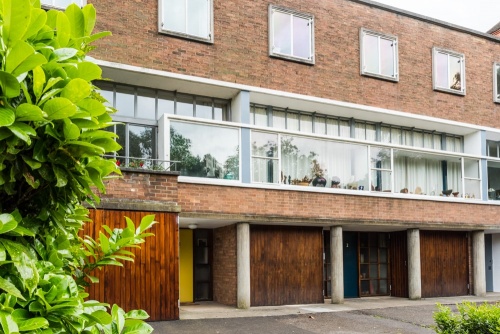 The house at 2 Willow Road in the London suburb of Hampstead is one of Britain's most important examples of Modernist architecture. It is the former home of architect Erno Goldfinger, and was designed and built by him in 1939. The house is also filled with furniture designed by Goldfinger. The art collection includes a number of significant 20th-century works by Bridget Riley, Max Ernst and Henry Moore among others.

Erno Goldfinger (1902-1987) was an influential architect in the British modernist movement. Born in Hungary, and educated in Vienna, Switzerland, and Paris, he worked under Auguste Perret, a pioneer in the use of undecorated reinforced concrete in buildings. In 1932 Goldfinger married Ursula Blackwell, whose parents owned part of the wealthy Crosse & Blackwell food company.

The Goldfingers came to London in 1934, where Erno's austere designs drew praise, but also courted controversy. Though his architectural schemes at Elephant & Castle and Poplar eventually brought him national attention, it was arguably his design for his own house here in Hampstead that really made Goldfinger's mark. 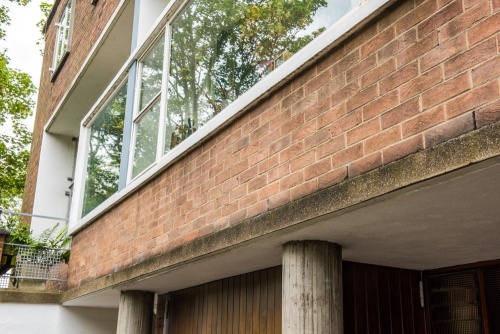 But it was not, initially, a positive mark. The terrace of three houses, his own among them, were so unpopular among inhabitants of Hampstead that, it is rumoured, Ian Fleming chose the name Goldfinger for one of his most famous James Bond villains based on the negative public attitude towards the architect. Goldfinger was not pleased by the notoriety that Fleming's work brought him.

The house design was intended to act as a counterpoint to nearby Georgian houses which Goldfinger admired. The interiors of 2 Willow Road are lined with oak finished with highly polished wax, and are full of meticulous, carefully designed details.

For example, door knobs and light switches are placed at waist level, and the steps that make up the main spiral stair are graduated in height rather than set at a standard distance apart. The overall effect is airy, simple, and elegant.

Goldfinger was not a prototypical aloof architect; in one famous episode, he and his wife lived for two months in a block of flats he had designed at Poplar council flats on Rowlett Street. There the couple entertained tenants and gleaned exactly what they liked and did not like about the flats.

Armed with this feedback, his next major project at Trellick Tower, in west London, was designed with that feedback in mind. He also designed an office into the Trellick flats, where he worked for the last years of his career.

Like many of his projects, Trellick was controversial, but then, controversy was never far away when Goldfinger designed his buildings. He seemed to think that if he was not raising people's ire, he wasn't pushing the boundaries of his capabilities. And he did push; Goldfinger was notoriously difficult to work with, and though he could be charming in his private life, he was brusque and overpowering dealing with his underlings.

Though the rebuilding of post-war Britain ought to have offered Goldfinger an opportunity to design large civic projects, his style of austere buildings did not gain any real measure of popularity. His most important project was a mixed commercial and residential complex at Elephant and Castle, which drew praise from other architects but was panned by the public.

His work was publicly reviled as the epitome of soulless modernity, devoid of warmth. Yet today, many of his designs, including 2 Willow Road, are seen as some of the most important contributions towards modern architecture in 20th-century London. 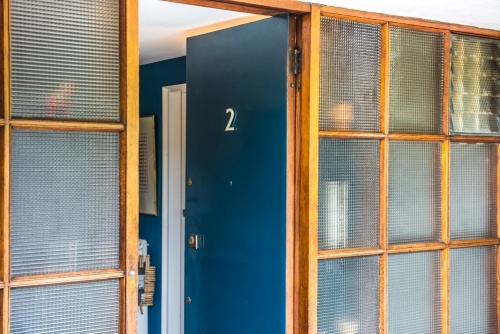 The interior is small, so a timed ticket entry system is usually in operation. When we visited we just missed a guided tour, so we had to wait 45 minutes or so for the next admission. However, the location is wonderful, close to Hampstead village centre, yet secluded, and facing a belt of green trees and park. Your visiting experience begins with a short film about Goldfinger and his life.

The tour was excellent; entertaining and informative - and short enough that younger visitors won't have time to get bored. Unfortunately, unlike most other National Trust properties, photography was not allowed, so we can't show photos of the house interior.

That's a real shame, because though the house exterior is interesting, it is the interior treatment of space that really makes a visit so interesting. The house is surprisingly light and airy, and full of fascinating architectural design details. I came away with a new appreciation for Modernist architecture and the way it has influenced our modern towns and cities.

A short walk from 2 Willow Road takes you to 17th-century Fenton House, another National Trust property, and a printed walk pamphlet is available covering the historic highlights of Hampstead village. The house is also extremely close to Keats House, home of poet John Keats, and it is just a few minutes stroll to Hampstead Heath.

The closest tube station is Hampstead, on the Northern Line, which is about 1/2 mile away, and Hampstead Heath rail station is roughly 1/4 mile distant.. 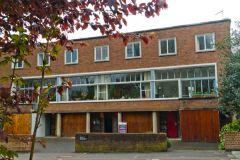 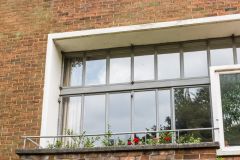 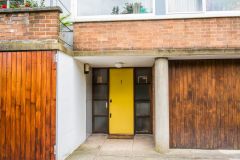 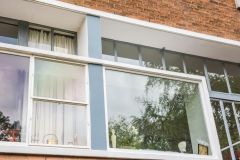 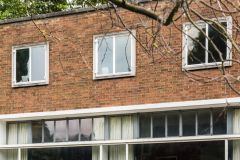 More self catering near 2 Willow Road >>