HERITAGE HIGHLIGHTS:   A neo-classical gem, on the site of a Tudor palace. 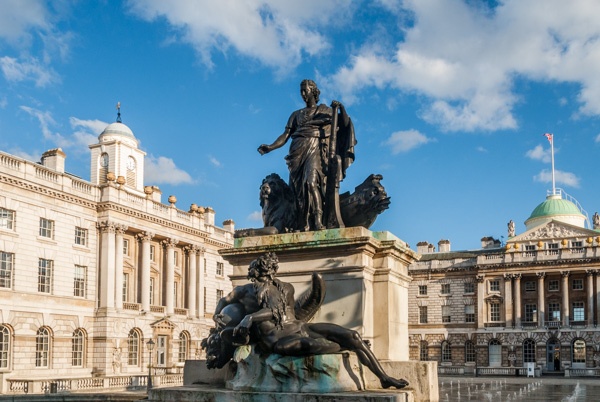 After Somerset's demise in 1552, the house belonged to Princess (later Queen) Elizabeth. It was from Somerset House that Elizabeth rode to welcome her sister Mary on the latter's accession to the throne. After Elizabeth herself came to the throne she gave part of Somerset House to Edward Seymour, son of the Lord Protector, and kept part of it for her own use, and as grace and favour apartments for crown retainers.

The house was given to Anne of Denmark in 1603, and it was used for theatrical performances, including masques by Ben Jonson and Inigo Jones. The latter had an apartment at Somerset House. Anne of Denmark lay in state at Somerset House (by then renamed Denmark House) after her death in 1619. James I also lay in state at Denmark House after his death in 1625.

Charles I gave the property to Queen Henrietta Maria, and it stayed in royal hands until 1645, when Parliament took control, and the name reverted to Somerset House. Inigo Jones died at Somerset House during the era of Parliamentary control, and in 1658 Oliver Cromwell lay in state here.

Somerset House was restored in 1660 for Henrietta Maria but was later used extensively by Catherine of Braganza, Charles II's queen. Sometime during this period, Somerset House became the first building in England to use parquet flooring. From 1693 it was used primarily for grace and favour apartments. 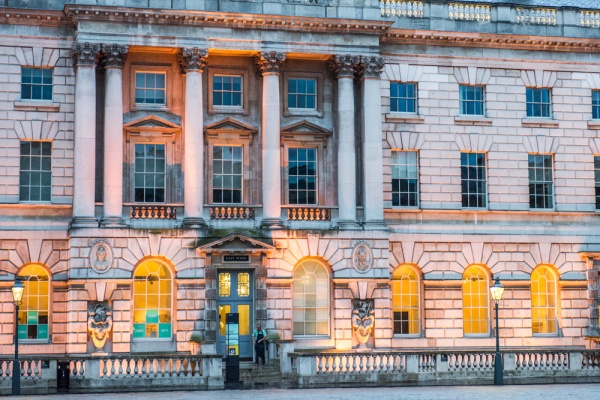 In 1775 Somerset House was demolished and a new building erected, designed by William Chambers, the Surveyor General. Chambers created a grand building in neo-classical style, arranged around a central courtyard, with a separate north wing. In 1788 a statue of George III was built to act as a focal point for the courtyard.

The Thames came right up to the foot of the south terrace (this was before the Embankment was built). In 1835 Chambers' design was extended with the addition of an east wing designed by Robert Smirke.

Somerset House has been the home of several of Britain's most prestigious organizations over the years, including the Royal Society, the Society of Antiquities, Royal Navy, and Inland Revenue. But the body most often associated with Somerset House is the General Register of Births, Deaths, and Marriages, which occupied the north wing for over a century until 1973.

Now, Somerset House is a multi-purpose venue, with offices, cafes, art galleries, a seasonal ice rink, and a museum. The Courtauld Institute of Art moved here in 1990, and the associated Courtauld Gallery eight years later. The Gilbert Collection of silver, gold, and mosaics has been housed in Somerset House since 2000.

Visiting Somerset House is quite an experience; the neo-classical architecture is quite spectacular, and the view from the riverside terrace is superb.

It is completely free to enter the building, but there is a charge for the Courtauld Gallery. The gallery entrance is on Strand, but the rest of Somerset House can be entered either from Strand or from Embankment.

Highlights of the building interior include two very striking historic sets of stairs. 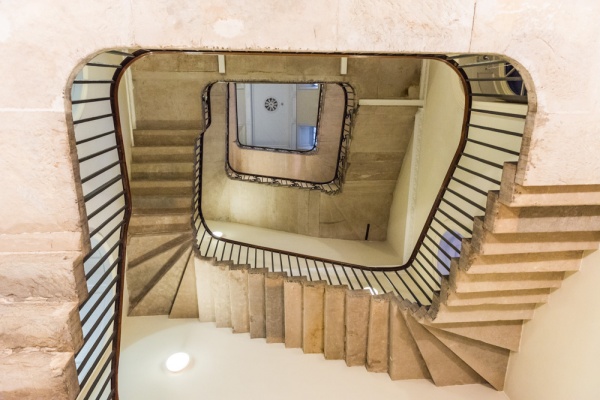 This unusual staircase gave access to the Stamp Office, based in Somerset House from 1789. The Stamp Office was responsible for 'stamping', or marking official documents to show that the correct tax, or 'stamp duty' had been paid. One historical oddity is that until 1855 every newspaper sold in Britain had to be physically brought to Somerset House to be stamped, one at a time. From 1855 the tax on newspapers was removed, which must have been a huge relief to publishers on Fleet Street.

As technology developed the stamping of documents became [somewhat] automated. By the late Victorian period, there were noisy stamping machines and presses in operation, and together they made so much noise that they could be heard by pedestrians on Embankment. In 1834 the Stamp Office was merged with the Tax Ofice, and in 1849 Inland Revenue was formed to take over both roles. Homebuyers in the UK will be familiar with the 'stamp duty' payable on house sales, a reminder of the role once played by the Stamp Office. 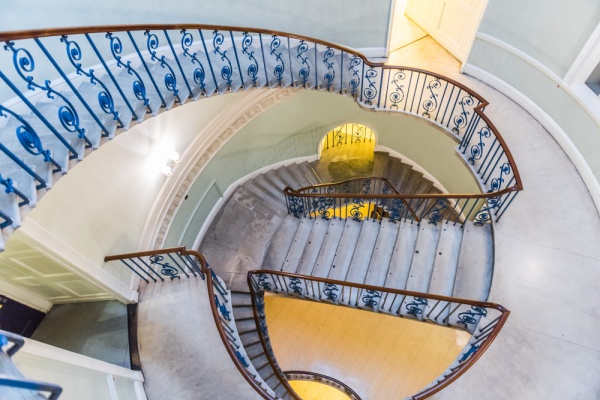 The Stamp Stair is fascinating, but the Nelson Stair is stunning! This remarkably beautiful piece of architecture rises 6 floors from the basement to the third floor. Each flight is different but together they add up to a marvellous piece of Georgian style. Chambers intended to build two matching stairs, but the eastern stair was cut from designs to save money.

The stair takes its name from the fact that it led to the Navy Board Room, where the Navy Board held regular meetings, some of which were attended by Admiral Nelson. The Board moved into Somerset House in 1789 from their offices on Seething Lane. They occupied about one-third of the building, with offices controlling the administration of ships, boatyards, stores, equipment, contracts, ship repair, and the myriad of tasks necessary to keep Britain's navy functioning.

The Navy Board looked after these 'nuts and bolts' practical tasks, while the Admiralty, with its offices at Whitehall, looked after policy and naval operations. The Navy Board stayed in Somerset House for almost 100 years, long enough that the striking staircase leading to their boardroom to be forever linked to Admiral Nelson. The Stair suffered bomb damage in WWII and was rebuilt to its original style by Sir Albert Richardson.

It is worth exploring the terrace on the south side of Somerset House. Tucked into a large neo-classical niche is a striking war memorial, illuminated at night.

It's a bit of an odd experience to explore Somerset House. The wings on either side of the central courtyard are occupied by gallery spaces, but the central block is based around a relaxing space with several busy cafes, and a terrace looking over the river. We just wandered about photographing the beautiful Georgian interiors and no one seemed to mind. 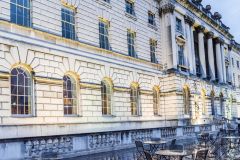 More self catering near Somerset House >>